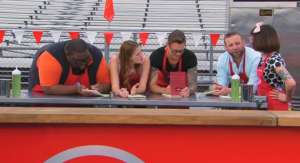 Screencap from the August 11, 2014 episode of MasterChef. Watch it now at Amazon Instant Video.

It’s “game time” for the remaining 10 contestants on MasterChef as they head out on a football field for the next team challenge. It doesn’t get any more American, Graham says. This evening there will be a football game happening and the place will be packed.

There will be two teams of 5 each that have to staff the concession stands, and the football fans will be voting for whose food is better. Courtney says it’s a perfect challenge for her as her family has been selling concessions all her life. Jaimee is Red Team captain as she had the best dish last time; that gives her first pick over Blue Team captain Courtney. But instead of picking their own team members, they will be picking for the other team! Jaimee picks Leslie first for Courtney’s Blue, then Courtney picks Cutter for Jaimee. Once the teams are complete, Red Team consists of Jaimee, Willie, Elizabeth, Daniel and Cutter. Blue team is   Coutney, Ahran, Leslie, Victoria, and Christian.

They then get to meet the players, and it’s a bunch of kids. It’s a flag football game. It will be overseen by a very very special guest: Eric Dickerson of the Rams and he’s there for the NFL 360 initiative.

They have 1 hour to prep their food for the crowds. Both teams must create a healthy burger and a fish taco. Jaimee wants cole slaw on the burger which Willie doesn’t agree with. Daniel doesn’t think the cole slaw is a good idea either, so he and Cutter go ahead with a turkey burger with thousand island dressing, and fish taco with cole slaw. Jaimee has lost control of her team from the start but she’s just not assertive enough to argue with them.

Courtney wants cilantro lime cream on the fish taco and guacamole on the burgers. Her team seems pretty well organized with everyone on the same page. This is Courtney’s first time as a captain and the judges think her team has the muscle to pull it off. Jaimee isn’t vocal but she’s a talented chef. Will she be able to stand up to the challenge? People aren’t listening to her.

The Blue Team, meanwhile, is relying on Christian for the burger mixture, but it is really wet from too many eggs and there’s no more turkey left to firm it up.

Leslie’s fish tacos are causing concern as well. Courtney thinks he doesn’t know how to season food properly and they will be too bland.

Cutter has taken over the Redd Team fish station and he’s in over his head. He can’t flip the fish without breaking it. He ends up needing some guidance in order to do it properly.

The judges taste the Blue Team food…needs seasoning on the tacos, they’re bland but the turkey burgers are nailed. Leslie was in charge of the fish and he’s going to give the judges what they want. Meanwhile, Jaime’s burgers are raw, and that’s Daniel’s fault. The fish tacos have no seasoning either and that’s Cutter’s responsibility to take care of.

It’s marching band time at the game and when the band stops, it’s time to start serving the crowds. Leslie has bins of fish yet to cook, but the kids want their food!

Courtney thinks everything is working well. The lack of leadership on the Red Team is creating chaos. “It’s like burger madness,” Jaimee says. They are falling so far behind that customers are starting to walk away with empty plates. Cutter and Daniel are fighting over where Cutter is needed – Daniel wants him on the grill but Jaimee says he’s needed up front to keep up with the serving. Someone needs to expedite and Elizabeth takes over that responsibility. It’s her chance to save her team and her winning streak.

Meanwhile, Joe is checking in with the diners and, as usual, the vote seems split. It’s still anyone’s game with one quarter left to play. Then it starts raining and they want to get food out fast.

Time is called and now the fans’ votes need to be tallied. So, which team will win under “British weather”? Two amazing teams fought valiantly, both on the field and in the concession stands. But there can only be one winning team and it’s the “closest result ever”. The winning team, with 51% of the vote, is the Red Team.

Blue Team will face pressure test. Leslie feels everyone did their job and he may just be a total loser since this is his fifth time facing a pressure test. Courtney, Leslie, Ahran, Victoria and Christian are worried about what they will have to deal with.  But, it turns out that not all of them have to cook. The person who gets to decide is Courtney. As team captain she can save herself, and that’s exactly what she does. But the judges are also going to save one more person. Leslie thinks it should be him, but they choose Christian for the hard work he did with the turkey burgers. Leslie says he gets no respect – but nobody has survived 5 pressure tests in the history of MasterChef. Will he be the first?

That leaves Victoria, Ahran and Leslie to compete in the pressure test.  Their challenge ingredient is definitely fresh: still-alive prawns. Graham wants a dish that is elegant in its simplicity: ceviche. Raw prawns with citrus juice, vegetables and herbs. Victoria is confident she can do this, no one seems to upset…yet.

But wait! Joe wants something else. Raw prawns aren’t the way to go. He likes tempura-fried prawns and thinks that’s the best way to utilize the ingredients. And you know this is coming: Gordon thinks they are both wrong. He wants broiled prawns: butterflied and stuffed. So they will have to make three dishes in 60 minutes.

There are three people cooking, but only one will remain in the MasterChef kitchen after time is called. It’s a double elimination.

This seems to be an almost impossible challenge for the cooks to complete in 60 minutes. Victoria is sick to her stomach – it’s a nightmare for her first pressure test. Ahran doesn’t want to go home, she wants to realize her dream of opening a “Korean fusion” restaurant.

The judges debate what they want from each of their requested favorite dish. With 35 minutes left, Joe wants to know how Leslie is going to do, he should have this under control.

Ahran is having problems with her prawns and she’s showing her age and inexperience, perhaps. She doesn’t know how to make the ceviche.

Victoria is most nervous about the broiled prawns because she doesn’t want to overcook them.

Ahran’s way behind and very stressed, very scared. She doesn’t know how to handle the prawns. Courtney is thankful to be safe – she didn’t just dodge a bullet, she dodged a hand grenade!

Gordon tries to give Ahran a pep talk so that she doesn’t give up, but she does not seem to have much confidence at this point.

Hands in the air and the three have to present their three dishes.  Graham is up and tasting the ceviche – Leslie is first. It’s got perfect texture, although the seasoning could be a little more. The acidity is right on.  Ahran is next. She put peppers and blood orange  in her ceviche, and there’s a lot of liquid…too much…almost pickled from the vinegar but she has made good use of the chile peppers. Victoria is next with hers, made with again too much liquid…it’s like a cocktail. A lot of onion going on. The onion overpowers the sweetness of the prawns.

Joe is next, looking at his requested tempura. Leslie thinks his is pretty good, if not as crispy as he would have liked. The shrimp are so good that the thin batter he used may have been strategic. Ahran’s is more golden brown than the others. She thinks the color should be lighter so she’s not happy with how it came out. Joe says the shrimp is cooked well and its rich. Victoria’s is very light but the shrimp inside is cooked well. It’s got a good crispyness and density, maybe better than the other two.

So, who will remain now: Ahran, Victoria or Leslie? The top 10 will be the top 8 shortly and the judges have a difficult decision to make. The first cook they will be sorry to see leave the MasterChef kitchen is…Victoria. They are very fond of her but the technical error of her raw prawns is more than they are willing to accept at this point of the competition. It’s hard to say goodbye but she’s ready to move on to what’s next for her.

Now that leaves the eldest contestant versus the youngest. It’s ironic given how much they battled each other early on. Both have grown tremendously throughout the competition, but the person going home tonight is Ahran. It’s a bittersweet moment for Leslie, who is crying almost as much as Ahran to have to say goodbye. Before she goes, she picks Leslie as who she thinks will win this season.

That leaves 8 competitors now: Leslie, Christian, Courtney, Daniel, Willie, Jaimee, Cutter, and Elizabeth. It’s definitely not the group I would have picked at this point in time, and it’s still hard for me to try to figure out who could be the winner for this season. Daniel is too obnoxious and arrogant; Willie seems too limited in what he can do even if he’s a nice guy. Jaimee knows how to cook, but she has a hard time being assertive in any group or team setting. Cutter and Leslie both look like they could be on “redemption/improvement” story lines, but as a season winner? I’m not certain. Courtney is disliked by too many viewers, and I still see her as the “sexy villain” like last season’s Natasha and Jessie, or Becky from the year before.

I think Christian could be the sleeper candidate at this point. He’s a solid competitor who for the most part stays out of the personality conflicts. He seems like a nice guy with a New Orleans background that is different from what we’ve seen before. And, there’s a cynical part of me which wonders if the producers would be looking to have a young African American man as a winner this year—not only because it hasn’t happened yet on the show, but after the tragedy of Joshua Marks’ suicide. Maybe I shouldn’t say such a thing, but I am extremely cynical about many of the decisions made on MasterChef these days, and how it is far less about cooking and far more about marketing. But what do you think?