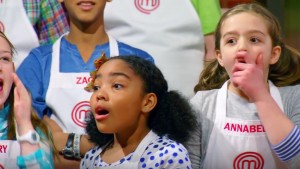 Screencapture from the November 13 2015 episode of MasterChef Junior, available at Amazon.

Last week we had our first taste of the new batch of MasterChef Junior contestants. Two went home, and 22 still remain. We may get to meet a few of the kids we didn’t get to see much of last week, including Amaya, 10 from Bergenfield NJ. She wants to win the MasterChef trophy for the girls. Everyone is excited, especially Avery who can’t seem to stop bouncing. Someone keep that kid away from the sugary donuts in the morning.

In the last challenge, Jessie, Sam and Addison had the most outstanding dishes. Everyone else is asked to step to the side while these three only have a “super sweet” challenge featuring one of Christina’s favorite things to make: a cupcake. But the cupcake she shows them has no frosting. That’s what the challenge is about: the frosting.

Christina demonstrates how to perfectly frost a cupcake.

But the judges don’t want just one cupcake from each of the three of them; they have 60 cupcakes on each of their stations, along with bowls of frosting and piping bags. The judges want as many perfectly frosted cupcakes as they can complete in 10 minutes. The cook with the most perfect cupcakes will be safe from elimination, but it won’t be that simple: “There’s also this”, Gordon tells them, as three giant frosting bags descend from the ceiling above the judges.

This is the most frosting he’s ever seen in his life, Derek, 11 and from Yardley PA, says. The winning home cook will save one of the judges from being “frosted”. Jessie is playing for Christina, Sam is playing for Graham, and Addison is playing for Gordon. She wants to win but she also wants to frost Ramsay.

Meanwhile, while the three regular judges will be awaiting their fate, they’ve also brought in a special judge to do their usual work for them. It’s MasterChef Junior winner Logan, from Season two of MasterChef Junior. He says it’s been great doing a lot of tv appearances and other fun stuff.

Does he still have enough of the hundred thousand dollars he won left to take a young lady to dinner? Gordon wants to know. He goes up to the balcony while the three get ready for their challenge. Sam is a bit worried because while he loves eating cupcakes, he’s not a baker.

Time begins. Gordon says he would be sure to fill all six piping bags right off the bat to make sure he had enough ready, but Christina would only do three because 60 cupcakes is a lot to get through in 10 minutes. Addison is already piping. Jesse is taking her time to frost her cupcakes as perfectly as possible, while Sam is moving “at the speed of light” to do as many as he can.

90 seconds are left and Addison is struggling getting the frosting into the piping bag. She needs to speed up “or else the boys are going to win”. Time is called and Logan goes down to count the cupcakes he deems acceptable at each station. Sam says he knows he has more than Jesse and Addison but they might not all be perfect. Addison thinks some of hers aren’t too pretty.

Who came in at the bottom? The lowest number was 10, and that was for Addison…giving her the honor of pouring frosting on Gordon. The frosting sure looks more like watery whipped cream than the thick frosting the kids were struggling with for their cupcakes, but whatever…

So who will get dumped on next? One chef got 11 cupcakes done, the other 29. Sam did 29, so Graham is safe from a frosted fate. That means Sam gets the advantage and Christina gets doused in frosting. Kyndall says Christina should take her shoes off first! Of course, Graham still gets covered in icing thanks to Gordon and Christina, and then Logan comes back with buckets of sprinkles to throw on the judges.

Now that we’ve had our requisite dose of silliness, let’s get back to some real competition. Gordon explains that the cupcake challenge was all about making the outside look beautiful. But now? He’s got an ingredient where you find the beauty on the inside: a beautiful, delicious scallop. It’s still in its shell so he’s going to show them how to open and prepare a scallop properly. It’s good enough to eat raw, he says, before doing just that.

Sam doesn’t have to take part in this challenge; he’s safe and gets to enjoy a giant cupcake up in the balcony instead. Victory is pretty sweet, he says. The rest have one hour to make an amazing scallop dish featuring the live scallops they’ll have to shuck themselves.

Derek says he’s a mad scientist in the kitchen and he seems pretty excited for this challenge. He’s going to combine all kinds of flavors in this dish, like Frankenstein. Tae-Ho is 12 and from Chula Vista California, right on the beach. He loves scallops and he’s doing something really complicated, he says.

Gordon says this is a tough one as scallops are tricky even for professional chefs. There are many mistakes they can make in shucking the scallops, but Amaya is doing good with three ready to go in three minutes. Ian is having trouble getting his scallops open and seems to be feeling the pressure as he breaks down in tears. Gordon goes over to him to help and show him again how to get the scallops open and give him a little pep talk.

Christina wants to know what Gordon wants to see and is expecting from this challenge. He doesn’t want to just see a ceviche, or the scallops thrown on top of pasta. It should be something more adventurous, he says. Tae-Ho says he’s making pan seared scallops over lemon risotto. Graham is worried about the cook on the scallops from these young home cooks because it should be maximum 90 seconds on each side.

Nate says he’s a huge seafood maniac, so he’s making pan seared scallops with cauliflower mash. Kamilly, who we’ve not heard from before, is making California scallop with spinach and quinoa. Vivian has never cooked or tasted scallops in her life. She’s doing bacon and corn relish with parmesan crusted scallops. She’s worried about cooking the scallops properly.

Annabelle is having trouble shucking the scallops, as she says they don’t tend to find many of them in Tennessee where she’s from. She’s making scallops two ways: ceviche and pan-seared scallops with zucchini sauce. Why not just do her scallops perfectly one way, Gordon asks her. He seems to think she’s taking on too much of a challenge.

Chad is making pan seared scallops with spaghetti and meatballs, but will that really show off the scallops enough, Graham is wondering? He doesn’t want it to just be garnished with scallops but really featuring them.

Amaya is making pan seared scallops with a bechamel sauce and asparagus. Gordon says it tastes delicious. Meanwhile Annabelle has totally burned her scallops and she can’t serve them to the judges. Does anyone have any scallops they can spare? She asks around and Avery had two she hasn’t shucked. Three minutes to go it’s time to get plating. Ian is still falling apart, Graham says; is there any way he can pull it back together? (I’m not sure I’d want to eat anything off his plate the way he’s been blubbering and practically crying into his food.)

Time is called and the judges will start with tasting Tae-Ho’s plate. He’s made seared scallops over lemon risotto with a jalapeno-poblano salsa and fried beet root and brussels sprout garnish. He says he learned to make risotto from one of Gordon’s own cookbooks. The risotto is delicious and the scallops seared on both sides. It’s a great job with so many technical aspects that he nailed.

Next is Nate. He’s made seared scallops with cauliflower mash and brussels sprouts and leaf combo with bechamel. His family has a shore house in Jersey, and while he hasn’t dived for scallops he has “crabbed for crabs”. The scallops are cooked beautifully, Christina says, the cauliflower mash could use something to zing it up.

Then it’s Chad’s turn. It’s pan seared scallops with spaghetti and meatballs – his take on Italian “surf and turf”. Graham says the sauce is good, the problem is the actual idea behind the dish. The scallop is so delicate and sweet that paired next to something like a meatball they get lost. His scallops are also overcooked.

Ian is next. First, Gordon is amazed that he got something on the plate when 10 minutes ago he’d thought Ian had given up. But he pulled it together and now has his pan seared scallops with zucchini cakes and micro greens. It looks beautiful, Gordon says. He nailed the scallops, but the zucchini needs more salt. Well done for not giving up, however.

Vivian has parmesan scallops with lemon-lime couscous and bacon-corn relish. The couscous is seasoned nicely and the bacon crispy but the scallops aren’t seared well and they get lost in the dish.

Derek has pan seared scallops over couscous, carrot puree and herb pesto. Gordon says the scallops are beautifully seared and it only needs a touch more salt. Kamilly has  California scallops on a bed of spinach with avocado lime sauce and quinoa. Christina says the quinoa is a little strange to be paired with scallops and the scallops weren’t cooked well.

Amaya has pan seared scallops with grilled asparagus and bechamel sauce. Graham says with all of this sauce on top of the scallops you can’t see their sear, so next time sauce on the bottom not to cover it up. It’s delicious, just work on the presentation, he tells her.

Finally we see Annabelle’s plate. She has scallops two ways: scallop ceviche with  lemon and cilantro, and pan seared scallops with zucchini sauce. Was she risking too much trying to do two dishes at once? Any vinegar in the ceviche? No, just water, which is a mistake and not how ceviche is typically prepared. She didn’t time the cook on her seared scallops and they are overcooked. Maybe she should have stuck to doing one dish perfectly instead of trying two.

The judges take a moment for a serious discussion on who is going home. Tae-Ho and Derek both got a lot of praise, and Amaya was close except for the plating. Chad’s was all over the place with his dish, Vivian fell short.

Tonight’s winning dish goes to Tae-Ho; they were all blown away. But as a competition they need to say goodbye to some home cooks tonight. Kamilly, Chad, Annabelle and Vivian are called to the front. Two of them will be going home tonight. Kamilly and Vivian are called forward first and while their dishes weren’t perfect, they weren’t the worst. That means Annabelle and Chad are going home. It’s a sad goodbye for both of them as they leaving the kitchen.