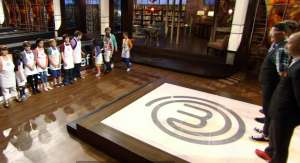 Screencapture from the November 4 2014 episode of MasterChef Junior. Watch it now via Amazon Instant Video.

So here we are, back for a second season of MasterChef Junior! After my disappointment with season 5 of the “adult” version of MasterChef this year, I was really eager to get back to some fun kids cooking—less drama, more food, or so I hoped. We’ll see how the rest of the season plays out but already I’m a little concerned about the obvious efforts to turn one of the contestants into a clear “villain” from the start. Do we really need that on a kids cooking competition? Or is it just inevitable with FOX involved in the production?

Either way, let’s get started with the recap. The Top 16 young home cooks in all of America (or at least those with parents pushing them onto reality television) are entering the MasterChef kitchen for the first time. Last year, 13-year old Alexander won the title and his success seems to have inspired an even tougher competition this time around.

We meet several of the young contestants in “confessional” moments before the competition begins. There’s 9 year old Oona, who says she started cooking when she was six. Josh, 10, says cooking is his favorite thing. Abby, 8, is impressed by the size of the kitchen. 12 year old Samuel wants to take all the cooking rules and throw them out the window.

The three judges are there waiting for them, and some of the young chefs are super excited to finally see them for real. Gordon wants to know if they are excited. “Yes, Chef!” they all answer him. All in the 8 to 13 year old age range, they are united by their passion for cooking, and they are there to compete for $100,000 and the MasterChef trophy.

There’s a very special guest who will be there with the judges tonight. Abby thinks it’s the president…but no, it’s actually last season’s winner, Alexander! The judges want to know what winning meant to him and how it’s changed his life. He enjoys being recognized by other kids on the street in New York, and soon he’s going to be traveling to Indonesia to be a judge for that country’s version of MasterChef Junior.

But it’s time now for the first mystery box challenge for this season’s contestants. They have to use what is under the boxes  on their work benches to make one incredible dish. If they win they get an advantage. Alexander chose the ingredients in their mystery boxes this time around, which seems to have some of the contestants quite excited—and worried!

They lift their boxes and find an assortment of ingredients including artichokes, brussels sprouts, apples, purple cabbage, maple syrup, pork chops, pork tenderloin, hazelnuts, fingerling potatoes, wild rice, and whole grain mustard. With that much variety it should be easy to come up with a range of different plates and indeed, Alexander has prepared 13 different dishes for them to look at in inspiration!

The 16 young contestants now have 60 minutes to make their dish. Everyone is quickly busy cooking and the judges want to check out what they are preparing. Oona is doing spicy seared pork loin with mixed vegetables and a mustard cream sauce. Natalie, 12 years old, is preparing pan seared pork chop with sauteed apples and carrots. The judges want to know about her connection to cooking and it turns out her dad owns a restaurant in California. When asked, she says Samuel may be the front runner in the competition right now. He’s doing a stuffed pork loin with pressure cooked rice pilaf.

10 minutes are left and one of the cooks, Coco, is crying…her mashed potatoes are too salty, she says, and she doesn’t know what to do to fix them. Gordon wants to help but she says she can’t do it. But Gordon says they aren’t too salty, she just must have tasted them right where she added the seasoning. She calms down and gets back to work.

It’s time to finish plating in the final minute. The judges look around at all dishes and now must choose the top three dishes for their final tasting. The first, they say, could be on one of their restaurant menus tonight…the pork is cooked to perfection…it’s Natalie’s dish.

She has a visually beautiful plate of seared pork chop with pork stock mustard sauce, potatoes and sauteed carrots. A touch more seasoning on the vegetables, Gordon says, but it has the “wow factor”. Joe says it’s delicious, beautiful, the spicing is perfect, the pork is cooked perfect. They are definitely impressed

The next dish had a lot of flavors going throughout it and made smart use of the staple pantry box…Mitchell’s dish. He’s made pork tenderloin with wild rice, fried egg and two sauces. The spice is smoky-sweet and it smells great, Graham says. It’s aggressive, bold and holds up to the pork well. Gordon loves the idea of the smoky-sweetness. It’s seasoned beautifully, but it needs maybe two more minutes cooking time.

The third and final dish had big flavors and a lot of confidence just like the home cook who made it…Oona. Samuel is jealous, he was sure his dish would have been one of the top three. Oona has a spice seared pork loin with mixed vegetables, mustard sauce and fried egg. It’s textbook, Joe says, and the only thing is he would take the skin off the apples included but the sprouts are nice and crunchy. It’s a really good dish.

“Three stunning dishes”, but who was the winner? The first young home cook to win a Mystery Box challenge this season is Natalie. She’s off to the pantry to see her advantage for the elimination test. At the end of this test, “some” competitors will be going home, but we don’t know how many. Natalie is safe from elimination and she gets to choose what everyone else has too cook.

Joe is grabbing her first choice off camera, which he then reveals is a chicken! Graham has the second choice, a duck—a bird that many chefs love but it can be tricky to cook. There’s one more choice which Gordon has…it’s a turkey. It looks like of like her grandma, Natalie says.

Which bird do they all have to cook with? Natalie’s made her choice and she’s not telling. Everyone has to go into the pantry to find out. Turns out she went for the chicken, unsurprisingly. There are chickens running all around the pantry and they smell nasty, one of the kids says. Eventually they all come out of the pantry carrying one chicken each. They do have to say goodbye to their chickens, the judges warn…but fortunately they don’t have to cook the ones in their hands. That’s good; Logan says chickens are pretty nice people. In this challenge they have all different parts of the chicken in the pantry to choose from, including wings, breasts and even chicken livers. They have one hour to prepare their dish, starting now!

It’s a mad house in the pantry as the young chefs make their choices and collect their ingredients. Coco is making chicken milanese, she says. Abby is making fried chicken with zucchini. Nasir is doing a dish with chicken drumettes and Levi sees that Nasir’s pan is smoking, his chicken is burning and he could be in trouble. Samuel is doing a dish with a foam on the plate which the judges might think is over-doing it. Oona is making chicken liver pate. The last minute is here and Natalie thinks Levi looks strong and Samuel is vulnerable.

Time’s called. Everyone’s dish looks incredible, the judges say, but how do they taste? Oona is first for tasting. She has chicken liver pate with bruleed pears. Gordon says it’s delicious. Great flair. Keep cooking like this and she could be the first female MasterChef Junior. Graham says it’s awesome.

Isabella has chicken parmesan and Gordon comments that the portion is huge…but it’s also raw inside. It’s seasoned really well but the chicken is undercooked, it’s hard to find a piece he can safely eat to taste. She’s crying as she rushes back to her station and a bunch of the other girls—and then all the other contestants—come over to give her reassurance.

Sean is next with fish sauce chicken wings and yuzu salad. Joe takes the dish over to the other judges to show off the plating. He knows how to turn $1 of chicken wings into a $20 dish, Joe says. It’s an incredibly flavored, technical dish and Sean is definitely one to watch.

Coco has chicken milanese with wilted greens and fingerling potatoes. The thick part is better cooked, it’s a little dry, but it’s a good job. Berry has Moroccan chicken with couscous and fava bean salad. Nice seasoning, but maybe she shouldn’t have boiled the chicken first.

Nasir has lemon chicken drumettes. The chicken is very dry and there’s raw spice on there, which is unpleasant. The peas and potatoes he used are the star, not the chicken, which is a problem. Abby has Mexican fried chicken with corn salad, zucchini and hot sauce sour cream. It’s delicious, Joe says. She might be the youngest in the competition but she’s got big, big potential.

Last up is Samuel. He has five-spice chicken wings with black rice, picked vegetables  and Sriracha foam.

The chicken wings are delicious. It’s one of the most technically accomplished dishes and the star is the wings as they should be.

Sean, Oona, Samuel are asked to step forward. They had the best dishes of the night. They get congratulations and are safe from elimination. They head back to their stations clearly relieved.

That leaves Coco, Berry, Nasir and Isabella. Tonight, it’s the end of the journey for all four of them. That leaves twelve kids left to compete, some of whom we hardly saw anything about in the premiere episode which means they probably won’t be lasting that much longer!

It’s hard to tell who is really a front runner just yet, although it’s a safe bet perhaps to think that Sean, Abby, Oona and Samuel should be around for a while. Samuel is clearly being set up to appear the least likable and most arrogant, which is putting me off the competition a bit. I don’t remember, in the first season of MasterChef Junior, any of the young kids being portrayed in such a light. He seems dismissive of the younger contestants and too confident of his skills and familiarity with advanced techniques. Whether that’s his real personality or just how he’s being edited for the show, either way it’s not pleasant. I hope he gets shown to be a bit more humble as the season goes on, but I have a sinking feeling we could be stuck with him until the end of the season (but not as the winner by my guess.)

No matter what, though, I’ll be following the competition every week!