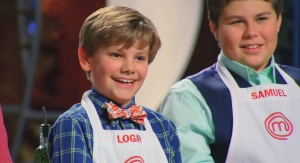 Screen cap from the November 25 2014 episode of MasterChef Junior. Watch it now via Amazon Instant Video.

Apologies for the lateness of this recap…the Thanksgiving holiday has had me busy on the road this week.

But now it’s time for the final eight competitors in MasterChef Junior to compete! Left at this point are Abby, Adaiah, Oona, Josh, Logan, Levi, Sean and Samuel. Abby says that getting this far on MasterChef Junior is better than eating all of the ice cream in the world.

The judges ask the eight what they would do with the $100,000 prize if they won it. Adaiah would buy a wall full of amazing guitars, a piano and a dirt bike—Joe says she’s a girl after his own heard. Oona would go to Vegas. Abby would buy a bunch of horse posters because she doesn’t have enough room in her backyard for a real horse.

They are facing “the mother of all challenges” today…the mother hen. In fact it’s based on eggs. They have to make sunny side up eggs, something that requires a lot of technique. Abby thinks she can do it no problem. They have oil, butter and a whole lot of eggs. Josh is making lots of egg jokes in his talking head shots. They will all have ten  minutes to fry as many sunny eggs as they possibly can to get an advantage in the next elimination challenge.

The judges debate technique in making sunny side up eggs, when and how to use the butter, how many pans to have going. Logan is going for volume while Samuel is going for perfectly cooked eggs, not quantity. Abby is only using three of her eight burners. There are two minutes to go and Levi is burning some of his. Also, a broken yolk means it’s out.

So, who has the most perfect sunny side up eggs? Time is called and now the judges must count and decide. Logan made fifteen eggs but he’s got some with split yolks, or overcooked. A lot of eggs are going in the trash. Sean made fifteen as well but how many are good?

They have inspected all the eggs so at the bottom? With two eggs, Abby. Next two had four perfect eggs: Oona and Adaih. Who got five? Josh and Levi. With seven, Logan. That means it’s down to Sean and Samuel. With ten perfect eggs it’s the eggman, Sean! Samuel had two less, with eight.

Now they each must prepare a dish using the same number of ingredients from the pantry as they made perfect eggs.

Abby knows this is not good with as she’ll only get to use two ingredients. All of them have to dream big and think about owning and running their own restaurant…what would be the signature dish they would serve? Abby’s plan is to have a restaurant-slash-vet clinic, called “Horses and Courses”. Logan’s restaurant would be an underwater bistro.

So they have one hour to make their signature dish. They will have to take the number of ingredients form the pantry as their perfect eggs. Josh is doing curry spiced duck  l’orange, he says…but how can he do it with only five ingredients. Abby is doing salmon and asparagus. Samuel is doing blood orange glazed duck breast and zucchini pasta. “Le Samuel” would be his restaurant name…he already has a plan drawn up.

Oona is doing seared scallop and a scallop crudo. Logan is doing flat iron steak with his seven ingredients. Samuel, Sean and Logan all have the most ingredients but they could be in trouble for over-thinking things, the judges say.

Sean is doing ancho rubbed rib eye with maitake mushroom reduction sauce. Sean wants to have his restaurant called the Drunken Cow because he likes to use wine in his cooking.

33 minutes are left. Levi is doing pan seared salmon with a mustard maple glaze. He thinks less could be more. He thinks Logan is going to overcomplicate his dish. As it turns out he made a foam but it deflated. It didn’t work so his dish could be a total disaster.

Abby is doing salmon with five-way asparagus. Can she overcome her disadvantage? She does have salt and pepper. Her restaurant drawing has horses on the doors with goldfish bowls on the tables.

22 minutes to go. Samuel has eight ingredients and he’s making cucumber pesto pasta. He burnt his blood orange glaze and also grabbed cucumber instead of zucchini so he had to change his original plan a bit. Josh has five ingredients for curry-spiced duck with cilantro jasmine rice. His restaurant would be be Josh’s Comfort and Bistro.

Two minutes to go and they need to be plating. Time is called and Abby is first for tasting. With two ingredients she made Broiled Salmon with Asparagus Five Ways: sauteed and boiled, fried bottoms and tops, and asparagus soup. Hopefully her salmon is perfectly cooked…and it is. Pink and glistening, Gordon says. She sounds like a chef and cooked like a chef. Joe is really amazed with her asparagus soup above everything else, how she got so much flavor out of the water she boiled the asparagus in.

Next is Sean. He had the most ingredients, ten, and he is nervous. He’s made ancho-rubbed rib eye with paprika crema, maitake reduction and syracuse potatoes. Did he nail the cook on his steak? Sadly, no. The first slice shows it’s more toward medium…not the medium-rare what the judges were looking for, Graham says. The sauce is great, though. The steak is just overcooked. Could that be the mistake that sends him home?

Next is Levi. He made pan seared salmon with broccolini two ways and a mustard maple glaze. His salmon is a little overcooked, Joe says. It’s a nice dish but the salmon needed to be cooked better to highlight the other elements.

Adaiah has yogurt lamb chop with sweet potatoes and orange sauce. She had four ingredients. She was really smart in what she got with those limitations, the cook on her lamb is great and the orange really comes through.

Oona has her four ingredient scallops two ways: seared and ceviche with ginger oil and cauliflower puree. The seared scallops are bright white…they are rubbery. But Gordon likes the crudo. Half the plate works and the other half is so overcooked. It’s a catastrophe, she says.

Logan is disappointed with his soy foam that didn’t come out right. He made flat iron steak marinated in soy and ginger with bamboo rice. Four of the seven ingredients he used he invested into spices. The shame is his rice is overcooked and missing salt, even though his steak is well cooked and seasoned aggressively. Gordon thinks it tastes delicious but he’d expect something a bit more elaborate. He had seven ingredients and it looks like he had only three to cook with. Logan is reduced to tears which means Gordon has to give him a hug and reassure him he didn’t do that bad— there’s just something missing here and he’s shown he can do better. He nailed the steak but the rice is overcooked.

Next is Josh with his plate: curried duck a l’orange with cilantro rice. He had five ingredients to work with. He wanted to add butter but he had to work around it. The orange sauce is great…not overly sweet or bitter. But the duck is a little overcooked, toward medium. Maybe getting rid of the cilantro and adding something else would have been a better idea, Graham says.

Last is Samuel. He had eight fried eggs so he could use eight ingredients, yet it looks like there are three ingredients on his plate. It’s five-spice seared duck with arugula pesto cucumber and broccolini puree. Would he have done the same with the zucchini that he did with the cucumber? No, he had a different plan for that. Gordon is glad he made the mistake because the pesto is sensational and the protein is nailed. It may look like three things on the plate but there are like a thousand things going on flavorwise. He’s cooked the duck like an angel.

So, now it’s time for the judges to make a decision. Abby and Samuel seemed to be on the top. A lot of the others struggled with the protein. Josh could have done more with five ingredients, they say.

There were two outstanding dishes…the first looked incredible despite the obstacles: Abby. But the best dish of the night was Samuel’s. Four people missed slightly on the proteins: Josh, Levi, Oona and Sean. Logan and Adaiah are therefore safe, and two others will be safe. They are Sean and Oona. That means Josh and Levi are going home. Who does Josh think will win? He says it will be either Samuel or Sean.

Next time it will be a restaurant-challenge for the final six contestants, which should be interesting to see! These are all pretty strong young chefs left at this point but the pressure of having to cook in a restaurant could really make or break someone’s confidence quickly!