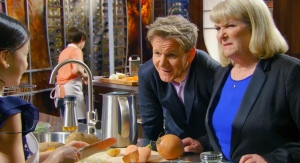 Screencapture from the November 18 2014 episode of MasterChef Junior. Watch it now at Amazon Instant Video.

There are 10 young chefs left now in the MasterChef kitchen: Abby, Oona, Mitchell, Samuel, Sam, Logan, Sean, Adaiah, Josh and Levi. The competition is just going to get harder as it’s time for their next mystery box challenge. The judges lift the top off a very large box only to reveal a second box inside the first. What’s inside that second box? Cupcakes!

There are a number of different flavors and the kids are called forward to take and taste one each: red velvet, chocolate, confetti and more.

So of course, it seems obvious that their challenge will involved cupcakes. They will have 75 minutes to make a dozen of them, and they can all be one flavor or as many flavors as they want.  They will also be making them in teams of two. How are they are going to pick teams, however?

It turns out there were five flavors of cupcakes in the box they just picked from, so the person with the same flavor as theirs will be their partner. So the match-up ends up being Mitchell and Abby, Sam and Adaiah, Logan and Sean, Josh and Oona, Levi and Samuel.

Josh is worried about working with Oona—because she’s a girl.

There is still a mystery box in front of each team. What’s inside? Two ties. It’s in fact a three legged team challenge. They will have to make their cupcakes while tied together, so they really need to work and cooperate closely. The winning team will get a “game changing” advantage. To work with, they all have essential ingredients in their boxes and a limited pantry of optional ingredients like fruit, sprinkle and more.

Their 75 minutes start.  This is the first time there’s been a tied-together challenge like this, so it’s definitely going to be interesting. Levi and Samuel are making two very different cupcakes but they think it will work together. Mitchel and Abby are doing peanut butter cupcakes and Mexican hot chocolate. Logan and Sean are doing simple chocolate with passion fruit and lemon basil cupcakes. Adaiah and Sam are doing two different flavors like everyone else and they don’t seem to be working well together. Josh and Oona would not be good dance partners, the judges observe.

20 minutes to go and everyone is doing two different flavors, 6 of each. Sam and Adaiah seem to be behind. Two minutes are left and they have to make sure to decorate. There’s a lot of frantic activity in the kitchen.

Time is called and now they must decide who had the best looking cupcakes to taste? The first featured two incredible flavors in their frostings: Adaiah and Sam, representing Connecticut and California. They have orange honey blossom and vanilla cupcakes with raspberry. It’s a great combination of colors and they look beautiful. Light, crispy and absolutely delicious. They started off a little awkward but nailed it once they got their rhythm. Joe says it’s the kind of cupcake he would spend money on. A great example where it was a good that was greater than either on their own could create.

The next team also delivered some incredible looking cupcakes. Virginia and Califorina: Abby and Mitchell. Time for the moment of truth and how they actually tasted. They have Mexican  chocolate and chocolate and peanut butter inspired cupcakes. Graham says the cook is nice and moist. Delicious, he loves peanut butter. But what he likes better is Mexican chocolate. The only thing he’d do different is make sure the tops of their cupcakes were completely covered with frosting (to my eyes as a viewer they looked pretty sloppy!)

The last team up were sophisticated and impressed the judges with their culinary techniques. The best of Santa Anna and Memphis: Logan and Sean. Joe wants to know what he will see when he opens their cupcake box because it has to be “Bam!” Wow, he says. They have basic lemon and chocolate raspberry with passion fruit icing and caramel on top. They’re light, assertive in lemon flavor with a very, very moist cake. Sean is the only one with a filling in his cupcakes: passion fruit butter cream. They’re absolutely beautiful and the sugar work is amazing, Gordon says. It illustrates great team work, good job.

There can only be one winning team who gets to go in the pantry. Who will it be? It was a difficult decision but the winner is Logan and Sean. They are now in control of the next elimination challenge. For this challenge they will have to cook another time…but not today! They are in the top 8 for sure.

Every kids loves their mom’s cooking the best, the judges say. Gordon’s mom made the best dishes, and who is coming in the pantry that night to join them but Gordon’s mom Helen! She has three of his favorite childhood dishes: chicken curry, shepherd’s pie and fish finger sandwiches. Which one of his favorite childhood dishes will everyone be making? The judges want an elevated version of the dish. Their final decision, after debate, ends up being the shepherds pie. A savory filling topped with mashed potatoes. Oona has never made or eaten one before, and that seems to be the case for a lot of the kids. They have a special treat waiting for them all in their station drawers. They have a surface tablet to call their own moms via skype and get advice on how to make their dishes.

They only have 60 minutes to make their pies and they will be saying goodbye to two more cooks tonight based on the results.  It’s off to the pantry as everyone starts shopping frantically. Levi “overshopped”, Sean and Logan think.  Mitchell is using celery root to give his an earthy taste. The judges think this is a tough one to elevate and serve restaurant style instead of family style. Sam has to restart the potatoes due to too much milk, and he seems to be having a breakdown over it.

Graham comes over to try to help Sean out by telling him how to combine the peas and his potatoes to fix the error. Oona is adding garam masala spice to hers which Gordon and his mom seem to like. Samuel is doing a deconstructed shepherds pie. Is that how he is elevating the dish? Joe wants to know. He says yes. We’ll see how it comes out.

Five minutes are left. Levi looks strong, Gordon’s mom says. Ahaiah is doing something sophisticated and different, Graham says. Samuel’s looks good but Logan and Sean are  worried about the meat in his. Oona looks weak, Logan and Sean says. Sam broke glass in the pantry and still seems to be frazzled.

Time is up. First up for tasting is Oona’s. She says it’s the worst she’s ever made: a curry shepherd pie with beef and sausage. Visually it looks messy, unfinished. The potatoes are nice but the meat is slightly greasy. It’s the first time Gordon’s seen her really struggle. Oona’s crying when Joe comes up for tasting. The plating was on the rustic side but the potatoes are better than good. In the effort to elevate she fell back. She thinks she is going home for sure.

Abby is next with her shepherd’s pie with pumpkin, sweet potato puree and truffle butter over the beef, chorizo and lamb mixture. It maybe needs a bit more seasoning, Gordon says but otherwise it’s delicious.

Samuel has Moroccan shepherd’s pie with parsnip mashed potato and parmesan frico. The ground beef is cooked beautifully. He’s starting to separate himself from the pack. Josh has deconstructed shephed’s pie with a pea and carrot garnish. It’s quite spicy and the presentation is lovely.

Levi has his shephed’s pie with lamb and parmesan potato mash.  It’s firing on all cylinders and Joe loves it.

Mitchel has his shepherd’s pie with celery root mashed potatoes and a herb sauce. Visually it’s not his most attractive looking dish. It tastes really strange…like a chopped up burger and the mince is very dry. It’s not his best performance, Gordan says.

Next is Adaiah with her shephed’s pie “Napoleon” with two sauces on the plate—one for Gordon and one for his mom. Graham says it’s delicious: the sauce, everything exceeds their expectations.

Last is Sam with his shepherd’s pie with pea puree, ground beef and mashed potatoes. Visually it’s intriguing but the big problem is the ground beef is very dry. The mashed potatoes on top are delicious so well done for bouncing back, Gordon says.

So, great job given the pressure of Gordon’s mom being in the house, the judges say. Everyone says goodbye to Helen, who gives them some last bit of advice before she goes. Now it’s time for the judges to make some very serious decisions. Adaiah’s was kind of amazing. But Levi was super traditional and nailed it. Who had the best?

Two dishes in particular stood out. Congrats go to Levi and Adaiah, as expected. But based on tonight’s dishes they will be saying goodbye to some home cooks. Called forward are Sam, Oona, and Mitchell. They did an amazing job, but since it is a competition, not everyone can move forward. Based on those dishes, Oona is going back to her station. That means Sam and Mitchell are going home.

All in all this was a pretty enjoyable episode to watch, nice to see both a sweet (cupcakes) and savory (shepherd’s pie) featured in the challenges. I only found one thing uncomfortable, and it’s been something I’ve noticed several times this season. Is it just me, or are these kids crying a lot more this time around, every time one of them makes any kind of mistake or is having a difficult time? I don’t remember so many tears falling in season one, and to be honest I don’t find it enjoyable to watch young children so stressed out and reduced to tears over cooking. It seems to speak to me of the pressure and stress of the competition, not the fun that seemed to infuse more of it last time around. But maybe that’s just me…