This review was originally published on the Yahoo! Contributor Network on June 10, 2010. 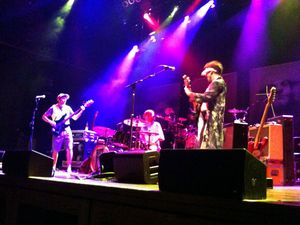 Les Claypool played Showboat’s House of Blues in Atlantic City, New Jersey on June 6, 2010. Scheduled against Game 5 of the Stanley Cup Playoffs between the Philadelphia Flyers and the Chicago Blackhawks, turnout for the show was rather sparse to be generous. Even so, both Claypool and support act Hot Head Show put on great performances well worth seeing–and worth missing the game. This concert was the second time I’d seen Les on his Of Fungi And Foe tour, the last being shortly after the release of the album in Spring 2009. The material sounded tighter than ever a year later, and this was easily one of the best Claypool shows I’ve had the chance to see.

Hot Head Show, a terrific trio from London, England, opened the set at 8pm. I previously wrote about them as the best band you’ve never heard of, and that evening’s performance cemented my opinion of the band. Singer/guitarist Jordan Copeland, bass player Vaughn Stokes, and drummer Maxwell “Beatamax” Hallet put on an energetic set which ran for about 40 minutes. Their ska/funk/blues-rock went over well with the small crowd of early arrivals at the House of Blues, although not many were up to attempting Jordan’s complex sing-a-long calls. The more knotty and syncopated the rhythms of bass and drum, however, the more Claypool’s fans cheered on the band. The only time Hot Head Show lost the crowd was when they had to slow it down for a bass solo to correct a sound problem with the amps. Some tried to disrupt their performance at that point with a round of Flyers chants, which the band ignored. Featured in the set were great numbers including “Donkey,” “Chopstickabean,” “Hotel Room,” “Bummer,” and “Bambini.”

The room at the House of Blues began to fill up after Hot Head Show finished, but the crowd barely reached the soundboard halfway back on the floor and the upper seating level looked sparse. Normally I avoid being in general admission at a Les Claypool show as the crowds can get rowdy and even violent with crowd-surfing and slam-dancing, but the mood this night was fairly serene. Claypool came on stage at about 9:15pm and kicked off with a rocking version of “Rumble of the Diesel.” One could tell quickly it was going to be a good show. The sound in the room was excellent, making it easy to hear the complexities of Claypool’s playing and the skill of his band members, comprised of a cello player and two percussionists. As the room was so empty I wandered about to get different views of the stage throughout the night and to have the space to dance around–which may not be the easiest thing to do to Claypool’s complicated music, but his bass-playing always gets my feet moving.

Featured in the set list were several songs from Claypool’s 2009 release Of Fungi and Foe, but more was drawn from his older albums such as Purple Onion, Of Whales and Woe, and Highball With The Devil. Highlights were incredible versions of “Southbound Pachyderm,” “Buzzards of Green Hill,” “Calling Kyle” and “D’s Diner.” Even the drum solo, which sometimes can be tedious at Les shows, was really tight and rocking this night. Claypool had fun ribbing the crowd several times as the Flyers went down for the count to suffer a 7-4 loss that night–many were keeping up on the score by checking their iPhones throughout the show. He teased the audience with a brief snippet of Pink Floyd’s “Goodbye Blue Sky,” which I would have loved to hear him perform entirely. Claypool’s covers are always a lot of fun.

Les finished up sometime around 11pm, putting on a solid set of nearly 2 hours of music. Overall it was a great concert and I would gladly return to the House of Blues in Atlantic City to see another show there, as I really enjoyed the venue as well. Les Claypool’s current tour wraps up June 11, 2010 at the Bonnaroo Festival in Manchester, Tennessee. After that, he’ll tour with Primus in July through September, supported by Gogol Bordello.