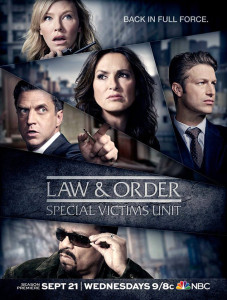 Why is it that this series has had such lasting appeal? For many today, it is “the” series in the L&O universe to which they have the strongest connection. Indeed, entire generations of fans have grown up alongside Olivia Benson, Elliot Stabler, Odafin Tutuola and the rest of the SVU detectives and prosecutors. Turn on the TV and it seems as those there’s almost always a station playing a marathon of SVU episodes, with stories that feel as relevant today as when they first aired. The series was even adapted into a Russian version, Law & Order: Division of Field Investigation, showing the international appeal of these characters and stories.

I personally can recall watching the original pilot episode, “Payback”, when it first aired on September 20, 1999. Like many, I’m sure, my initial interest was out of perhaps a certain prurient curiosity. A series all about “sex crimes”? Sounded a little racy. I wasn’t actually a regular Law & Order viewer already, but I just had to give this new show a try. Eighteen years later I’m still watching, even if I did drift away from being a regular viewer for some years before getting “hooked” again a little over a year ago (thanks, mostly, to those endless marathons on USA network reminding me how much I loved the show.)

As mentioned in the early behind-the-scenes promotional video above, what set SVU apart from its predecessor right from the start was its stronger focus on the personal lives of the detectives in its unit, instead of being a strict procedural. This allowed viewers to quickly connect with the characters and become interested in their stories as much as each week’s “whodunit” mystery. Many young women came to look up to Mariska Hargitay’s Olivia Benson as a personal hero—a woman who could be a deeply sympathetic and understanding detective, trying to balance her personal life as a single childless woman with her professional career. She also had to deal with her mother’s alcoholism and the fact that she herself was a child born out of rape, with no knowledge of her father (at least, as the show began.) Her partner, Elliot Stabler, had to balance his own life as a devoted Catholic husband and father with the dark nature of the crimes he investigated. The two made for an intriguing pair right from the start—and for many, the simmering romantic/sexual chemistry between them was a huge part of the series’ appeal for the twelve seasons they starred together (and has left some wondering still if we’ll ever get a reunion before the show is finished!)

For others (such as yours truly), it was the acerbic wit and dark humor brought to the show by Richard Belzer’s Detective John Munch that added a touch of much needed lightness to the proceedings. Munch was a character originally developed for and featured on the critically acclaimed Homicide: Life on the Street. Belzer first proposed joining the cast of Law & Order as Lennie Briscoe‘s new partner when Homicide was cancelled and Benjamin Bratt had left his role of Rey Curtis. But as producer Dick Wolf had already cast Bratt’s replacement (Jesse L. Martin as Detective Ed Green), Munch landed in SVU’s 16th precinct instead. In season two, he ended up paired with Ice-T’s character Odafin Tutuola, a dynamic that added wonderfully to the show for the many years the two partnered together.

SVU has continued on through the addition and departure of numerous other characters, including the now incredibly popular ADA Rafael Barba, as portrayed by Raúl Esparza since season 14. Executive producers have come and gone as well, leading to changes in direction and style throughout the years—some changes embraced by fans, others not so much (the verdict on Season 18, now headed by former Law & Order writer and co-executive producer Rick Eid, is still up in the air.) But what hasn’t changed is how the show continues to tackle and bring into the mainstream important and difficult issues about sexual consent, gender identity, hate crimes, child abuse, and mental illness. It can be fascinating to see how societal ideas have changed and progressed over these near two decades, in comparing how issues like violence against transgender individuals, male rape victims, marriage equality and crimes on college campuses were dealt with at the beginning of the century, in early season episodes, versus now.

The show has also continued taking on “ripped from the headlines” story lines as well, albeit with sometimes mixed results. (A season 16 episode tackling GamerGate, for instance, is universally considered one of the show’s worst ever. And an episode filmed for this season, seemingly inspired by Donald Trump and the rape accusations  against him during the 2016 campaign? Has been indefinitely shelved as of the writing of this article.) No matter what, the show still provides ample material for debate, discussion and reflection among viewers, always eager for that “SVU twist” and guessing what will happen next.

And no matter what, I’m sure I’ll be watching the show to its bitter end, whenever that may be. In the coming weeks, I will be continuing a series of articles on SVU in honor of its 400th episode* milestone. Specifically I’ll be looking back on the show season by season, its highs and lows through the years, and why it’s worth revisiting so many of those great classic episodes today.

*Technically, it will be the 399th episode aired due to scheduling issues and changes this season. But, who’s really counting, right?