Why is Kate Greenaway still popular?

Catherine (Kate) Greenaway is one of the most influential illustrators of all times. Her portraits of children are among most used and copied from the so called Golden Age in children illustration and the most prestigious reward for work in the field of illustration in Great Britain has her name. 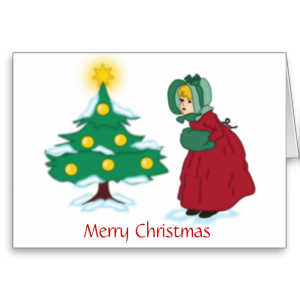 What is so special in her books for kids which are so popular at collectors? Why it seems she managed to catch the moments of childhood so well despite the fact she never married or had her own children?

The innocence of childhood

Catherine was born on 17 March 1846 to John and Elizabeth Catherine. Her father was pretty successful wood engraver and draughtsman. Her mother was a skilled seamstress. This two occupations fused in very special result: Kate Greenaway’s illustrations of kids wearing her signature clothes in post Regency era style. But first things first.

John Greenaway who worked for Punch and Illustrated London News got huge commission as engraver for works of Charles Dickens. This looked as chance of a lifetime for a man who struggled to support his large extended family, so he decided to set the family at relatives in Nottinghamshire’s countryside.

Kate lived almost idyllic childhood. Her happy memories helped her to create illustrations of innocent, wide-eyed looking kids, surrounded with colorful flowers and lively birds. She was home schooled but family supported her artistic aspirations and she enrolled in art school at the age of 12. In just few years her talent combined with hard work got her first rewards and commissions. 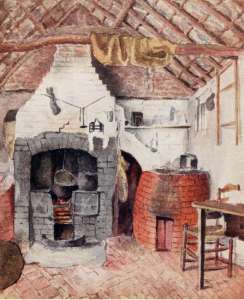 Kids in the second half of 19th century were no different than kids in any other era, but we can mention at least one symbolic moment of their lives – getting trousers (boys) or long dresses (girls). Kate at one occasion recalled a memory on her own firs long dress. When she got it, she started to cry.

She wasn’t happy about the idea of growing up and with her illustrations she actually found a way to stay a child for the whole life. We can recognize her in portraits of the children who were too young to get ‘real’ clothes and characteristic poses of characters in her illustrations always bring some kind of nostalgia.

KG, as she signed her work in most cases, managed to keep her inner child alive through her work and even as established artist (her first illustrations for postcards were sold in thousands) she never stopped wondering, playing or learning. After about already about 30 illustrated books she decided to write her first one: Under the Window. It was 1879.

It should be no surprise to find out she decided to make a book of rhymes, or, as the subtitle said: ‘Pictures and Rhymes for Children’. Under the Window was her first collaboration with Edmund Evans, who had already succeeded in the field of color printing (with Walter Crane as illustrator). Optimistic 20 thousand copies were sold out in few days and Kate became a star.

Title illustration from Under the Window

You can find more illustrations from some of the Kate Greenaway’s most popular works here.

With money earned with Evans Kate bought a new house and finally arranged a proper studio. She painted and illustrated children for her new projects which she never run off. Her models were often dressed in clothes designed and sewed by Kate who learned many tricks of the trade from her mother Elizabeth many ears ago.

When John’s earnings were not enough, Kate’s mother opened a dress shop. At first she was offering only clothes for kids but soon she exapanded business and even hired helpers. Kate Greenaway got plenty of chance to observe how people dressed and what they liked most. Being influenced by John Hoppner and Regency era she later designed and created her own clothes for her mannequins.

Despite the fact these clothes were almost a hundred years out of fashion, her illustrations made them so popular, mothers wanted to dress their children just like the kids in Kate’s books were dressed. Well known department store Liberty of London created a whole line of kids’ garment inspired by her drawings and create sort of Regency revival. 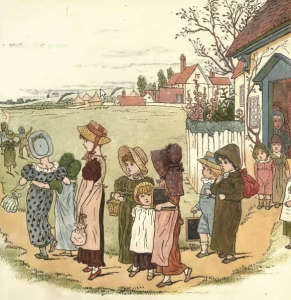 If nothing else, this fashion fad proved the tremendous influence of Kate Greenaway’s illustrations. Together with Walter Crane and Randolph Caldecott she is considered as the top illustrator of the second half of 19th century and one of the most influential artists related with children literature ever. She died on 6 November 1901 of breast cancer.

Few months before she had written a poem called Death and made a painting with the same title. 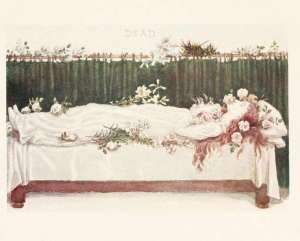 All used images are in public domain except the first one, which is used by permission of the artist.