Is It Worth Trying To Start Up a New Fan Convention?

Or are small, fan-run conventions becoming obsolete in this internet age? 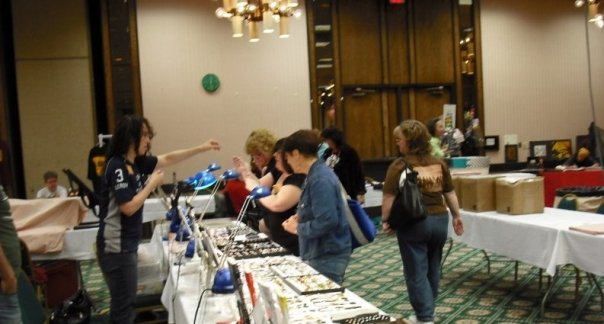 As someone who has attended, and vended, at numerous fan-run conventions for almost twenty years now, of course the thought has occasionally crossed my mind to put together and run my own convention some day. This thought has grown more and more appealing as I’ve watched many of the conventions I used to love and attend regularly wither away and die over the past decade, even if for numerous understandable reasons.

But would it be a worthwhile idea? Or are the days of convention-going on a small scale dying out, replaced by the internet and the “mega” commercial conventions like ComicCon and Dragon*Con?

Image credit: In the dealers room of MediaWest convention, 2008. Photograph of the author, sockii, at work. Used with permission of the original photographer.

For one, hotel space is getting more and more expensive making convention memberships prohibitive. Many hotels no longer want to rent their prime ballrooms and meeting rooms out for an entire weekend to a convention when they could get in numerous single-day events, weddings, or church groups instead.

The fans who ran conventions for years – even decades – are growing older, burning out, in some cases sadly passing on.

The fans who know the fun of attending traditional, smaller fan cons are growing older, too, and younger fans don’t necessarily understand why they should bother to attend a convention in this internet age. After all, who needs discussion panels when there’s the internet and various forums, fan pages and Tumblr? Who needs an art show when there’s deviantART? Who needs vid shows when there’s YouTube?

Even so, I miss the days where I could spend a weekend with like-minded fans sharing our favorite series and engaging in face-to-face discussions about them. Every time I attend a convention, I always end up leaving energized and enthusiastic about fandom again. But these days, the conventions I attend are just fewer and fewer. Dragon*Con has gotten so huge and so expensive, and so commercial, I just can’t justify the cost of attending (let alone vending) this year. I still get to MediaWest*Con every year, but along with SHarecon those are about my only two “can’t miss” cons I have left on a yearly (or bi-yearly) basis. PhilCon I sometimes attend, but it’s not quite my crowd, more old fashioned book sci-fi fandom than media/fic-based fandom, which is more my interest. Out my way here in the Eastern PA/South Jersey area, we do have Tribal Forces, but I can’t make it most years because of timing (it’s typically over my partner’s birthday and smack dab in the middle of tax season.)

Other conventions I used to love and enjoy that are no longer: Zebracon, Eclecticon, Eastern Media Con. Where I used to have a full schedule of 10-12 conventions to attend and work a year, right now I’m lucky if I have 2 or 3.

So yes, the chronic organizer in me keeps thinking about trying to start up something new, even if very small. It’s just finding the time to work on researching possible locations, gauging interest, and trying to think of perhaps a different way of doing things to try to reinvigorate the idea. At one point I had been considering the idea of more of an “unconference” or BarCamp style meeting, where there would not necessarily be a set schedule but a participant-driven gathering that could work better for a smaller group (or an unconventional meeting space). But I got some resistance to that idea from some of the people I talked to, who didn’t like the idea of going to a fan con without knowing in advance if their particular fandoms would be “represented” in the panels and other programming.

Location-wise I am targeting (when I think about this crazy idea) the South Jersey area between Philadelphia, PA and Wilmington, DE. I see some good reasons to explore this area (besides the fact it’s close to where I live):

However, I still need to spend some time getting some actual prices and investigating meeting spaces, and also see if there are any alternative spaces that could be available as well – besides hotels.

In any event, it’s an idea I’ve been kicking around in my head for at least 2 years now, but life keeps getting in my way of seriously trying to plan anything. Perhaps I’ll try to get more serious about it this coming fall/winter so I can plan something for 2015 – since we have a couple East Coast cons which are always held in even-numbered years but not in odd-numbered ones. We’ll just have to see if I’m crazy enough to follow through on it, I guess…!

More articles on conventions by sockii

Slash Conventions and Slash-Friendy Conventions in the United States
For many years – indeed, for several decades – fans of slash fiction have gathered at conventions around the world to talk about and share their passion for …