Hugh Laurie raises the roof at “The Kes” 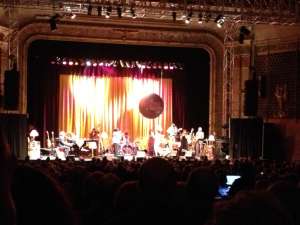 Wednesday night at the Keswick Theatre, British actor Hugh Laurie brought his musical side – and talents – to a sold-out crowd in Glenside, PA. Backed by the incredibly talented Copper Bottom Band, it was an over 2-hour show of music and laughter celebrating classic New Orleans jazz and blues.

Laurie is perhaps most famous to American audiences these days for his 8-season run on House, and certainly there were a few “fangirls” in the audience thanks to the popular TV drama. But it was a mixed crowd overall of jazz lovers and Laurie fans new and old, and I doubt any of them left the show disappointed. He lead the other seven members of the Copper Bottom Band – and the engaged audience – on a tour of jazz’s roots and greatest early legends, from Bessie Smith and Lead Belly to Ray Charles and Kansas Joe McCoy.

The evening started out on a rollicking note with the always popular “Iko Iko”, where Laurie alternated between a jerky, joyful dance and bouncing performance on the piano. Right after that opening number, he invited the audience to sing along to “Let the Good Times Roll”, which did the trick of warming everyone up for the long musical journey ahead. He switched off vocal duties regularly with the incredible Sister Jean McLain (who blew the house down with her incredible version of “Send me to the ‘Lectric Chair”) and Gaby Moreno, who particularly shined on a version of “The Weed Smoker’s Dream” that sounded straight out of a Prohibition-era speakeasy.

The entire ensemble of musicians were a delight to see and hear all night long, particularly Elizabeth Lea on trombone and Vincent Henry on sax who stole the moment numerous times with their power and passion. Laurie himself proved to be more than capable on the piano and also with his own vocal performances. While he might not have a “perfect” singing voice, his love for this music and these songs come through in every note he played and sang. His understanding of blues and the jazz also came through clearly – he was an integral part of the band, not just a “passenger” being transported (or propped up by) the other musicians. 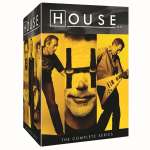 “House, M.D.: The Complete Series” on DVD. Buy it now on Amazon.

Hugh was also a perfect “host” for the evening with his humorous banter with the crowd, introductions to the various songs being performed and gracious admiration given to the other members of the band. His impeccable comedic timing and gift for physical humor frequently had the crowd laughing as much as they were cheering on the music – notably when he got up for a duet and tango with Gaby Moreno on the sexy “Kiss of Fire”.

The show was well-paced also, with frequent alterations between high-energy numbers like “Junco Partner” and the slow-burn of “I Hate A Man Like You”. The Keswick itself was an ideal venue for the show, small enough to still feel intimate even in the back of the hall, offering great views of the stage and terrific acoustics no matter where you were seated. One of my friends declared the show “worth every penny” as we were leaving and I have to agree. I wouldn’t have missed it for the world and I  hope the Copper Bottom Band will come around on tour again some day. If you have the chance, don’t miss them!

Enjoy a taste of Hugh Laurie and the Copper Bottom Band…live!

A few videos of the band in action, courtesy YouTube 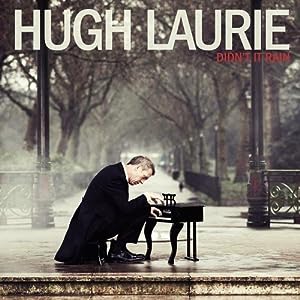