Life and works of Harry Clarke, the master of stained glass

The early years of Harry Clarke

He was born on the Day of Saint Patrick, 17 March 1889. So it is not surprising to know his full name was Henry Patrick Clarke. He was the youngest son of Joshua and Brigid. His older siblings were Walter, Kathleen, and Florence.

Clarke is today known as an important book illustrator but even more impressive is his work in the field of stained glass design. He is not only the most known designer of stained glassed windows in Ireland but one of the best in this specific art form in the world ever.

Let’s explore Harry Clarke’s beautiful illustrations and try to understand the passion which drove him to create so many powerful works and eventually led to his early death. 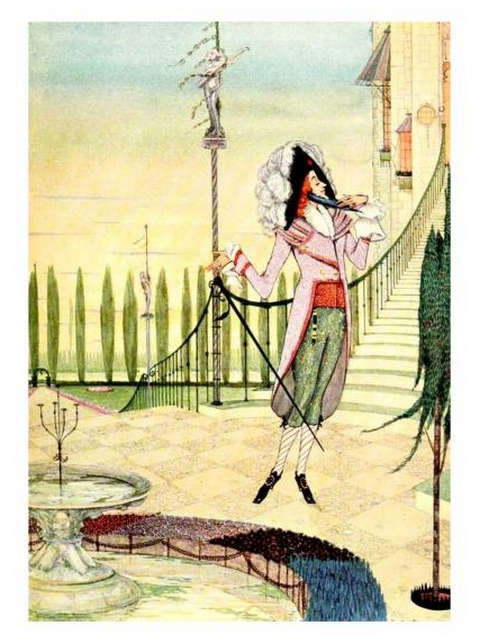 Bluebeard is in this case titled as Blue Beard

(Illustration from the Bluebeard story)

Joshua, Harry’s father changed his name from Clark to Clarke when he converted from Protestantism to Catholicism to marry Brigid McGonigal.

He moved from Leeds to Dublin to start a business with church decorating items which was soon expanded to the production of stained glass.

Harry’ mother Brigid who suffered from lung problems died at the age of 43 when he was 14 years old. Harry and his older brother Walter had problems with lungs for most of their lives too. Walter Clarke also died only 43 years old.

But before that both Joshua’s sons worked in their father’s workshop (named Joshua Clarke & Sons) and after his death, they continued with business.

Even their children stayed in stained glass business decades after Walter’s and Harry’s deaths!

For about a year he was studying architecture at Thomas Francis McNamara, who advised him to give up architecture and focus on art.

He started working in his father’s workshop under the guidance of William Nagel by day and studying stained glass in Dublin’s Metropolitan School of Art as a pupil of Alfred Edward Child.

We have to mention one more important influence on Harry Clarke’s artistic development. In 1907 he saw paintings by Aubrey Beardsley at the exhibition and this certainly made a large impact on him.

Several years later he even illustrated the same work (humorous epic song The Rape of the Lock) as Beardsley but Clarke’s version was never printed.

There is even speculation it was originally meant exclusively for a private client anyway. 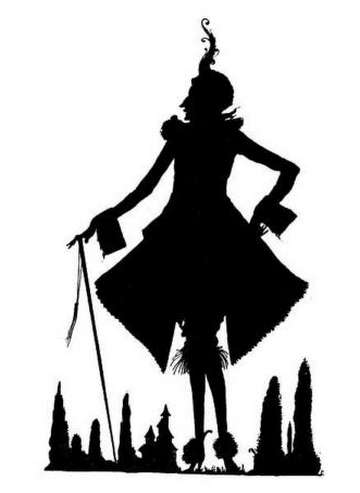 Clarke was master of black and white contrast

Silhouette of Riquet with the tuft 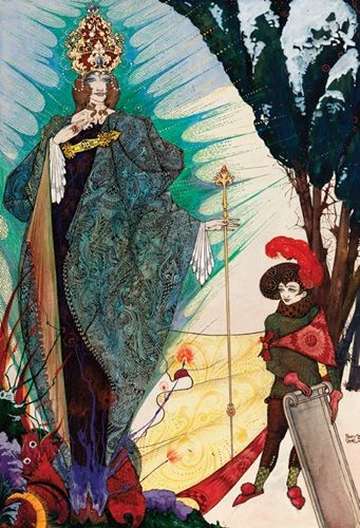 The first book illustrated by Clarke’s was Hans Christian Andersen’s Fairy Tales. After several rejections, he got this job for George Harrap who later published more of Clarke’s books for children and adults.

His illustrations are special for many reasons. The use of color is one thing, the absence of using the perspective which makes the images two dimensional and helps to fuse the images with text is another. The Fairy Tales by Charles Perrault is Clarke’s second and last book for children.

After graduation, he got a scholarship to visit France. Medieval cathedrals, especially the one in Chartres made a life-long impact on the aspiring artist. It is not hard to recognize the magic effect of deep blue and ruby red in his works.

Wide-open eyes, delicate elegance, radiating power, saints staring at miracles, using light coming from different angles to express and emphasize the emotions… All these stayed part of Clarke’s artistic expression even when his style turned to grotesque, which can be clearly seen in illustrations of Goethe’s Faust – he designed image of Faust after his own!

It is obvious Harry Clarke’s characters can look innocent, ethereal in some but sneaky and evil on other occasions.

Maybe we can find the reason for this dual angelic/demonic part of his works in his early education.

Joyce’s setting for his Portrait of the Artist as a Young Man was this very school known by its strict Catholic doctrine about sin, damnation and fight against dark forces. 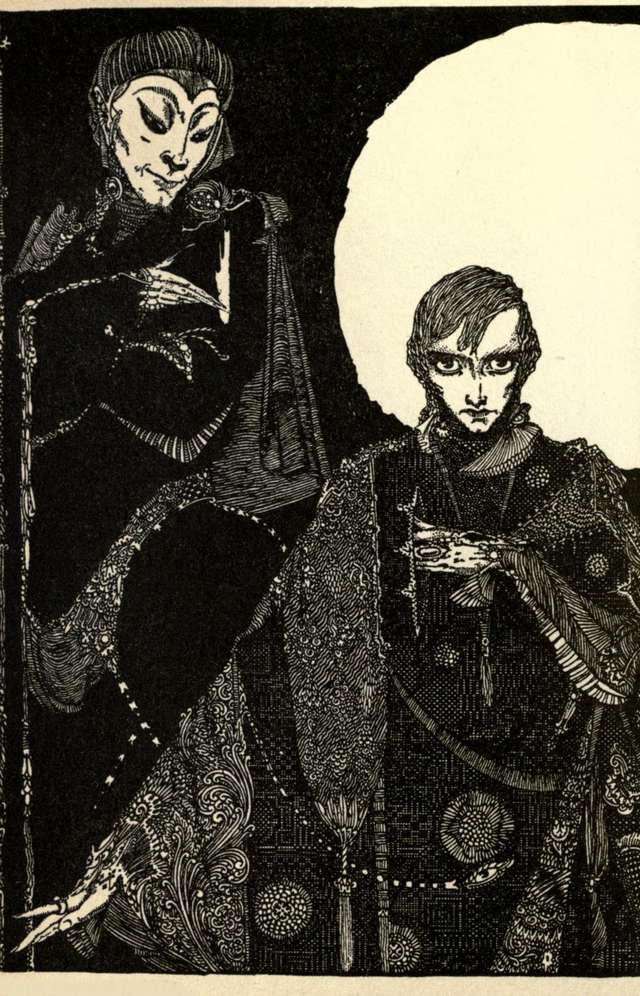 Harry Clarke loved to include self-portraits into his illustrations

Harry Clarke was paying special attention to every single detail and window never made out of his workshop if he wasn’t 100 percent satisfied with the result. Of course, the beauty of stained glass is depended on the position of its display.

Harry visited the locations where windows should be built-in to estimate the effect of light and shadows as much as possible, but traveling didn’t go well with his weak health.

After a diagnosis of tuberculosis, Harry Clarke visited Switzerland several times to improve his health. He died in sleep in Coire, Switzerland on 6 January 1931. He wasn’t even 42 years old.

Geneva Window is Harry Clarke’s most controversial work. It was ordered by the government of Ireland for the International Labour Court in Geneva. Harry Clarke spent years for making this masterpiece, but the customer wasn’t satisfied with the result. 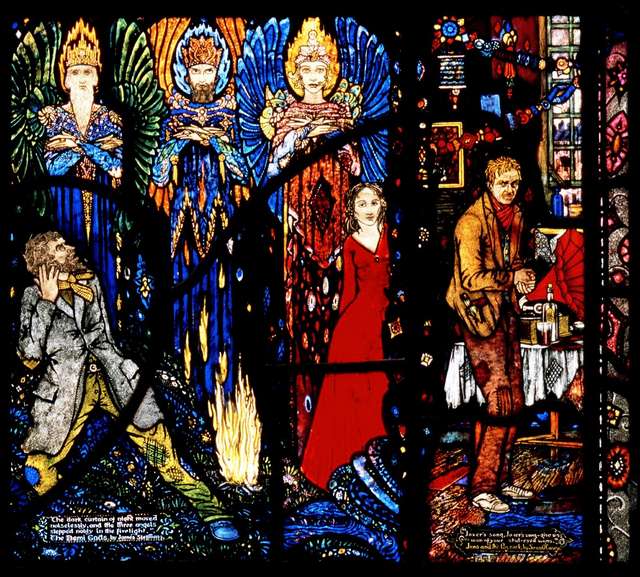 Geneva Window didn’t fit with conservative views or official Ireland. Famous scenes from Irish literature were recognized as inappropriate. Authors like O’Flaherty and Joyce were already blacklisted as too decadent and some of the chosen writers were not in favor because they were Protestants.

The most problematic scenes were O’Casey’s with Joxer (panel 4 – right half) and O’Flaherty’s with Mr. Gilhooley (panel 6 – left half). First was found offensive as it might portray typical Irishman as a drunkard and the second was too explicit because the dancer is taking her veil off.

Harry Clarke died before he found out about the government decision on the window. It was paid after his death but never made to Geneve. Harry’s widow Margaret bought it back about a year later and after decades of display in galleries in Dublin and London until it was finally bought by private collector Wolfson.

It is now permanently displayed in Miami, at the University of Florida. 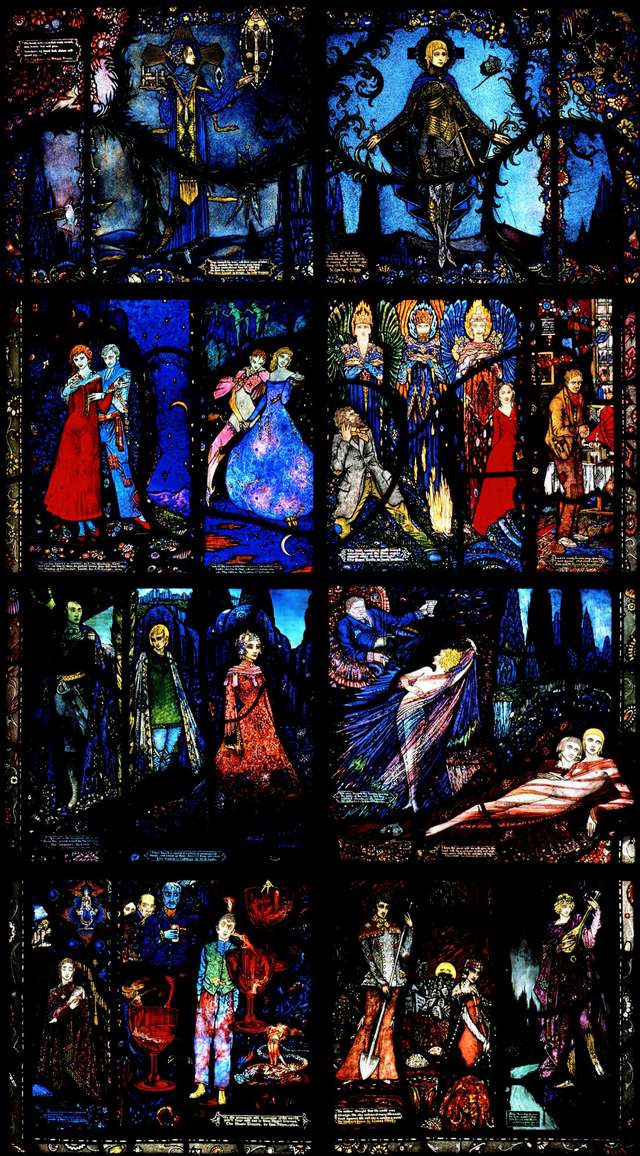 Harry Clarke Studio continued to work until 1973. There were both Harry’s sisters, Harry’s and Walter’s widows and all children involved in business and although they didn’t lack skill and commissions, it is clear the genius of Harry Clarke was lost and the Harry Clarke Studio became a conventional workshop.

All used images are in Public Domain. Resources: