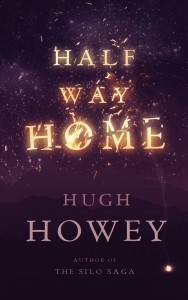 Half Way Home by Hugh Howey. Available at Amazon.

In the future, there is no faster-than-light travel, no wormholes to speed the exploration and colonization of other worlds. Instead, nations send out colony ships filled only with 500 blastocysts, ready to be nurtured into life if a planet is found to be hospitable to human settlement. If the colony’s A.I. determines the planet cannot successfully be colonized, these blastocysts are “aborted” and all traces of the colony destroyed. If it appears viable, the blastocysts spend thirty years growing and learning in animated suspension, to be set forth on the world when they are thirty years old and their world is prepared for them.

But sometimes things aren’t as simple as settlement or “abortion”. That’s what 15 year old Porter and his fellow colonists find out when they are awakened prematurely, their home on fire from an aborted, well…abortion. Of the 500 meant to settle this world, less than 60 of them escape death to find a world not quite ready for them, nor they for this struggle of survival. Why did the A.I. start to abort their colony, and then change its mind at the last minute to spare some of them? And why are some of the survivors so insistent to put building a rocket ahead of their basic survival needs? This is what Porter and his friends need to figure out, if any of them are going to survive.

Half Way Home is a book that begins with a great premise and captured my interest straight away. Hugh Howey is wonderful at creating unique visions of the future and building tension and drama, here in a work which is reminiscent of both Lord of the Flies and The 100. There are also elements reminiscent of Howey’s wonderful Silo Saga series, with the young adults having trained (while in amniotic suspension all of these years) for very specific tasks and jobs upon awakening: some to be doctors and teachers, others to be engineers or laborers. Porter, our narrator, was being trained to be the colony’s psychologist, but with his early awakening his knowledge only goes up to the 20th century (how convenient for Howey).  Their cut-short training also affects others, such as Oliver, who was being trained to be a philosopher. Oddly enough, by not receiving his full training Oliver becomes a religious zealot…I guess his training skipped over the great Greek philosophers?

Whatever. This is a young adult novel, admittedly, so I suppose some short-cuts in characterization and world-building are to be expected. But I’m not an adult who actively seeks out a lot of YA fiction, because I prefer fully fleshed out characters and drama that isn’t oversimplified the way things are in Half Way Home. After a strong opening third, the middle section of the book – after Porter and some of his friends escape the colony camp – just becomes a tedious adventure romp in a world which seems to have little development beyond giant trees that drop “bombfruit” and large caterpillar-type creatures which can be used for food as well as labor. We see no mention of other life on the planet beyond moss and grass until the very end, a passing mention of insects (which could have provided nutrition when they needed it) and a large creature that serves as a disappointing and ridiculous deus ex machina to resolve the conflict. Half Way Home shows little of the strong world building of the Silo Saga or even Sand, which I did not like as much but at least went into more detail of how people lived and survived in a strange world. Half Way Home is soft science fiction that’s almost taken to the point of being squishy.

There are some other issues with the plotting and characterization which struck a poor note with me. It seems that swearing and cursing has been a large part of these colonists’ education as the characters are constantly dropping f-bombs and other 4-letter words. They are all also quick to want to form instant romantic relationships, pairing off every available boy with a girl and while we don’t see any sex on the written page, it’s clear that it’s going on between some of them or implied to begin soon. By the end the narrator is talking about now 16-year old girls being ready to give birth…while it might be “practical” given their need to grow the colony and lack of birth control, if reading about the sexual desires and activities of underage kids is not for you, you probably won’t like this book (and it might not be one you’d want your own impressionable young child to be reading, either.)

There is also the point of Porter’s sexuality, which is handled in a very heavy-handed way. You see, Porter has no sexual feelings for any of the girls, not even Tarsi, who has clung to him since their “birth”. He does however have feelings for his friend Kelvin which he can’t quite put into words. He also feels different from the other boys in his strength and interests in a very stereotypically “gay” way…although he never uses that word and seems to not know what that means until the end of the book, despite his so-called psychological training. Howey takes a stance on being “born that way” and on reinforcing ideas of homosexuality that I found off-putting, even as he claims in the author’s notes and acknowledgements that the character is supposed to be a tribute to a relative of his who suffered ostracism for his sexuality. While the sentiment is admirable, the execution left a lot to be desired from my point of view.

There is also the issue of the “abortion” symbolism which comes across in a very pro-life way by the end of the book. See, we get a lecture at the end about how colonies on the edge of success should be given a chance at life instead of automatic abortion by the A.I., to survive or perish on their own. Because the A.I. attempted to “abort” them and now the survivors are settling in and beginning to thrive. Are we getting the anti-abortion message here, fellow readers? I certainly did, and it made me quite uncomfortable and left a bad taste in my mouth.

Howey admits in the acknowledgements that the book was written for National Novel Writers Month (NaNoWriMo), which may explain how so many ideas were rushed and not fully developed. While NaNoWriMo is not an awful thing in its own, he should have perhaps remembered that it is only for finishing a draft of a novel, not a final work. Half Way Home feels like it needed more time for rewriting and revision, and the guiding hand of an editor instead of a rush to self-publication.

All in all, Half Way Home was not the book for me. I can only give it ** (2 out of 5 stars) for the strong start and interesting premise, but it was a struggle for me to finish this book and the ending didn’t prove all that worth it for me. At this point I’m not sure how I feel about Howey as an author; as much as I loved the Silo books, the two others I’ve read since then, Sand and Half Way Home, have really disappointed me. I think it’s time to take a break from his books and explore some other authors for a time.