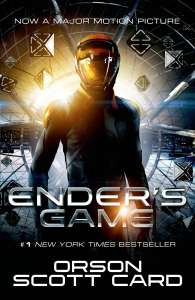 The film adaption of Ender’s Game has been highly speculated about and anticipated for decades by science fiction fans. The book, first published in 1985, is today considered an absolute classic of the genre and won both the Hugo and Nebula Awards for best novel. It has also lead to numerous sequel and prequel works further exploring the universe and characters first brought to life in this story.

However, it has been a long road to cinema screens for Ender’s Game, and also a controversial one. Many called to “boycott” the movie due to author Orson Scott Card‘s strong opposition to gay marriage and LGBT rights. The author, once beloved and embraced by many “geeks” and outsides because of his characters such as Ender Wiggin, has turned off many of those fans in recent years due to his conservative religious and political beliefs.

So it was with some mixed feelings that I went to see the movie, but honestly I loved Ender’s Game far too much as a story to let the controversy stop me from seeing the film. It has been about twenty years since I read the book and felt it would be best to see the movie first, with fresh eyes, before re-reading the novel—which I now want to do as soon as possible. While the film was not perfect, I thought it did a commendable job of getting to the heart of the story and the ethical and moral questions it raises.

Ender’s Game is set in a future Earth which has just barely survived an alien invasion by the insect-like Formics, or “buggers” as they are often referred to. It has been fifty years since that last war and Earth’s military forces has been busy preparing for an expected return invasion. Recognizing that children learn faster and have the capacity to be trained more quickly at an early age, the best and brightest are enrolled in “Battle School” where they compete against each other in computer games, and then zero-gravity staged battles, to determine who is the best and who will lead the International Fleet.

Andrew Ender Wiggin is a “third” child, whose birth required special permission in the overpopulated future. He is extremely gifted and battles to control his emotional side: urges toward violence that made his brother Peter unfit for battle, and a tendency toward too much compassion that also ruled out his sister Valentine. Ender’s Game follows his progress through Battle School and in to Command School, where he then faces increasingly complex and realistic “simulations” of war against the Formics. Along the way he must struggle with bullying and torment by the other young students as well as mind games and cruel treatment by the commanding officers, who believe anything is acceptable in turning these children into killing machines to take on the Formics.

The film version of Ender’s Game necessarily condenses much of the complex storyline of the original book, particularly that of Peter and Valentine and the important roles they play in Ender’s evolution—and the political world of the future as a whole. I wish at least a little more time had been devoted to setting up the backstory of this future Earth and the extent of the devastation caused by the attempted colonization by the Formics; as it is most of this is run-through quickly in awkward “info-dump” narration and dialog early on.

That said, the visual effects were beautifully done and felt “right” to me and my memories of the book, especially the Battle Room (which I also wish we saw more of) where the young cadets stage their zero-gravity “games”. Asa Butterfield was terrific as Ender and it was amusing to see him working once again with Ben Kingsley, with whom he co-starred in Hugo. (My only issue was I thought he looked eerily like a young Sheldon Cooper…a character comparison that perhaps is not that odd after all.) 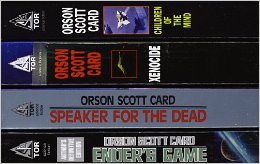 The Ender Quartet Box Set: Ender’s Game, Speaker for the Dead, Xenocide, Children of the Mind – Box set of paperbacks available on Amazon.

The other young actors were fine in their roles, although few were given much time to develop their characters in any depth. Harrison Ford was surprisingly good as Colonel Graff. It’s been a while since I thought Ford has done anything but go through the motions in a role, and here he managed to elevate what could have been a stereotypical gruff military character into something much more.

Overall, I was glad I saw the film—and on a big IMAX screen to really appreciate the effects and battle scenes. I would recommend it to anyone who enjoys science fiction that’s not just all big explosions and aliens but also makes you think and question morals, ethics and human nature. I’m looking forward to re-reading the book now as well as the next in the series, Speaker for the Dead, which was always my favorite “chapter” in Ender’s story. I might even give Xenocide and Children of the Mind another try; I remember finding it difficult to get into either of them when I first tried reading the books years ago, but perhaps I will get more out of them at this time in my life.

For more on Ender’s Game and related works of fiction