The 2015 Dragon*Con Convention in Atlanta, Georgia

Dragon*Con is a media fandom convention held annually over the Labor Day weekend in downtown Atlanta, Georgia. Dragon*Con is the largest such event on the East Coast, celebrating science fiction, fantasy, anime, comics, gaming, music, film and all things genre-oriented. Every year, tens of thousands of media fans come to Atlanta to revel in the 4-day experience of Dragon*Con and enjoy spending time with like-minded fans, friends – and get some celebrity autographs and photo opportunities while they’re at it.

For a new attendee, Dragon*Con can easily be an overwhelming experience. The crowds, the multiple tracks of programming, the countless ways to spend money on cool collectibles, artwork and costuming… Knowing how to prepare for the event is as important as knowing how to best utilize your time – and funds – while there.

Dragon*Con 2015 is scheduled for September 4 – September 7, 2015. This page is my survival guide to making the most of Dragon*Con, based on my numerous years of experience as both an attendee and a vendor in the Dragon*Con Dealers’ Hall. 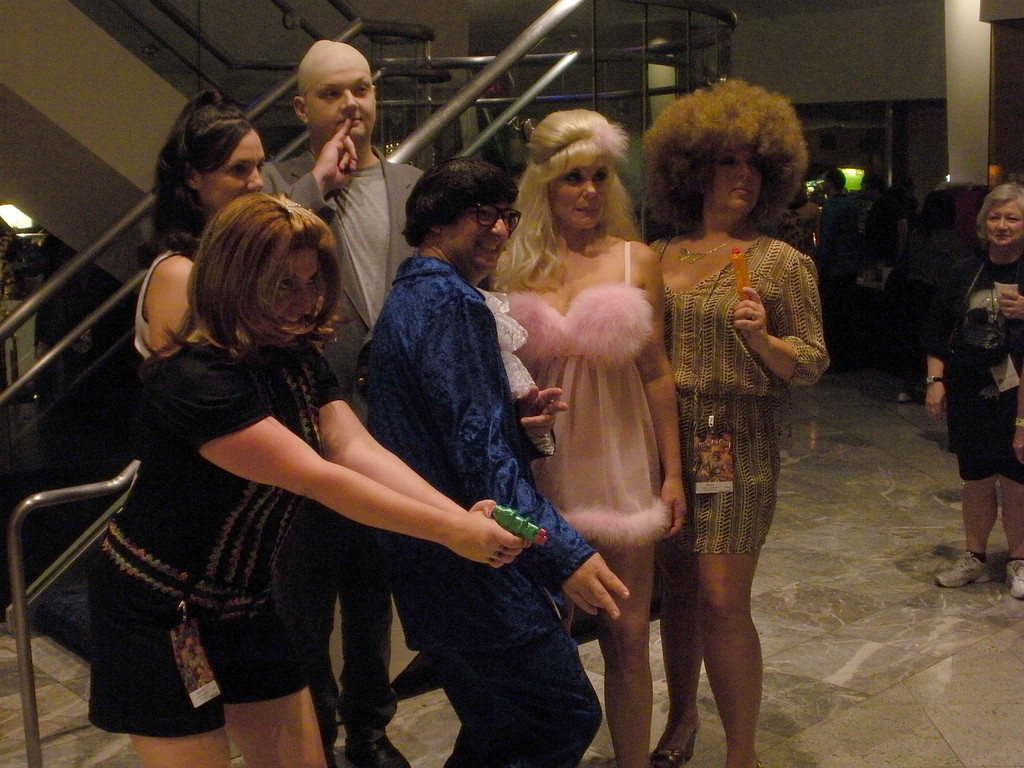 Things to Do at Dragon*Con in Atlanta 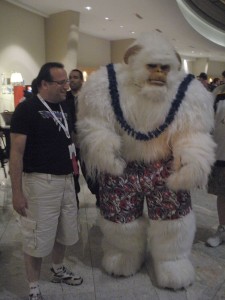 Dragon*Con is a 4-day, 24 hour a day experience. Every moment of the day and night, from the Friday through the Monday of Labor Day weekend, is packed full of activities, events, concerts and discussions. At Dragon*Con, you can:

* Hear celebrity guests speak, get their autographs and pose for photos with them

…and perhaps most interesting of all, people-watch! From the annual Dragon*Con parade through downtown Atlanta to the late-night “hotel crawls”, people dress up in the most elaborate, creature and sometimes hilarious costumes at Dragon*Con.

In fact there’s so much going on at Dragon*Con, it’s important to plan ahead and be prepared for how to deal with the crowds, the schedules, and how easy it is to spend a lot of money. You should check out my 10 Tips for Surviving Dragon*Con for helpful ideas on making the most of your convention experience. 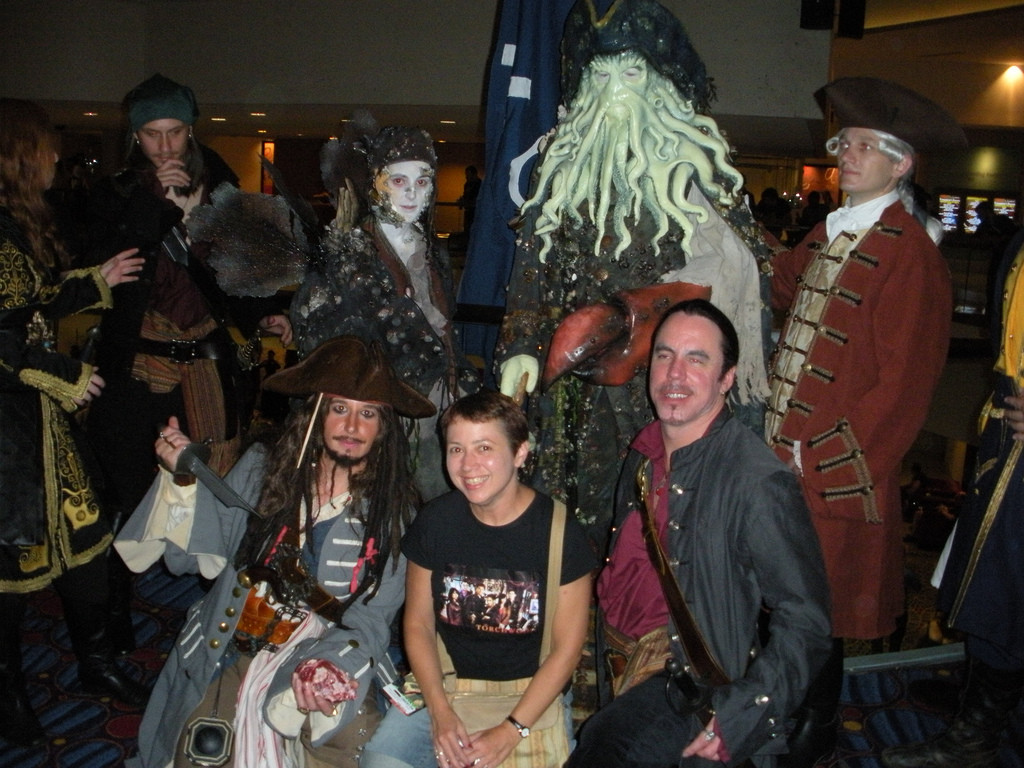 You never know who you’ll run into at Dragon*Con…

Planning Where to Stay During Dragon*Con 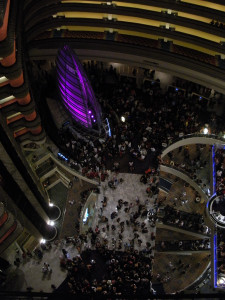 The Marriott Marquis where much of the action at Dragon*Con takes place.

Which is the best hotel to stay in for Dragon*Con? The answer will vary depending on who you ask and how you plan on spending the convention – and where you are able to actually get a room!

3. The Marriott Marquis Downtown Atlanta Hotel (265 Peachtree Center Ave – considered by many THE best hotel for Dragon*Con and best place to stay, if possible, as it is the heart of most partying and late night people-watching)

At this point, all con rate rooms in these hotels are likely officially sold out, but it’s always worth checking back closer to the convention as people cancel or combine room reservations.

You can visit the Dragon*Con hotel page for discount codes at the host hotels and also overflow hotel information. Personally, I usually look for a room via Priceline at one of the overflow hotels in the downtown Atlanta area, or for an inexpensive room in the midtown area instead. Being a little away from the main convention action can actually be nice for a change and a bit of relaxation, and most hotels in midtown are not far from the convention and located just a few stops away on MARTA.

Celebrity Signings and Guests at this year’s Dragon*Con

Who will be the top celebrity draw for the 2015 DragonCon? The featured guest list for 2015 is just starting to come together, and some of the notable names already there include:

Of course, it is important to know that convention guests are not guaranteed; schedule conflicts, personal matters and travel difficulties can keep a guest from attending at the last minute. Therefore I generally do not recommend a person plan on attending Dragon*Con and traveling long distance to the convention if he is solely interested in seeing just one guest, in case that person cannot make it.

How do autographs and celebrity photographs work at Dragon*Con? 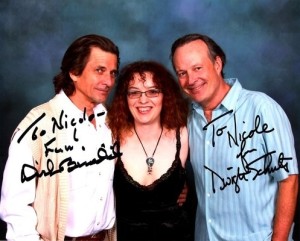 The author with Dirk Benedict and Dwight Schultz of The A-Team, at Dragon*Con.

Autographs are NOT included in your Dragon*Con membership. You must pay individually for the autographs you want, and can typically either buy photos from the stars themselves or bring your own items to sign. Autograph prices can run anywhere from $20 to over $100 and cash is typically required. Signings are held at the “Walk of Fame” exhibit hall at Dragon*Con. The Dragon*Con pocket program will give you a schedule of when each guest is scheduled to be signing, generally around the times they are giving a presentation or panel appearance (right before or after) for often a few hours a day.

Some guests will allow you to take a snapshot with them, at their table, for a fee of $5 to $10 – so please don’t start taking photos without checking their policy first, and DO NOT take random photos of the celebrities if you happen to pass one by in one of the hotels’ hallways or restaurants. Professionally staged photographs with some of the guests are available and arranged by “Froggy’s Photos”. They are not cheap – think $25-50 on average with more for larger group shots or big name guests – but you will get a nice 8″x10″ photograph with your favorite celebrity for the price. The photo above of myself with The A-Team‘s Dirk Benedict and Dwight Schultz is an example of one of these staged photo sessions at Dragon*Con, which I then got signed by each. 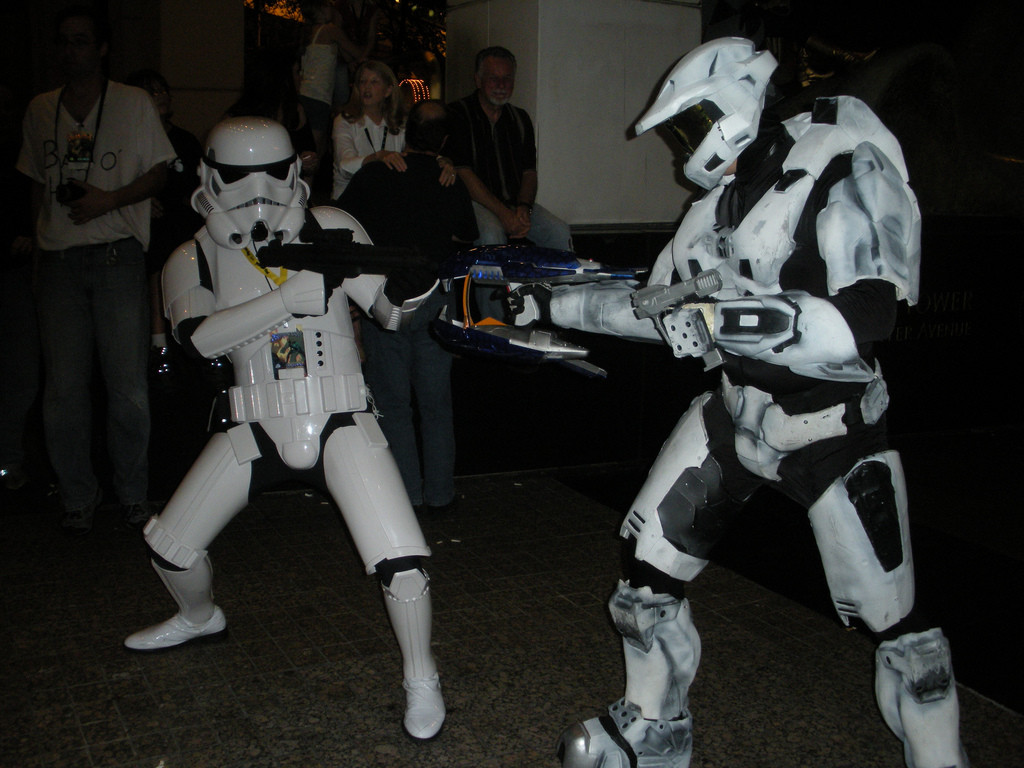 Ten Things You Must Pack for Dragon*Con

Whether you’re attending Dragon*Con for the first time, or are a regular attendee, here are things you definitely will want to remember to pack for the convention.

An Important Caution to all Attendees 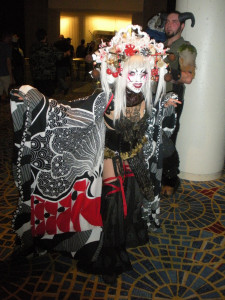 Dragon*Con takes place over several hotels and pours out into the open streets of Atlanta, Georgia. As such, it is not a “closed” convention space, and many non-attendees from the nearby area – or those in Atlanta for other events – often end up intermingling with convention attendees and not understanding the costuming and other aspects of Dragon*Con completely. This can lead to unfortunate situations at times, and indeed the 2010 Dragon*Con ended up being the site of numerous disturbing incidents of sexual harassment and assault. Much of the harassment allegedly was directed at convention attendees by college sports fans who were also staying in the downtown Atlanta area, or those being encouraged on Facebook or Twitter to come gawk at “the freaks”.

As such, it is important for all convention attendees to be aware of their surroundings at all times and how to protect their personal safety. Attendees need to look out for others who might be in danger or being harassed. While we hope hotel and convention security will be better this year at taking charge of these harassment problems, there is now a volunteer project, Back Up, to encourage convention goers to look out for each other’s safety. Visit the Back Up LiveJournal community for more information on the project and how you can get involved. 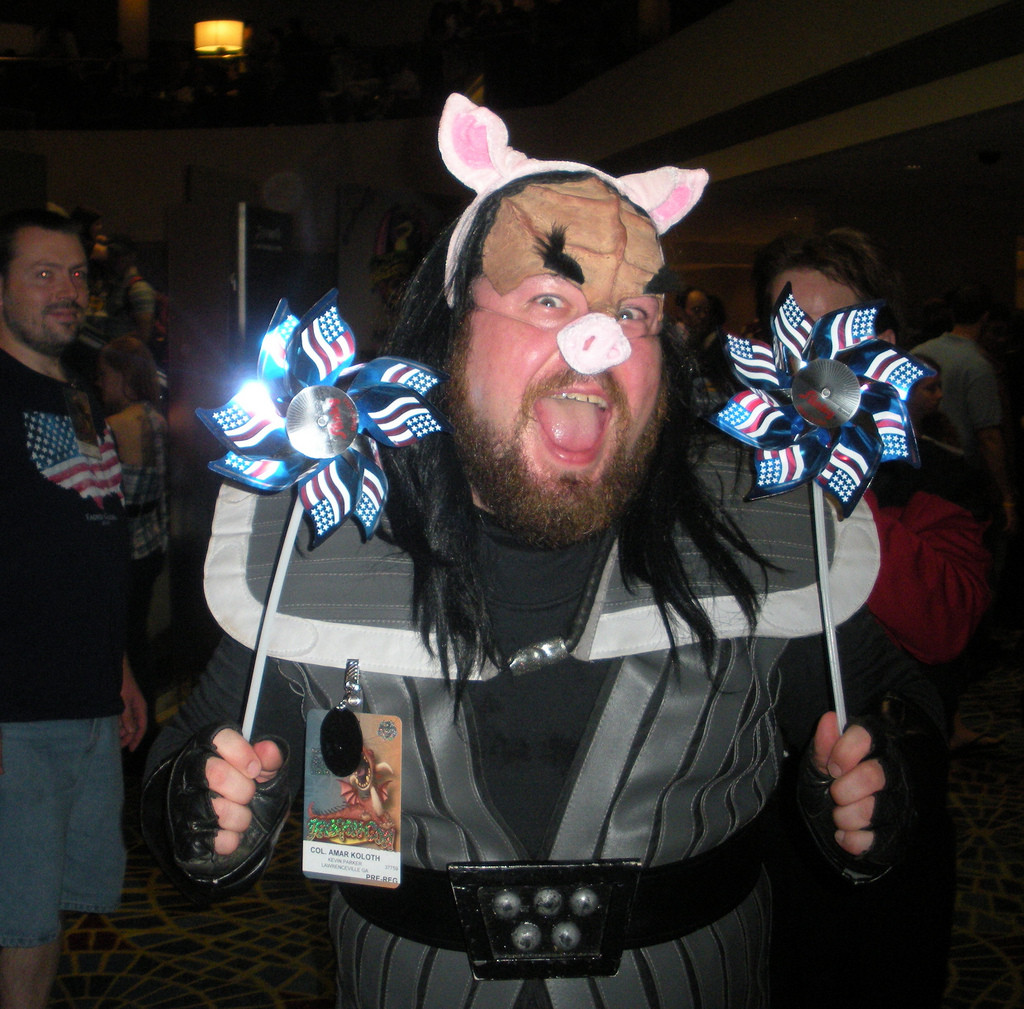 How Safe is Atlanta, Georgia for Dragon*Con

About Downtown Atlanta and Personal Safety

Some people wonder how safe is Atlanta, particularly the downtown area where Dragon*Con takes place? I personally have never had any issues with safety there, although one must exercise the same amount of common sense and awareness necessary in any large, urban city. There are certainly a number of con artists and homeless hustlers hanging around in the dowtown area during the convention, looking for people wearing badges or in costume who may not look like they know where they are going. Downtown Atlanta itself is a bustling commercial and business area during the day, but after work hours does tend to get deserted – except of course for all of the Dragon*Con attendees during the convention.

Some general words of advice: if someone on the street approaches you and asks if you need help with your luggage, or loading your car, or finding a particular hotel, politely decline them. There are many police officers and tourism guides around on the street who can provide genuine assistance. You can also walk in to one of the area’s many hotels and ask at the front desk or concierge for help. If walking the streets late at night, do not walk alone – travel in a group or take a taxi, even if it’s a short trip. Keep expensive belongings to a minimum as you are walking around – leave valuables and additional credit cards/cash/etc in a safe deposit box in your hotel. 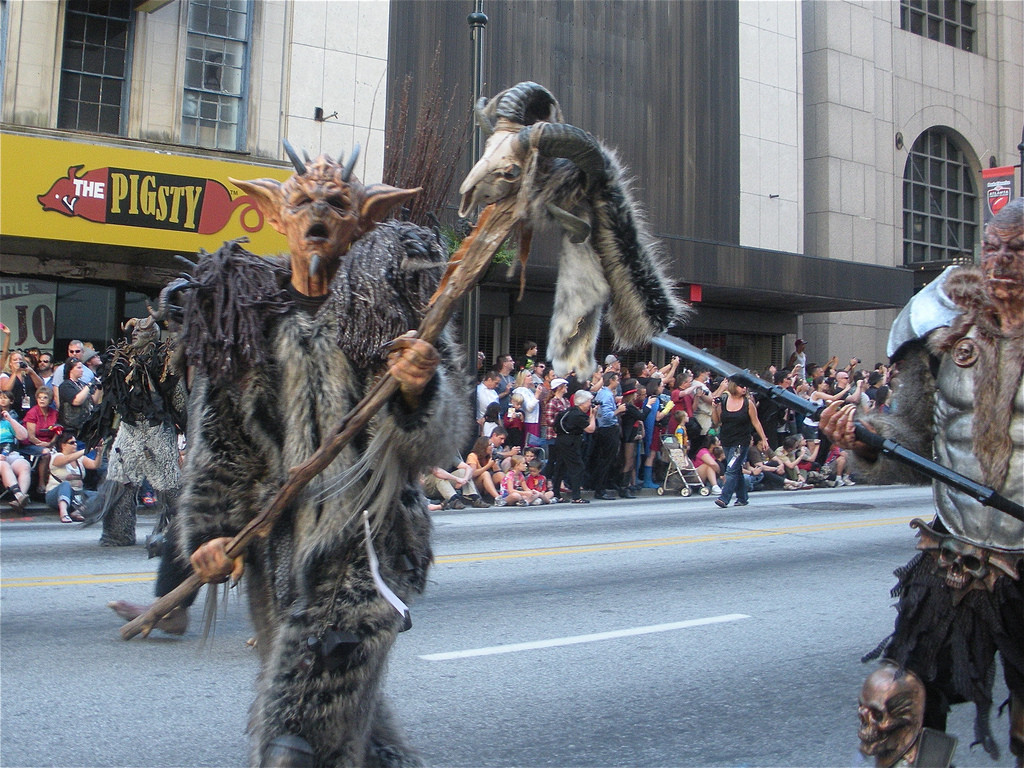 Dining Out During Dragon*Con

Nearby Restaurant Options in Downtown, Atlanta 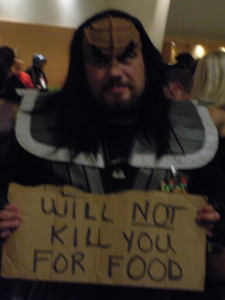 Downtown Atlanta offers many dining options, although a large number of them are national chains. However there are a few more local options worth checking out along with the better chain restaurants. The ones listed below are all restaurants I’ve been to during Dragon*Con and recommend. Keep in mind, however, that reservations may be strongly recommended if possible because of the huge crowds in the area during the convention. If you have more time, you may wish to take a quick hop on MARTA to nearby Midtown or Little Five Points, which offer more interesting and trendy options.

The Mall at the Peachtree Center also features a large food court, where many Dragon*Con attendees regularly get their meals. Options include sandwiches, Mexican, pizza, hot entrees, wraps, Japanese buffet, coffee, Asian food, and much more. It’s best to go slightly off the main lunch hour to avoid long lines and massive crowds. 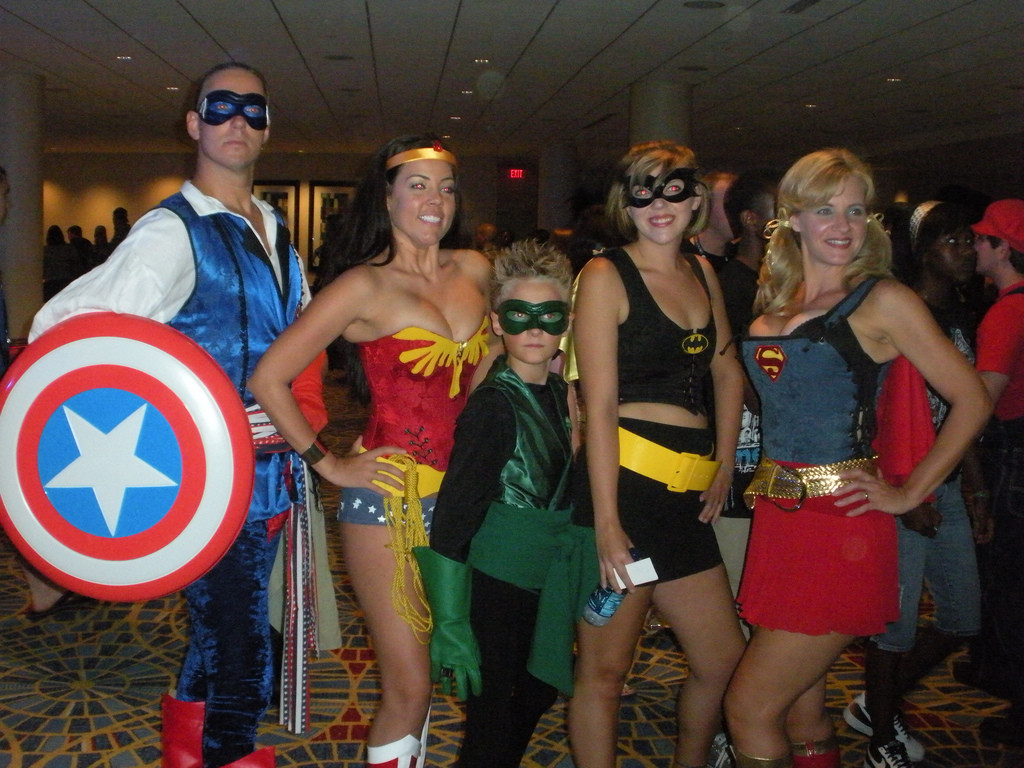 My Photo Galleries from Past Dragon*Cons

For more pictures of costumes, parades and general fun at Dragon*Con, check out my photogalleries on Flickr:

On Being a Dealer at Dragon*Con

Spending my Dragon*Con Days in the Dealers Hall 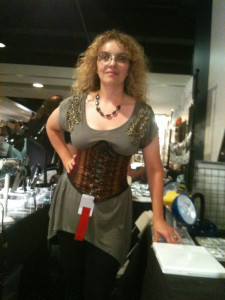 I have always attended Dragon*Con as a vendor, selling my jewelry and artwork in the main Dealers Hall. Some ask me if I really get to enjoy the convention by doing so. Absolutely! As I always have at least one helper with me, we are able to trade off time to go to panels and other evening like the Dragon*Con parade we wish to see. Our dealers hours end in the early evening, so we have plenty of time to enjoy evening events, go costume-watching, and generally explore the convention. It can even be nice to have a little “safety zone” behind my dealers table, to escape the throngs of people everywhere. Most of the time I have a lot of fun interacting with customers and seeing people leave happy with one of my handmade jewelry designs or original works of art.

Of course, every once in a while there are annoying and frustrating things that happen as a vendor at Dragon*Con, and elsewhere. With large crowds can come a lot of people clueless about how to treat handmade items with care – or who don’t understand that yes, us vendors are there to make money, not have our table or booth turn into a social gathering point! I’d like to point people toward my article “Etiquette for Shopping at and Browsing Craft Fairs and Dealers’ Halls”, all about how to make the shopping experience better for both shoppers and for sellers.

See you at the next Dragon*Con…? 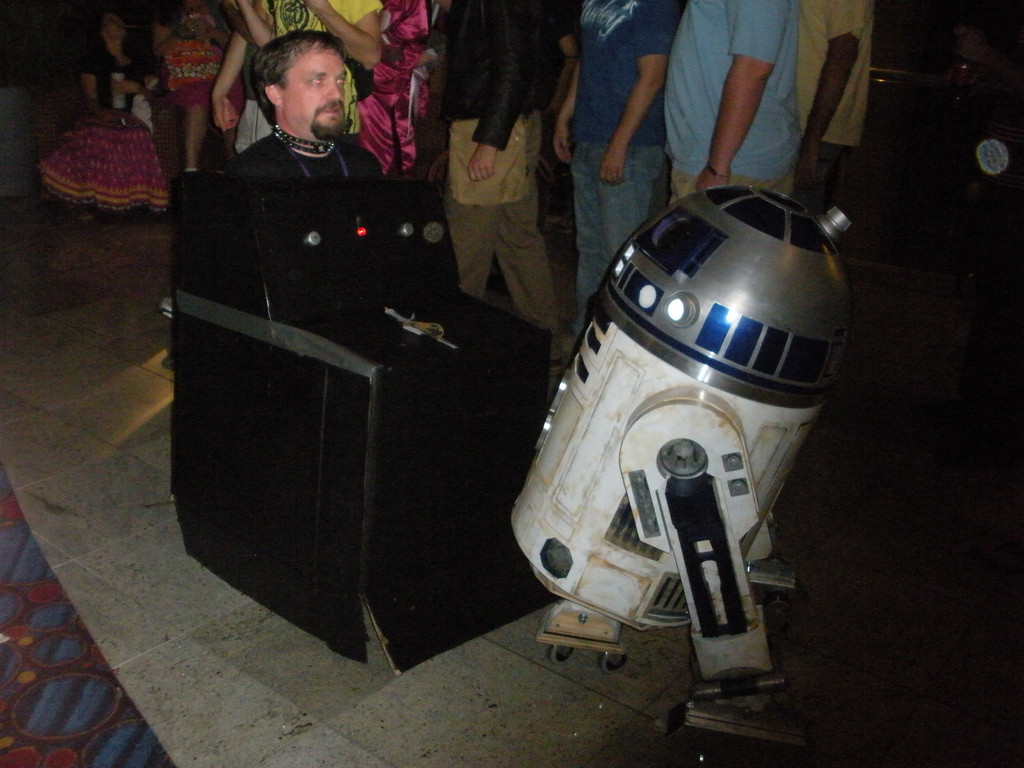