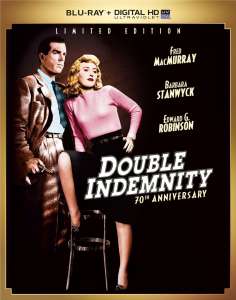 Double Indemnity is one of the classic film noirs from the 1940s, a genre that was popular in that era. The movie received positive reviews and is credited with setting a standard for future films that followed a similar plot. It’s hard to believe, but this film is marking its 70th anniversary this year.  In tribute to the occasion, a special edition Blu Ray DVD has been released. Fred MacMurray had previously been cast in light roles and played nice, easy going characters.  For this role he was definitely going outside his comfort zone. The same could be said of Stanwyck, who was used to being the heroine. They would both be playing two very unlikeable  and immoral characters.  Fred and Barbara  were concerned this could have an adverse affect on their careers. Other prominent actors from that era had been offered the leading roles  and had declined. However, their fears turned out to be unfounded.   The  movie was a  big success.   As  unsavory and evil as these characters were, they ended up paying dearly for what they did.   This was always the case with 40s film noirs.  No one got away with their crimes. Walter was a very weak man.   He quickly succumbed to Phyllis and became a willing participant in a murder scheme.   All he can think about is being with Phyllis, so he will do whatever it takes to make that happen. Phyllis was a scheming manipulator, and Walter was very easy prey. Although he eventually feels guilt and remorse for what he did,  he didn’t turn himself in, but tried to frame someone else.  As a result, it was hard to feel any sympathy for him. The story is told largely in flashback. It opens with Walter making his confession.  Even so,  he manages to largely blame Phyllis for what happened. She may have been the instigator, but he was willing to go along with the plot.   He helped carry it out, which made Walter just as guilty. Double Indemnity was considered to be a daring movie for its time. It broke new ground in exploring the plans and reasons why someone would commit such a terrible crime. It also features great acting by MacMurray and Stanwyck, who were both very believable in roles they did not usually play. Over the years, critics have continued to praise the film, and it is considered now to be one of Stanwyck’s best roles. Image is in the Public Domain at Wikimedia Commons