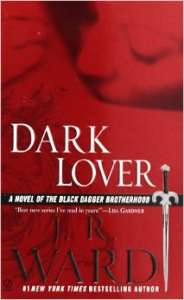 The cover of Dark Lover by J. R. Ward. Buy this at Amazon.

We all know that paranormal romance is hot these days, particularly when vampires are involved. Just look at the success of the Twilight series, True Blood and the Sookie Stackhouse novels, or any other popular book series out there.

One such incredibly popular current series is the Black Dagger Brotherhood novels by J.R. Ward. Currently there are 11 books published in the series, with the 12th due in 2014. I’ve had the first 6 books in the series sitting around on my bookshelf for some time; I picked them up for cheap used from someone who was very enthusiastic about the series as a whole—she was only selling the paperbacks because she now had them all on her ereader. While I’m not an avid reader of heterosexual romance novels, I was intrigued because a) I generally like good vampire stories, and b) she praised the world-building and relationships between the various characters, the vampires of the “Brotherhood” each of whom is focused upon in a different novel.

So, I finally got around to reading the first book while on a recent vacation trip. It made for decent-enough distraction on a 10-hour plane ride, but I can’t say I was nearly as enamored with the story as so many others obviously are. While there was some interesting world-building in J.R. Ward’s take on the vampire myth, the book was plagued by cheesy dialog and laughable descriptions, an over-abundance of awkward product placements, and most annoyingly to me so much abuse of sentence fragments as to make the book often painful to read.

But let’s start with the basic premise of the book. The “Black Dagger Brotherhood” itself is a group of “super”-vampires, who work together in secret to protect their race from those who would see all vampires destroyed. In this universe, vampires are not made but born, although their vampyric nature does not reveal itself until typically a vampire reaches his 20s. The members of the Brotherhood are all super-strong, super-built, muscled brawny types who like to dress in black leather and wear sh!tkicker boots (as they are oh so frequently described.) They listen to gangster rap and spend their time hooking up with human females when not fighting slayers. Basically I kept picturing pro-wrestling types from the author’s descriptions. The leader of the BDB is Wrath, who is nearly blind yet uses all of his other enhanced senses to be a fierce warrior. One day Darius, another brother-in-arms, prepares to ask Wrath to take care of his half-human daughter (who does not know her heritage nor her father) as she is nearing her transition. But Darius is killed by the slayers and the Brotherhood bands together to not just find out who is responsible for his death, but to deal with the question of Darius’ daughter.

That daughter is Beth Randall, a journalist in imaginary Caldwell, New York. Raised an orphan, she has no idea of her half-vampiric bloodline. She seems stuck in a small-town rut, reporting on petty crimes and drug busts but sees her life pretty much leading to a dead end: she has no boyfriend (nor any real desire for one, despite every man in the city apparently being in love with her), lives with her cat, and spends most nights eating Chinese take-out alone. Everything changes, though, when one night she is nearly raped by a pair of thugs and the violence between the BDB and The Lessers (their nemeses) starts heating up.

So we’ve got a lot of classic elements of a paranormal romance lined up: cross-species dynamics, an outside threat, discovery of secret identities/heritage, and a couple that seem to come from completely different worlds yet immediately feel an attraction between them. But that’s part of the problem, right there: Beth and Wrath’s attraction just comes on completely out of nowhere. Here she’s just been nearly raped, is terrorized that night by a vision of Wrath in her bedroom…and the next night she can’t wait to jump his bones even though she has no idea who he is, and how he’s in her apartment?! J.R. Ward doesn’t seem to understand how to make characters believably fall in lust, let alone love; a similar instantaneous-attraction later happens between Beth’s cop friend Butch and the vampire Marissa—once the promised mate of Wrath but he never loved her the way he instantly falls in love with Beth. So unless you can buy into Beth and Wrath’s instantaneous love-of-all-the-ages, it can be hard to really get into their relationship.

Let’s see, what other issues did I have with this book? Let’s start with all the tedious, boring sections devoted to The Lessers, in particular Mr. X and his “training” of new recruits. Not only was it not particularly interesting,  the villains not worth reading about, but there were creepy hints of Mr. X being gay/possibly even creeping on young boys that rang all of my “evil gays” cliche sirens. Honestly you could basically skip almost every chapter focused on the Lessers and not miss a thing.

Then there is of course the ridiculous names of the Brotherhood Members: Rhage. Zsadist. Vishous. Phury. Rehvenge. Tohrment. I’m not sure what J.R. Ward’s love of h’s is all about, but it doesn’t make the characters sound more sexy. It only makes them sound like they’re trying too hard (or she is, as author).

But yes, those painfully bad descriptions of characters—sometimes with the terrible abuse of sentence fragments as well. A prostitute is described as “shaking her ass like it was a can of paint”. Or worse, in another scene:

“Jose loosened his hold, and Butch went down like a piano. Just as half the freaking precinct came up in a rush.”

What does that even mean?!

Seriously, Ward uses sentence fragments so much for “effect” that they lose any effect whatsoever beyond becoming really grating.

“She defied him with total calmness and strength of purpose. As if he were no more an obstacle in her path than a throw rug.”

How does crap prose like this even get published? Is there not an editor at Signet, or is quality of writing and grammar so low a priority in the romance field?

At one point she observes to herself, about herself, “why couldn’t she have been named Mary. Or Sue.” Well. Trust me, to this reader she most certainly should have been. 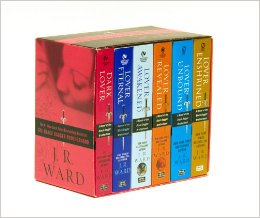 Boxed set of the first 6 Black Dagger Brotherhood novels. Buy this at Amazon.

But you know, here’s the really scary thing. Despite all the flaws, for some reason (besides being trapped on a plane) I ended up devouring this book pretty quickly, and I’m going to give at least the next book or two in the series a try. Why? Because despite it all there were some things I enjoyed about Dark Lover, even in a so-bad-it’s-almost-good kind of way. First, it’s kind of hilarious reading about these uber-macho vampires fussing over their black silk underwear, eating fancy meals prepared by their butler/servant (yes, these vampires eat human food, drink “Grey Goose”, along with blood), and obviously being such goofy babies over the women in their lives. And there actually is some interesting world building to the way the author has set up her vampires, and vampire/human dynamics, which I’d like to see further explored. I also really want to read more about Butch and Vishous, which seemed laced with slashy homoeroticism here, and get to the book Lover at Last which focuses on a gay vampire couple.

Would I recommend “Dark Lover” to others? Well, I guess it depends on your reading interests and your tolerance for cheesy/bad writing. If the storyline sounds like the kind of escapist romance fiction you enjoy, have at it, you might like it as much as the series’ many fans obviously do.