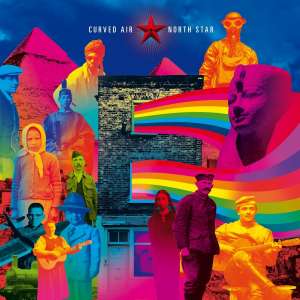 Curved Air’s 2014 release “North Star”. Get it now at Amazon.com

Fans of progressive rock have great reason to rejoice; Curved Air’s 2014 album North Star is not only the band’s first album of new material since 1976 but it’s an outstanding collection of music. Featuring seven new pieces along with seven captivating covers and re-recordings of older songs, North Star proves that “prog” is far from dead and can still be vital and engaging today.

For those unfamiliar with the band, Curved Air was first formed in London in 1970 where they became a true pioneer of the progressive movement. They were one of the first rock bands to combine talented musicians from all varieties of backgrounds: classical, folk, electronic and of course rock and roll. They were also one of the first rock bands to incorporate the violin into their music as well, with the masterful talents of Darryl Way. Fronted by Sonja Kristina, a powerful singer with an incredible stage presence, the band developed its following largely in the United Kingdom and Europe. Indeed, many progressive rock fans in the United States are not as familiar with their music and recordings which is a true shame. (I confess I only first heard of them and then listened to their recordings after learning that Stewart Copeland, drummer with my favorite band The Police, had been a member of Curved Air for several years and appeared on their albums Midnight Wire and Airborne.)

The band has gone through many personnel changes through the years, disbanding in 1976 and only rarely reforming: once for a single concert in 1990 and occasionally for appearances on each other’s solo recordings. They began touring and performing again seriously in 2008, going through more personnel shifts and changes until recording North Star with the band consisting of Sonja on vocals, original drummer Florian Pilkington-Miksa, Kirby Gregory on guitar, Paul Sax on violin, Chris Harris on bass and Robert Norton on keyboards.

In the video below, you can hear Curved Air perform “Situations” in April of 2013 — one of their classic songs which was re-recorded for North Star:

North Star opens on an urgent note, with the powerful rocker “Stay Human”. Guitar and violin trade riffs and Sonja sounds as fabulous as ever on this great track that sets the mood for what is to follow.  “Time Games” features all the complexity of classic 70s rock that you could ask for, with soaring vocals, a driving beat and terrific instrumental interplay. It finishes with an atmospheric, groovy interlude that reminded me of some of Pink Floyd’s great “space jams” from their ’69-71 years.

Next is a gorgeous re-recording of “Puppets”, a song which originally appeared on Curved Air’s Second Album. I definitely prefer this version, with its beautifully layered vocals and delicate instrumentation. (Think “Entangled” from Genesis’ Trick of the Tail.) Four more new songs follow. The first two, “Images and Signs” and  “Interplay”, both have that absolute classic Curved Air feeling to them while still managing to make progressive rock sound fresh and relevant today. “Spider” is a quick-tempo instrumental that showcases the band members’ virtuosity, but the most interesting track to me of this group is “Magnetism” with its spoken-sung hypnotic verses and groovy rhythm. It has an experimental and modern sound to it that actually reminds me a touch of the eclectic/avant-guard blues-rock Kristina’s son Jordan has been performing in recent years with his band Hot Head Show.

The second half of the album is dominated by the covers and several more re-recordings. First is the lushly arranged “Colder Than A Rose In Snow”, a ballad which Sonja recorded in a much more folk-styled version on her 1980 solo album. Both versions are beautiful, so it is difficult for me to pick a favorite of the two. Next is the most interesting of the cover tracks on the album, at least from my perspective as a Police fan: “Spirits in the Material World”. I just absolutely adore the jazzy, slowed-down spin Curved Air puts on this song here—which truthfully was never one of my favorites from Ghost in the Machine back in the day. The song really benefits from this reinterpretation, in my opinion.

“Old Town News” is one more new track, which has a fun honky-tonk feeling to it; something I could imagine hearing on say a classic Elton John album from the mid-70s. “Situations” is one of my all-time favorite Curved Air songs, from their debut 1970 album Air Conditioning. The arrangement here is quite similar to the original (albeit more updated for today’s sound and technology), but it is most interesting to hear Sonja sing it today, over 40 years later. Another very interesting cover of another band’s work follows with their version of Snow Patrol’s “Chasing Cars”. It’s a gorgeous, minimalist arrangement which showcases Sonja’s vocals just perfectly.

“Young Mother” from Second Album is another re-recording fairly faithful to the original, a great prog classic—if you love Genesis from around the Foxtrot/Nursery Cryme era you should really enjoy this song. The last track on North Star is perhaps the only cover/rerecording that doesn’t quite work for me. It’s a version of The Beatles “Across the Universe” which is so ethereal, it almost just floats away into nothingness…but perhaps, in the end, that is message after all?

Overall, this is a really enjoyable, mature, complex collection of music that rewards repeated listens. It’s the kind of thoughtful rock that’s so hard to find, that so few bands are producing these days. I thoroughly recommend it to any fans of classic 70s progressive rock, or anyone who is willing to give it a listen with an open mind and willingness to explore new sounds and experiences in music.