This essay was originally published June 2006 at FanHistory.com.

Almost from the start of modern fan fiction community history, the creators were aware of fan fiction. Early interactions can be traced back to 1966 when a young writer named Joy Hill sent a note to J.R.R. Tolkien asking if the writer can have permission to write stories using the names of characters from Lord of the Rings and write a sequel. J.R.R. Tolkien responded that he would forward the request on to his lawyers but, basically, it was not going to happen.[1] They also trace back to 1967, with a letter from Leonard Nimoy appearing in the fanzine, Spockanalia.

The quality of interactions and the influence of the creator on the fandom would be a mixed bag. In some cases, such as Star Trek and Blake’s 7, the tacit and often open support of actors and producers from the show helped to fuel the fandom. In other cases, such as with Anne Rice in the late 1990s, the interaction through the form of demands that fan fiction writers cease with their activities, has led to less than pleasant situations. 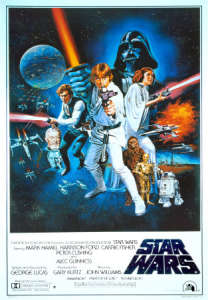 The case of the Star Wars fandom is a unique one. The community formed early, almost immediately after the first movie came out. It wasn’t but a few years later that Star Wars fans began interacting with the creators through the official fan club and legal letters. George Lucas and his company wished to have Star Wars associated with a family friendly image. The presence of adult material and stories featuring same sex pairings upset them. Action was taken by sending a letter and engaging in dialogue with zine publishers. This type of interaction led people away from the fandom because of the perception of oversight from the powers that be and some people into the fandom because of the lack of adult material, something they felt they were getting bombarded with from older fandoms like Star Trek. This attitude of hostility towards adult material and fan control over fan works led into the 1990s, with the official Star Wars site trying to lay copyright claim to all fan creations uploaded to their StarWars.Com fan site. The community also generally balked at adult and slash material. The major exception to this was the Masters and Apprentice list.

In 2001, the fan fiction community at large gained a greater understanding of various author policies regarding their fan fiction. This understanding was one of the first large scale discussion of the topic on a panfandom level. It would be important in terms of defining positions on personal levels for arguments about fan rights, author rights and the nature of the relationship between them. This discussion would also bring a greater awareness of the Marion Zimmer Bradley incident to people who had never heard of it before.

Profesional authors continued their interaction with fans and discussion of fan fiction in the new millienium. On April 7, 2002, Neil Gaiman discussed what fan fiction is in his on-line journal.

Copyright attitude holders, from the media side of the fan fiction community, have been changing their policies towards fan fiction since 2005, the last year that a cease and desist letter was sent for fan fiction.[2][3] Some companies like CBS[4] and LucasFilms Ltd.[5], which had been historically hostile to fan fiction, changed parts of their model in order to be more fan friendly. This included trying to encouraging fan works and integrating them into official sites. When not hosting the fan fiction or being openly tolerant of existing fan sites, companies created partnerships with other companies like FanLib[6] to aid them in the task. One of the most fan friendly companies in the post 2005 era was Blizzard Entertainment which housed fan art and fan vids on their site.[7]

According to a Wired article:

Today, creative types dream of making worlds that fans actually want to colonize; J.J. Abrams, George Lucas, and Whedon design their cosmogonies with this in mind, while the developers of Grand Theft Auto, Halo, and World of Warcraft take the participatory paradigm further every day. It’s hard to say whether Conan Doyle would be pleased. (He once bought a fanfic—for £10—to use as inspiration.) But they wouldn’t surprise him either. He was there at the beginning, after all. “Elementary,” he’d remark, or perhaps, for the groundlings: “No s–t, Sherlock.”[8]