Free jazz and avant-garde jazz are similar styles of music. Along with post bop, they have many things in common, you really can separate the styles into 3 distinct categories. Often times fans of either style will enjoy the other two. 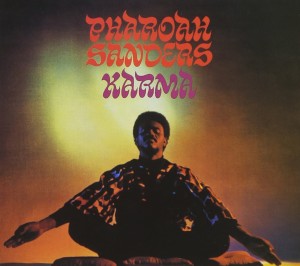 Free Jazz is indeed freer, and at times wilder, and even over the top with its expression of the freedom from jazz’s traditional forms. Many traditionalists will either roll their eyes at it, or offer terse opinions deriding the genre.

Avant-garde and post bop jazz are also freer than the jazz that came before it, but the lesser degree in which it is free is what marks the difference.

The pictured Pharoah Sanders Karma album is fantastic example of world music and free jazz coming together to offer a very accessible version of free jazz. You get a mix of time signatures, diverse instrumentation, and varied tempos.

I suppose the be-bop of Charlie Parker and Dizzy Gillespie in its own way was avant-garde free jazz to the neo cons of their day.

Below I have put together a pretty good list of 9 albums you might like to check out if you’re just getting into free jazz. Every collection should have these, and 3 albums are considers absolute stone classics of Modern Jazz.

This is not easy listening

I realize that you aren’t talking about a lot of people in the world percentage wise who enjoy free jazz, Modern jazz its self is pretty niche, and has a loyal almost cult following only these days.

Free jazz may have the staunchest followers of all. No apologies here, I enjoy the music from time to time, If you don’t, that’s OK too.

What does atonal mean in a jazz setting?

Basically it just means music without a key, or a tonal center. I think one of the real misconceptions about free jazz is that anyone could just bang away at an instrument and produce these sounds.

Sort of reminds me of the argument against abstract expressionism within the art world. The very same slights are directed at Jackson Pollock in particular.

It’s ironic how free jazz makes me focus on it much the same way Pollock’s action paintings force me to focus on them with deep contemplation.

John Coltrane’s Ascension is widely considered the most important Free Jazz of all Time, debatable for sure, but undeniably the album gave gravitas to the genre of free jazz when Trane came on board.

Ascension did tick of the traditionalists, but Trane was headed this way, as well loved as A Love Supreme was, it even dropped hints at this new searching direction Coltrane was going.

An 11 piece band that features many of the firebrands in the genre, Marion Brown, John Tchai, Pharoah Sanders, and Archie Shepp. Freddie Hubbard is also of note appearing on both Colman’s Free Jazz and Coltrane’s Ascension.

I like how you can check out the order of soloists and put a name to the sounds being made. I’ll admit it’s harder to know who’s doing what on an album like this.

On a typical bop recording I can hear Miles Davis’ trumpet or Dexter Gordon’s sax and say, “Hey, that’s Coltrane or Dex. On something like Ascension that’s not always easy, and really unless I was a huge fan of John Tchicai, would I be that familiar with the tone of his sax?

Well, that’s why I love this music modern jazz, had you told me I could identify a musician just by the tone or nuances of his playing I wouldn’t have believed it.

Machine Gun is the album that will separate the pretenders from the real avant-garde fans. No joke, I loved this album from the first time I heard it, it makes Coltrane’s Ascension seem tame.

That opening riff is just pure brutal reality, you might think it’s a joke, and I am sure many do, not for the traditionalists ears for sure.

If you have open ears you will no doubt be intrigued by the music, it does reach out and grab you, maybe it hits you over the head with a hammer is more to the point.

of my favorite jazz albums of all time, sort of psychedelic free jazz album. Pharoah Sanders does plenty of free form over blowing in spots, but the music is carefully crafted with a bass line reminiscent of A Love Supreme.

As free as the music can be at times, the thing that might be hard to get is Vocalist Leon Thomas’ Yodeling, and his exhortation of the Creator having a master plan.

No matter what, the album works well and should be given a chance by all open-minded music listeners.

Eric Dolphy: Out to Lunch

Many consider Out to Lunch to be the quintessential avant-garde jazz album. It would be hard to argue that point.

Dolphy was not everyone’s cup of tea, Miles Davis once remarked during a 1964 Downbeat Magazine blind fold test, that had to be Eric Dolphy, because nobody else could sound that bad.

That composition was “Mary Ann” from Far Cry of which Miles spoke. It is interesting how avant-garde Miles would end up getting, especially with the second great quintet and some of the wild funk fusion from the 72-73 period.

Out to lunch is special because of the well thought out compositions, “Hat and Beard”, Straight up and Down” stand out to me.

Tony Williams on drums is insane, this is before he joined Miles by the way, he was only 18 years old. Dolphy himself would be dead a few months after the recording sessions.

around this: Coltrane is so far advanced on the saxophone, it must make prospective players want to throw away the instrument.Rashied Ali is no slouch on drums, and normally I would miss the bass in a recording like this.

I swear you don’t even think about it, the music is so big and full of life. Again: Coltrane plays things that m ust have seemed impossible in 1967

Albert Ayler’s masterpiece Spiritual Unity is really not as FAR OUT as you might think. A fantastic trio album that opened up people minds in 1964.

Complete freedom is being displayed, Ayler remarked: : “We weren’t playing, we were listening to each other”.50 years later, the music still sounds fresh and revolutionary. It’s 50 years old! Wow!

As revolutionary as Ayler’s Spiritual Unity was, Ornette Coleman’s Free Jazz, not only coined a genre’s name but completely turned the jazz world upside down.

As other worldly as The Shape of Jazz to come was, Free Jazz must have sounded like an alien invasion.

The music doesn’t sound nearly as wild 50 plus years later, but It remains one of my favorites of the 20 years of jazz listening I have done.

I always liked the double quartet format, The late bassist Scott LaFaro is one of the bassists, that adds a little more to the historical nature of the music.

Here is an album I found at a Dayton Ohio Half Priced Books location for .49 cents.

I had no idea the music would be this good, and I did not realize Ernie Krivda was a free jazz artist.

This is why I love collecting vinyl, had I not come across this record digging in the crates, I would have never thought about this artist.

Krivda is definitely on my radar, and he should be on yours too. I also like the 70’s sound, with some electric bass and piano to drive the rhythm, it’s a little different.

ts II is one of, if not my favorite Cecil Taylor album, I really like Cecil with an orchestra.

The music is avant-garde for sure, but I think progressive big band fans might like the music.

You wouldn’t confuse it with Count Basie. I believe this was the final recording with altoist Jimmy Lyons as well. If you like Segments II, you might like Sam Rivers’ Crystals or his Rivbia Orchestra.

How I acquired the taste for avant-garde jazz.

My path to this music called free jazz, or avant-garde jazz was atypical:

When I was growing up, the first music I remember enjoying was country music, Merle Haggard and Johnny Cash style mainly.

The big shock to the system for me was around 1988, when I was exposed to the thrash metal band Metallica for the first time, and via them, other bands like Slayer and Megadeth.

“Check out that Peter Brotzmann video above of his tune “Machine Gun,” to virgin ears that’s pretty rough, but when you cut your teeth on Slayer and Metallica circa 1988, that’s not really that far out is it?

My first exposure to jazz came with Miles Davis’ Kind of Blue, Bitches Brew, and In a Silent Way. I do remember thinking, “man this is some pretty diverse stuff”. I was really shocked at how hip Miles’ music was, it really spoke to me. I just became thirsty for more music.

The biggest thing I remember from that discovery process was thinking, “Man I can’t believe I missed this music the first 25 years of my life”.

Eventually I worked my way around the Davis and Coltrane catalog, and pretty much everybody else from Cannonball Adderley to John Zorn.

I like this music, you don’t have to, that’s just fine.

I do get it, many people will just say that free jazz is not music, it’s just noise. Other jazz musicians like Wynton and Branford Marsalis hate the style, and simply say it’s not jazz, just self-indulgent B.S. and act as if anyone who does is an idiot. 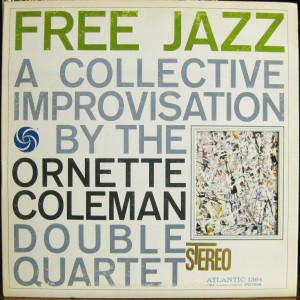 I never understood those neo-con’s who belittled any genre of music, or those who listen to it.

I would think that musicians with such high stature could at least be able to give the individual the ability to listen to whatever ever they want without having to gain their approval.

It doesn’t bother me that those critics don’t like free jazz. What bothers me, is telling me that I am some how mentally defective because I do.

Those particular critics don’t stop at simply saying they don’t like the music, they have to lobby against the music, and try to shame other people into not liking it, and to me that’s very sad.

*All photos are my own, or used with permission via Amazon.com*