One Part Mystery and One Part Cultural Journey, Chinese Cooking for Diamond Thieves is Entirely Delightful 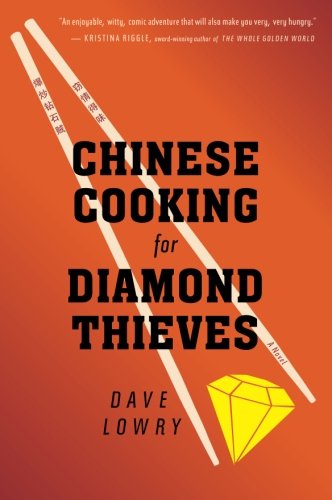 “What are the odds a slasher slash troubled loner would be able to speak Mandarin?” Then, before I could say anything, she added, “Bad Mandarin.”

“Long,” I said. “Long odds. Though not impossible.”

Generally I am not a huge fan of the mystery genre of fiction. The only mystery novels I tend to really get into are those which are less “whodunnit” and more about exploring a different culture, field of knowledge, or occupation I’d know very little about otherwise (for instance, Dick Francis‘ horse racing stories, Jonathan Gash‘s antique-expert Lovejoy series, or Andrea Camilleri‘s Montalbano mysteries set in Sicily.) That’s why I was intrigued after receiving a personal recommendation to check out Dave Lowry’s 2014 novel Chinese Cooking for Diamond Thieves, a story—I was told—that was far more about Chinese food and culture than a serious mystery or crime thriller.  I’m so glad now that I took the chance on this book, because it ended up being one of the most delightful and entertaining reads I’ve enjoyed in many months’ time.

Chinese Cooking for Diamond Thieves’ protagonist, Tucker, is a young man who we first meet while he is driving home after leaving Beddingfield College just a few credits short of graduation. Although he comes from a well-to-do New England family background, school just isn’t his thing; Chinese cooking is his true passion in life. He learned how to cook alongside childhood friend, Langston Wu, and while working in the kitchens of Chinese restaurants starting as a dishwasher and working up to being a real chef. It’s where he also learned to speak Mandarin and pick out the differences in Chinese dialects while jockeying for respect among his fellow cooks, becoming familiar with their slang, cultural traditions, and and of course the recipes that only Chinese cooks know and generally only prepare for other Chinese—we’re not talking beef and broccoli, here.

Chinese cooking—the real thing—doesn’t use Western broccoli. They even had to come up with a name to describe it when they first saw it.

At a rest stop during a snow storm, Tucker becomes intrigued by a young Chinese woman named Corrine who appears stranded there. It turns out she is trying to get to Buffalo, New York, on her way down from Canada, and she accepts his offer of a ride—for he has nothing better to do at the moment.

Thus begins Tucker’s adventure as he gets caught up in the trouble following Corrine, which involves missing diamonds, threatening thugs, potential gang members and FBI agents curious to know what exactly Corrine has gotten herself into. After leaving Corrine with a friend in Buffalo, Tucker drives on St. Louis to find his friend Langston and seek out kitchen work in the city’s Chinatown. Corrine eventually joins him there and gets work as a waitress in the same restaurant, Eastern Palace, where Tucker has gained respect for his culinary skills preparing not just the Americanized dishes ordered by the Caucasian lunch crowd, but the “real” dishes ordered by the most important Chinese customers. But trouble is still following Corrine, who may or may not be telling Tucker everything he needs to know in order to save his own skin let alone hers.

This novel proved to be an extremely fun and engaging read right from the start. Tucker and Corrine made for a terrific duo, slowly feeling each other out and developing their accidental friendship into a relationship laced with undercurrents of flirtatious romance and witty dialog. The supporting characters are all memorable, including Tucker’s boss at Eastern Palace who ends up so impressed with Tucker’s cooking skills that he “recruits” him for a competition between Chinatown’s other top restaurant chefs, and the FBI agent Ms. Masterson who asks Tucker to help her improve her home cooking skills while in the middle of trying to break the case.

As someone who is always fascinated about different countries’ cuisines and food traditions, the kitchen details in this book absolutely delighted me and kept me far more engaged than the mystery of the missing diamonds. I loved the descriptions of preparing and cooking food, like when Tucker makes the pork belly and rice he first cooks for Corrine.

I filled both bowls with rice and gave it all one last look, making sure there weren’t any spills or smears on the side of the serving platter. In a Western restaurant kitchen, it’s called “plating,” making sure the whole presentation looks clean and net just before the waiter takes it out to the dining room. In a Chinese kitchen, it’s called “pecking the nest,” because it looks like a mother bird using her beak to clean out any debris from her nest.

The details of what it’s like to work in a Chinese restaurant kitchen are amusing as well and speak of experience and great understanding. (And there’s a lot of humor, too, in the bawdy Chinese jokes and insults the chefs share among each other.)

They started calling me bai mu, slang for “stupid”, which they thought was amusingly even more appropriate in my case since it literally meant “white eyes.” In a Chinese restaurant kitchen, insults—constant barrages of insults—are not just the approved medium of communication. They are the only form of communication.

The fight scenes, when they happen, are also written with a keen eye for detail and understanding of martial arts. Tucker has practiced Chinese martial arts with Langston since an early age, and those skills end up serving him well on several occasions during this story—without making him seem like some kind of super-human action hero.  The entire book has an almost cinematic quality about it that I could see transitioning quite well to the movie screen, and I was left wanting to read more about the adventures of Tucker, Corrine, Langston and the rest of the characters we get to know here in the pages of this breezy, entertaining novel.

Author Dave Lowry is a food critic for St. Louis Magazine so he certainly knows his way around a plate of food. He’s also published a number of non-fiction books on traditional Japanese martial arts, but I do hope that Chinese Cooking for Diamond Thieves won’t be his last and only foray into fiction-writing. It’s a wonderful first novel full of promise for future storytelling delights. Highly recommended.