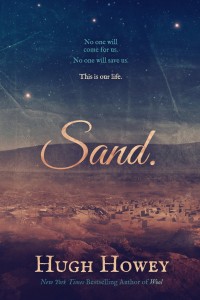 I recently read—actually devoured—author Hugh Howey’s  popular “Silo Saga” books, a popular trilogy that presented a truly unique post-apocalyptic vision of the future. I was so impressed by these books that I simply had to read more by Howey, and Sand looked the most intriguing to me—despite being warned that it was not nearly as good, a warning from the same person who had sold me on the Silo books to begin with.

I should have listened to that warning.

While Sand begins with an interesting premise, and has a strong opening that promises thrills and mysteries to rival what Howey achieved in Wool, Shift and Dust, this book ends up falling flat and failing to deliver on, well, just about everything. Whereas the Silo books showed an independent author near the top of his craft, Sand is a book in desperate need of some editorial guidance and assistance; it feels “self-published” in that bad way that normally keeps me wary of so many titles available today for my ereader.

Sand takes place some unknown time in our future, a dusty, gritty world built over the ruins of what once had been Colorado in the United States. This is a dessert world with sand everywhere, the old world and civilization buried deep below. Water is precious, as expected, and the people living in a shantytown take shifts keeping the sand out of their well. A large wall prevents the sand dunes from completely taking over the nearby town but everything is ephemeral; eventually the sand always wins, always claims what humans try to build.

Sand divers use special suits that allow them to “flow” the sand around them, to dive to great depths to recover clothing, tools, coins…anything that can be used, traded or sold. Sand diving is dangerous, difficult business, however, as controlling the sand at great depths requires incredible skill and endurance. Divers get around on “sarfers” that glide the dunes like sailboats, and operate much like pirates of the old seas with their own code of ethics and laws.

Divers and other scavengers are always seeking the location of the buried, fabled city of “Danvar”, and as our story begins one young sand diver, Palmer, may have just found it on a dive with his friend Hap. But the people behind their dive are dangerous, and may have far darker intentions than simply uncovering a legendary lost city.

Sand follows Palmer and the rest of his family as they struggle for survival in this post-apocalyptic world: his sister Vic who is the most accomplished diver of his siblings, his younger brothers Connor and Rob, and his mother, Rose, whom none are particularly close to at this point in time. Their father left them for “No Man’s Land” years before, leaving Rose with nothing but the local bordello to run (and eventually to offer her services at as well, in order to make enough coin to survive.) No one ever has returned from No Man’s Land, and during an annual camping trip Connor is ready to set out for it himself…until coming across a young girl who claims to come from No Man’s Land, and with an important message from “their” father.

Sand sets up all kinds of interesting situations and curious questions, yet fails to deliver when it comes to answering most of them. What happened, exactly, to the world that caused it to be buried under all of this sand? How is it that these survivors, with such limited technology and knowledge, can build and maintain high tech diving suits where they can control the sand with the power of their thoughts? Is this mysterious girl actually their half-sibling, and what is really going on in No Man’s Land? Who is really the hero and who is actually the villian? I’m not sure if Howey has set this book up to be the beginning of a new series, with these answers to follow in later books. But even if so, he has done  a poor job of telling a story here that is satisfying on its own even while leaving room for more in the future. Wool was an excellent first book in a trilogy because it answered many of the questions readers initially had about the Silo while still leaving room for more. Sand just seems to build and build and build, introducing characters and dangers and questions, and then drops most of them with a wholly rushed and incredibly unsatisfactory ending.  This was one of those books where I suddenly realized I was at 96% finished on my Kindle and thought, wait, that was supposed to be the big conflict and drama? That was the final confrontation with the “bad guys”? There isn’t anything else coming? I felt genuinely conned by the author at that point, as if he simply gave up instead of putting the effort into writing a satisfactory ending.

Additionally, the characters in Sand failed to really grab me emotionally the way they did in Howey’s Silo books. Again we have a strong female protagonist in Vic, but she’s almost too cold, too emotionally shut off. She’s not Wool‘s Juliette, more like a faded carbon copy of her. And the three brothers, Palmer, Connor and Rob, could almost be interchangeable except for Rob being obviously the youngest. If an author gives me characters I truly care about I can forgive a lot of plotting issues, but here I just saw all of the flaws.

At least one other reviewer, on Amazon, also noted that the story could be uncomfortably read as an allegory of today’s conflict in the Middle East, trying to put “terrorist” elements in a positive light against those who are somehow oppressing them from afar. I had some of those same thoughts myself while reading Sand so that too may have uncomfortably colored my reaction to the book.

Despite my disappointment with Sand, I’m still going to read some of Howey’s others books that I’m told are much better, more up to the level of the Silo Saga. So perhaps Sand was just an aberration, an idea that held promise but just failed to deliver in a satisfactory way.