“The Towers of Tuscany” is an Interesting, if Flawed, Historical Novel for Lovers of Italian Art 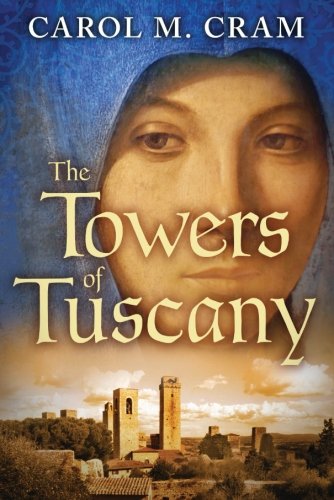 “The Towers of Tuscany” by Carol M. Cram. Available in both paperback and ebook format at Amazon.

Sofia Barducci is the daughter of a highly regarded painter in the medieval Italian town of San Gimignano. When Sofia was just a child, she learned how to paint and draw from her father, and though the lessons were often hard and grueling she developed a fine talent herself. Indeed, she continues to work in secret, assisting on projects for her father even though she is now married to a man who does not want her to paint. Art and painting, after all, are not appropriate endeavors for a married woman who should be devoted only to her husband’s needs and producing male offspring for him. And though Sofia had fallen madly in love with Giorgio Carelli when they first met, now she find him nothing but tedious and abusive, and longs for a life of freedom now denied to her.

But then tragedy strikes and her beloved father is killed during a vendetta attack, crushed by falling pieces of a fresco he had just finished for a wealthy client. He offers Sofia a chance to escape: the name of an artist she must seek out in the city of Siena, someone who could continue to teach Sofia about art and offer her a new life. Sofia must then make a difficult choice: risk her life and abandon her husband, or remain trapped forever in a life of drudgery and suppress her calling to art.

Sofia takes the risk, and eventually finds herself in Siena where she must then disguise herself as a young boy in order to apprentice in the artist’s workshop. It’s a dangerous game to play when her ruse, if discovered, could cost her life.

I am always interested in reading historical novels that explore Italian art history and artists of the Renaissance and medieval times. What especially caught my attention about “The Towers of Tuscany” was the fact that it was about a female painter, in a time when painting was very much considered a trade only for men.  What would it be like to be a woman during that time period, to have artistic dreams and desires that had to be suppressed because of one’s gender? Would the author treat the subject in a believable fashion? I ended up having mixed feelings about that by the end of the novel.

I liked “The Towers of Tuscany” initially for the well-written detail on painting techniques of the time period, and the wonderful descriptions of Siena, Italy. Siena is beautiful medieval city which I visited and fell in love with several years ago, one with an art and architectural style all of its own. With this novel I could definitely lose myself in the world of Siena’s narrow streets and magnificent palaces, recall the grandeur of the Piazza del Campo, and also imagine the atmosphere of the artist’s workshop in vivid detail. 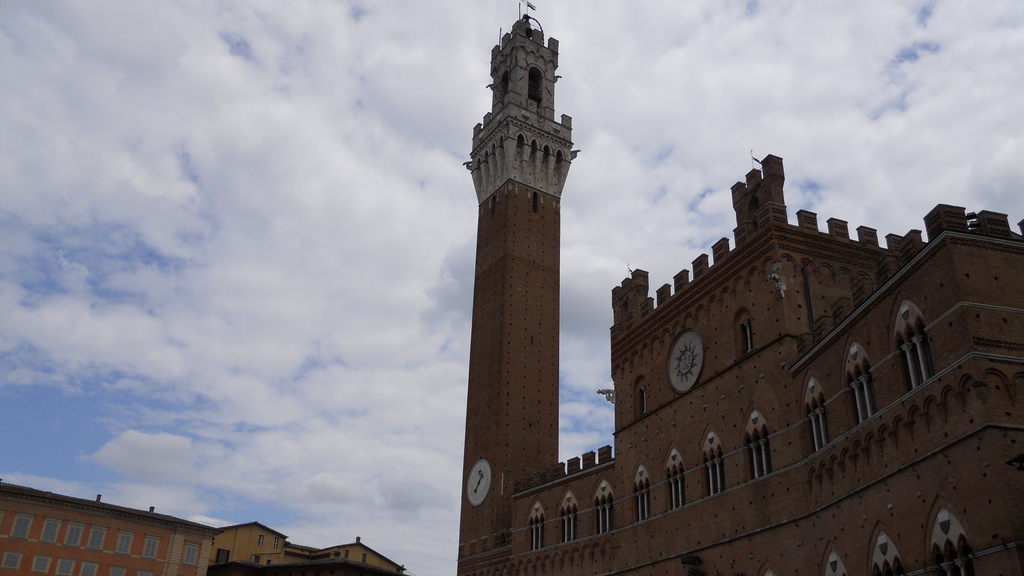 The Palazzo Pubblico at the Piazza del Campo in Siena, Italy. Photograph by the author, sockii.

I had problems, however, fully relating to the main character of Sofia as much as I wanted to. I liked her quite a bit in the first half of the novel as she came across strong and defiant toward the societal norms of the time: wanting to work in her father’s studio creating art, defying the expectations that women were only good for bearing children and keeping house. In fact as a childfree/childless woman myself, I really bonded with Sofia and her disgust at the notion of becoming a baby factory as she was expected to after getting married. She saw other women who have lost any sense of themselves outside of being wives and mothers and saw nothing desirable in that fate, not compared to what she could create in her art.

But then, as she established herself in Siena and began to gain respect as an artist (even in secret disguise as a boy), Sofia started to come across as far too arrogant about her abilities. She started to appear like a child spoiled by her father, unaware of real world issues and how her actions could risk not just herself but the artist and family who had been hiding her secret. She became far less sympathetic to me when she started risking her disguise as a male apprentice for a romance which she should have known would be doomed to failure, just as her marriage had been. Yet, sure enough, she again lets her dreams of a perfect romance sweep her off her feet only to find herself trapped in an even worse fate and hardship than before.

The last section of the book is quite sad and depressing, and while I believe we’re supposed to feel sorry for Sofia I ended up having to fight back a reaction of, “Well, that’s what you get for being so arrogant and foolish!” I don’t really think that was the author’s intention. And then the entire book ends with what has just become far too cliche in historical Italy fiction for my taste: plague comes, (almost) everyone dies. I truly stopped caring at that point. I would have loved a story about a defiant female painter in Tuscany who put her painting before romance and childbirth. But that wasn’t the story I ended up getting in “The Towers of Tuscany”, and I ended up therefore quite disappointed.

As a final note on the writing style of the book, I also felt that the repeated “flashbacks” to conversations between Sofia and her father became tedious after the first few chapters. They could have been much more effective if not used every time the author wanted to make a point about Sofia’s past. Additionally, some of the formatting was screwed up in the ebook edition I read, making it confusing as to what was a flashback and what was happening currently. (It does appear there is a new version of “The Towers of Tuscany” out since I read it, featuring “editorial revisions” which perhaps address these problems?)

Overall, “The Towers of Tuscany” was a bit of a disappointment for me. The book started out strong and interesting but eventually the characterization of Sofia herself ruined the story for me. I can’t say I’d recommend it except for some of the detail about medieval painting in Italy, and as a chance to “visit” the magnificent city of Siena as it might have been during that time.

Want to learn more about Siena, Italy? Then check out my travel guide at HubPages:

A Tuscan Holiday in Siena, Italy
Siena is a beautiful and unique medieval city in Tuscany, well worth a visit while in the region – or at least a day trip from Florence…