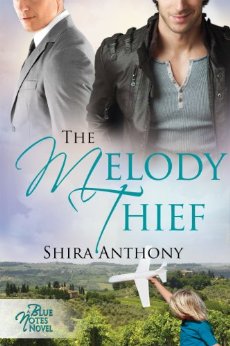 The Melody Thief by Shira Anthony. Available on Amazon.

I keep trying, and keep struggling, to get into the original m/m romance and erotica genre. If that seems odd to you then it’s personal revelation time (but not for those who know me well): for many years I was an active consumer, writer and fan of slash fan-fiction, and I’m not ashamed of that. I greatly enjoyed these stories that took my favorite characters from television, film and other media into new and “unexplored” (officially at least) territory. These stories were my escape, my guilty pleasure, my comfort reading for many years.

The problem is, there hasn’t been a new “fandom” that’s excited me in quite some time. The last very large fandom I really got involved with was Star Wars after the release of The Phantom Menace (shut up, I know. But I was powerless to resist the combination of Liam Neeson and Ewan McGregor. Mrowr.) I got into a few small, “orphan” fandoms after that but those tend to run out of good stories and good writers very quickly.

So I keep looking to the original gay fiction genre to scratch my itch for the kind of romance stories I enjoy. But for the most part I keep coming up short on getting the same satisfaction from these books and stories I get out of really great slash fan-fiction, and I keep trying to figure out why.

There have been a few such series I’ve really enjoyed, most notably Michael Schiefelbein’s Vampires series (I still have the last book waiting on my shelf that I’m saving for a rainy day). But for the most part I end up finding a lot of the small press m/m romance books lacking in what I get from good slash fanfic: compelling, interesting and “hot” stories about characters in which I can become emotionally invested enough to care what about what happens to them.

Shira Anthony’s The Melody Thief came close to scratching that itch for me, but didn’t quite hit every “note” to my satisfaction. Even so, it was close enough that I may give more titles in the “Blue Notes” series a go as this title did succeed with some of the relationship dynamics and aspects of what I do love in romance fic.

The central character of The Melody Thief is Cary Redding. He’s a successful and talented cellist living in Milan and in demand all around the world. But a troubled childhood and domineering, demanding mother has left him with little sense of his own self-worth beyond what he can achieve with his instrument. When not performing, Cary disappears into the seedy bar scene looking for cheap thrills – and meaningless sex – under the pseudonym “Connor” so as to protect his career and real identity.

One night he is assaulted returning from a bar and rescued in the nick of time by Antonio Bianchi – a gorgeous, slightly older lawyer who takes “Connor” in under his wing while he heals from his physical injuries. But can Antonio also heal the hurt in Cary’s heart? Can Cary do the same for Antonio, allowing him to finally move on from the loss of his own long-time partner years ago? And how will their relationship be complicated by Antonio’s young son with a lesbian childhood friend and her partner, and the sudden return of someone from Cary’s past long thought dead? These are the some twists and turns of the story of The Melody Thief.

A reasonably entertaining read if lacking in real emotional depth

This book was recommended to me when I was at MediaWest*Con earlier this year, and browsing some of the goodies available from the other vendors in the dealers room. Dreamspinner Press was one such vendor there and I was curious to check out what they had to offer since I hadn’t read any of their titles before.  I described what I tended to like and what I wasn’t so interested in. Personally, I’m really not into kink for kinks’ sake, which ruled out a lot of offerings. I also tend to like more mature characters – ie, no “twinks” or guys just out of their teenage years; I want characters who have some life experience and past behind them that makes for an interesting story. That also seemed to rule out a lot of the titles they had available.

But I do like stories that weave music/musicians into the story and don’t mind a little age/experience imbalance between the characters – hence The Melody Thief was offered to me as perhaps the title I’d find most interesting. I was sold on several aspects that appealed to: the setting in Italy, the main character being a musician, the dynamic of a (slightly) older stoic character and a younger, more impetuous one, each with their own issues to work out. To a degree, the book delivered on each of these points, although perhaps not quite to the degree I’d been hoping for.

At first, I was concerned that the story was going to be too much about Cary trying to figure out how to come clean to Antonio about his “double-life” and who he really was. Fortunately that part of the story is actually resolved fairly quickly, and the other issues in these characters lives come more to the forefront. Cary is struggling with the idea of someone wanting to have a real relationship with him when he feels unworthy of it. He struggles, too, with Antonio’s silence over his previous partner, and if he can ever truly fill the void left in Antonio’s heart. He also has to deal with the complexities of Antonio being a father, and developing a relationship with young Massimo when his own childhood was so difficult and stilted by his mother’s pressure to push him as a musician and the absence of his father.

That missing father becomes a central part of the second half of the story. What do you do when someone you believed dead – someone who was never part of your life in a way you remember – suddenly appears out of nowhere and wants to re-establish a relationship with you? This was the point where the story became most interesting to me, and I thought Shira Anthony did a very good job trying to explore these issues within the constraints of what is otherwise a fairly traditional romance novel. There were parts of this story which hit unusually close to home for me on many levels and with many of the revelations that followed, even if they were a bit telegraphed by the writing. Still, it made the story more interesting and absorbing to me.

A bit less successful from my point of view was the evocation of Milan as a setting and environment. I know Milan is not the most romantic and beautiful of cities of Italy but I have been there, and really did not feel as if The Melody Theif evoked much of its atmosphere or made me feel as if I was in the city versus any other generic “European” locale. Just throwing out the name of the Sforza Castle or talking about a small cafe near the main train station didn’t transport this reader there. Again, I think back on how fantastically Michael Schiefelbein evoked the atmosphere and feeling of Rome in Vampire Thrall, how much that added to that particular story, and I know it’s something a skilled writer can do when they really know and love a city. I didn’t get that feeling of Milan here.

I also, honestly, ended up skimming over most of the explicit scenes as I didn’t feel like they were adding real character development – and just weren’t interesting reading to me because I hadn’t reached that level of connection with the characters. There was nothing necessarily wrong with how they were written, but I just wasn’t invested in the characters enough need to know the details of their sex life or find it particularly worth reading in detail.

All in all, it was pleasant enough light reading that I basically finished over three afternoons at the gym. The book was cleanly edited and published with no glaring typos or formatting issues as can be the case with some small press publishers. I wouldn’t say I found it worth the cover price I paid for the paperback edition, but it would have been a fair read for the Kindle price. That’s probably how I’ll go if I end up reading the rest of the “Blue Notes” series in the future.

Other Titles in the “Blue Notes” Series

Available in paperback and Kindle formats

There are currently 4 published books in the “Blue Notes” series, each of which can be read as a “stand alone” novel. They explore some of the other characters in the same universe and all feature a classical music theme in some way. 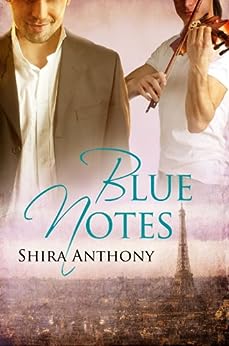 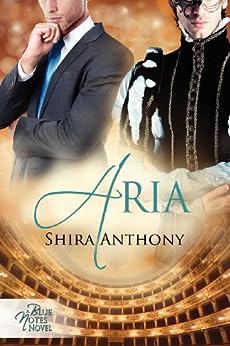 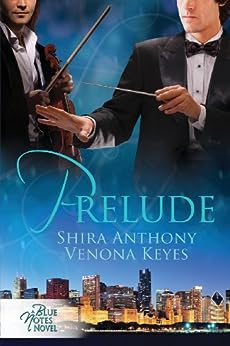 You can also learn more about the author’s other romance books and upcoming publications at Shira Anthony’s Official Website.