The Life and Times of The Police’s First Guitarist

Before Andy Summers came along, The Police consisted of Stewart Copeland, Sting, and a Corsican named Henry Padovani. Ever wonder what happened to Henry after he was let go from the band? Read this book to find out! 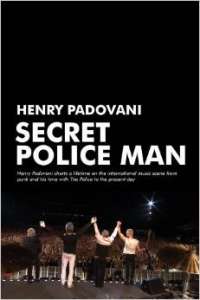 Those interested in the punk and new wave music scene of London in the late 70s and early 80s should find an interesting perspective in “Secret Police Man”, the autobiography of The Police’s first guitarist, Henry Padovani. That’s right, in case you didn’t realize, The Police as a band did not always consist of Sting, Stewart Copeland, and Andy Summers. In the band’s earliest days, a Corsican by the name of Henry Padovani was their guitarist – chosen by Copeland more for his great “punk look” than his abilities with his instrument. A one-off gig where Sting and Copeland performed with Summers eventually led to The Police’s change in line-up, and opened up the band’s path to world superstardom.

While the fame and fortune of his one-time bandmates may have passed him by, Henry enjoyed a fascinating and unique life in the music industry nevertheless. He would go on to perform with other acts such as Wayne/Jayne Country & The Electric Chairs, and form his own band The Flying Padovanis. He would become part of the European division of IRS records, and later manage the Italian superstar performer Zucchero. Henry’s recently published autobiography, “Secret Police Man,” covers all of these career highlights and many personal adventures through his lifetime. The book also describes the events leading up to his brief “reunion” on-stage with The Police during their 2007-2008 Reunion Tour.

Henry’s is a fun story to be told, and he comes across as a charming, easy-going fellow – the kind of person you’d love to hang around in a bar with, sharing drinks and stories while listening to musicians jam. Police fans should find some unique insights into the early days of the group here, making it a nice complement to the autobiographies of Sting, Stewart and Andy which have all been released in recent years. There are some racy bits, and stories of indulgence in sex, drugs, and alcohol, but it’s not presented as a salacious “tell-all” expose. Padovani is just brutally honest, admitting to mistakes made as well as good times had. He presents sad stories of other musicians he knew who lost their lives to addictions and drugs, and seems thankful he came out of that scene happy, healthy, and alive.

However, “Secret Police Man” does have some problems which need to be addressed in this review. Specifically, the book is clearly self-published and desperately in need of an editor and proofreader. I realize much of the English text was translated from an original French edition, but whoever did the translation was seemingly not well-versed in English grammar at all. This problem is especially evident in the rampant punctuation inconsistencies and errors, most particularly involving dialog and quotes. Sometimes punctuation is missing entirely (sentences with no end periods), sometimes it is doubled (inside and outside of quotes), sometimes it is inside quotes, sometimes it is outside of them…basically, grammatically, the book is a mess. If the punctuation were at least consistent one way or another I could have dealt with it more easily as a reader, but as it is nearly every line of dialog is punctuated differently making the entire publication look very sloppy.

There were also many other simple errors throughout “Secret Police Man” such as misspellings, misalignment of paragraphs, inconsistencies of how song and album titles are noted, etc. It leaves the impression that no one bothered to proofread for these details at all after the initial translation was completed. Parts of the book’s narrative are also jumbled, with abrupt transitions in time and story, jumping here and there without sense or reason. Again, an editor could have helped dramatically with providing more structure for Henry’s stories.

In conclusion, “Secret Police Man” is a book I can recommend only for diehard fans of Henry Padovani, and students of the music scene and individuals described within. Other readers are not likely going to be willing to put up with the amateurish presentation, which is a shame. I really feel like this publication could have been a much better book with a little more care and effort put into it editorially.