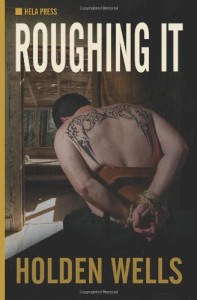 Roughing It by Holden Wells. Check Amazon for available copies.

Scott Thompson is an adrenaline junkie. Being the guitarist in a extremely popular metal band isn’t enough for him; he’s always on the lookout for a new thrill. But he’s also getting older, approaching forty now, and simply finding trouble on his own in dangerous sports and adventures is no longer satisfying his cravings.

Wanting something more, something even more exciting than usual, he signs up for a “ride” provided by a mysterious operation only known as The Company.  They take your money and in return absolve them of everything short of the loss of your life to have your darkest, most potentially dangerous fantasies fulfilled. For Scott, it’s the chance to live out a scene almost straight out of Deliverance.

But is Scott really up for the ride that he’s paid for? He’s not even sure if the three rednecks who accost and capture him in the wilderness are from The Company or not. Eventually he learns the truth, and finds that he’s not just testing himself but testing the leader of his tormentors, one Johnny Lee, who is used to weak-willed rich boys and CEOs who barely manage to last 12 hours on the Deliverance ride—not the 48 hours that Scott has signed on to endure.

Right up front, let’s be clear: this is not your typical gay romance novel. It’s pretty much straight on erotica of a pretty rough nature, focused on a lot of pain play and highly dubious consent. If that isn’t really your kind of “id fic” or taste in kink, you should definitely skip this one. It’s not at all my taste, which is why I started to read this several times but never got too far into it, kept putting it aside, but then finally read it through in one afternoon session (at 120 pages it’s more novella than novel.) I pretty much only kept reading because the author, Holden Wells, does have a real knack for setting a scene, writing action, and building tension. Unlike a lot of self-published authors, Wells knows very well how to show and not simply tell, and there’s no time lost on wordiness or bland details that bogs down a lot of what I try to read in the m/m genre.

There’s also not a lot of character development, either, at least not that we readers see on the pages within the book. In fact I daresay that the back cover blurb tells us more about Johnny Lee than we learn throughout the rest of Roughing It, which suggests to me that the author has these characters fully developed in their head (which makes it all the more pity we don’t see that come across on the written page.) Scott himself starts out pretty much a blank slate and remains so until nearly the end of the story. We know he’s a guitarist in a heavy metal band, that he identifies as bisexual and has an assistant named Ian, and that he has a taste for extreme situations. We know that a tragic car crash in his past that cost him a friend and left with a nasty physical scar. But that’s basically it. I wanted to know more about Scott and who he is, why he is so hooked on the thrill and finding pleasure in the abuse he signed himself up for here. As it was I had a hard time getting into his head and why he wanted to put himself through such torture—nor did I get any enjoyment out of reading about his torment.

The dynamic between Scott and Johnny Lee only finally started getting interesting to me, and I only started to get a feeling for their characters, in the next to last chapter of this book when Scott’s “ride” is over. Now “out of character” we finally we start to get a glimpse of these men really are, but then the book is over and that’s it. There is a teaser at the end for a sequel, Lockdown, which says it would be published in 2014, but I can find no signs of it online. Pity as the teaser makes it look like it could be a lot more interesting to me, with deeper exploration of these characters, than Roughing It proved to be.

It’s hard for me to give this book a star rating because it really would depend on what your fictional tastes are in this genre. If the rough aspects appeal, it’s probably a good 4-star (out of 5) read because it certainly delivers on that front and is very well-written for a self-published novel. But if you’re more about character development, romance and more of a “vanilla” reader like I am, you’ll probably want to give this one a pass as I’d rate it at about 2.5 stars instead.