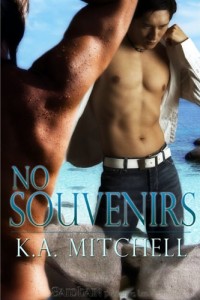 No Souvenirs by K.A. Mitchell. Book available in Kindle and print editions from Amazon.

Trauma surgeon Jae Sun Kim is badly in need of a vacation. A dream job that would have gotten him away from Florida—and his traditionally-minded Korean parents—has fallen through. So he books himself a scuba trip on a dive boat out of Belize looking to relax and get away from it all, but he doesn’t count on developing a bad case of seasickness once he hits the boat. He also doesn’t count on starting up a steamy affair with a hunky red-headed, wise-cracking dive master from Texas named Shane McCormack. Their initial confrontational sparks quickly turn into mutual attraction that neither can deny.

Things take a more serious turn for Jae Sun and Shane after the two of them face a life or death situation together. In the aftermath, and once they get back to shore, will their vacation fling turn into something more serious? Can Shane really settle down and stay in one place for more than a short period of time? Can Jae Sun open his heart enough to give Shane reason to stay with him?

No Souvenirs started out great for me and I absolutely loved the first half of the novel. Admittedly  the first chapter or so didn’t hook me as I was worried I’d be able to put up with over 200 pages of Jae Sun’s arrogance and Shane’s snarky teasing. But then I loved the details of scuba diving, the tropical setting and atmosphere, and how things between the two characters were starting to heat up. And then, wow, their first full sexual encounter? That was one of the best erotic scenes I’ve read in quite a long time, especially for two characters we as readers were just beginning to get to know. The author really used the scene to show us more about these two characters’ personalities instead of just putting it in there to be gratuitous.

And then when “trouble happens” during a night dive, leaving Shane and Jae Sun dependent on each other for survival? I was eating up the hurt/comfort with a spoon and ready to declare No Souvenirs my favorite m/m read in years.

But then the rest of the book happened.

Once the big action event is over and the characters are off the boat and back in Florida, their story  ground to a complete halt for me. The second half of the book was basically nothing but more and more sex scenes (which very quickly became boring, repetitive and skim-worthy), tedious detail about setting up house together (can we say “curtain fic“?), and silly contrived “drama” that could have been resolved in give minutes if the characters just talked to each other instead of jumping to ridiculous conclusions. It felt like such a pity that an author like Mitchell, who showed she could set up real tension and action in the first half of the story, fell back on such tedious cliches and overused plotlines from the m/m romance genre.

This book is actually the third of four (to date) in the Florida Books series by K.A. Mitchell, although each is focused on a different couple in the same shared universe so you don’t need to read the previous ones to understand what’s happening here. Two characters from the previous book Collision Course, Kim’s friends Aaron and Joey, do show up in the second half of No Souvenirs and to be honest I didn’t like either of them here enough to want to read their title. No one else is really in this book except as extremely minor background fodder, and it bothered me as well that the only female character at all mentioned by name, Shane’s pregnant sister, is only talked about in how much of a “bitch” she was being thanks to “pregnancy hormones”. (I really could do without a helping of misogyny in my m/m gay fiction, thanks.)

I also wasn’t completely sold on Jae Sun and Shane’s long term potential for love and a lasting relationship. Jae Sun barely begins to open up to Shane about some of his past and why he’s so closed off emotionally at the very end of the story. Shane seems all too quick to want to settle down after spending all of the rest of his life drifting and seeking new adventures. Opposites can attract, for sure, but by the end of the book I still didn’t really get what each other had in common or what could keep them together beyond physical attraction and compatibility.

All in all I guess this simply didn’t end up being the story of romance in a tropical setting that I’d been hoping for. I can only give it about  **1/2 (out of 5)-star rating. The first half of the book was a solid 4-star read, which made the rest of it such a disappointment in the end.