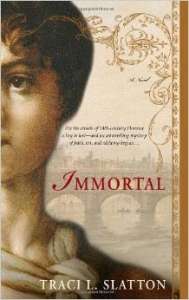 Immortal by Traci L. Slatton. Buy it now at Amazon.

When we first meet Luca Bastardo, the central character of Traci L. Slatton‘s 2008 novel Immortal, he is awaiting execution—and it is a fate he is willing to accept after living a very rich life spanning nearly two centuries. Until death arrives to free him, he is writing out the incredible story of his life, one which began as an orphan on the streets of Florence and where he encountered many of the great figures in Italian Renaissance history: Giotto di Bondone, Francesco Petrarca, the Medicis, Sandro Botticelli and even Leonardo da Vinci.

For most of his life, he has sought out the truth of his seemingly immortal existence, and also the love of his life whom he once saw in a vision. Yet enemies have always been not far behind him, namely the descendants of a brothel owner he killed after suffering years of abuse, neglect  and sodomy while enslaved under the man’s control as a child.

Immortal presents an intriguing fantastical premise, and was a book that engaged me rather quickly. I enjoy historical novels set in Italy, and this book takes the reader through some of the great cultural highs and also brutal lows of the Renaissance, from magnificent works of art to the horror of the Black Death.

Luca’s curious abilities and unique nature emerge early on in his life, presenting questions that he cannot answer while he endures and witnesses terrible brutality. He finds solace during his young years of forced prostitution by escaping mentally to the beautiful artistry of Giotto’s frescoes, eventually encountering the artist himself and earning one of the first notable friendships of his long lifetime. The details of the abuse suffered by Luca as a child—and the torture and deaths of other children in the brothel—are quite horrific and may be disturbing to some readers, but the events shape Luca for good and bad for the rest of his life. They are also, sadly, very likely true of what some unfortunates suffered during those times.

Upon finally achieving his freedom from the brothel, Luca’s travels bring him into the home a Jewish family after he saves the father and one daughter from stoning. This section of the novel provides an interesting look into what it was like at the time for those required to live in one of the Jewish “Ghetto” areas of Italian cities. Later, after leaving the family, Luca collects bodies from the streets of Florence during the Plague as he is curiously immune to the disease. While doing so he meets a mysterious alchemist who seems to know some secrets about Luca’s existence and powers. It is during his time visiting the alchemist that he receives a vision and is given a choice: to live for many more centuries but never know true love, or to find the love of his life but live a much shorter lifespan because of it. He chooses the latter, but it will be many more years—and dangerous adventures—before he finds her and learns what life is really meant to be about. 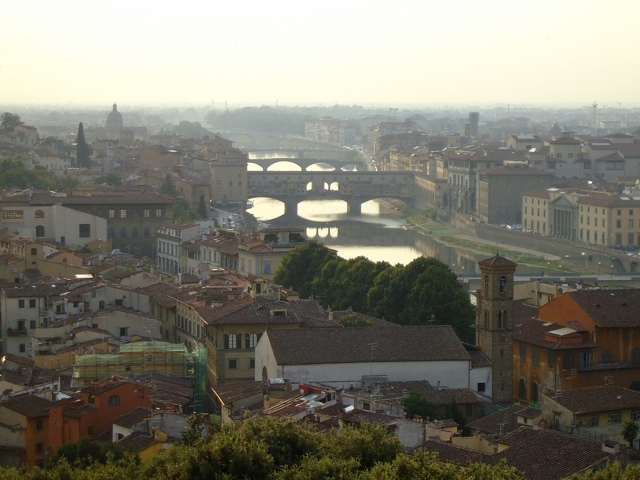 The Italian city of Florence, where much of the action in Immortal takes place. Photograph by the author, sockii.

I think the main difficulty I had with Immortal is that Luca, as a character, left me strangely cold. I did not find him especially likable nor did he possess anywhere near as notable or memorable a personality as the historical figures and others he encountered throughout his lifetime. Of course, some of that makes sense if one takes into consideration how his early sexual abuse could turn him cold, distant and distrustful; he struggles for the rest of his life to accept homosexuals, even those like his friend Leonardo who swear no interest in young boys, only desiring “equal” men.

The female characters in this book also fail to serve much purpose beyond being somewhat shallow archetypes and caricatures. Luca uses women for sex knowing he does not love them, for they are not his “one” —and at least one such woman dies brutally because of her un-returned love for him. That does not help Luca be a main character for whom we feel sympathy and understanding.

The “secrets” of Luca’s longevity were also somewhat disappointing to me when finally revealed, involving some Da Vinci Code-like mysticism and conspiracy theories related to the Cathars and the Sons of Seth. And one scene, when Luca is having a supposedly mystical vision while under the influence of the alchemist, made me cringe and nearly laugh out loud as it was such a rip-off of Luke’s vision on Dagoba in The Empire Strikes Back, wherein he battles and beheads Darth Vader only to find himself behind Vader’s mask.

Even with these flaws, I give Immortal a reserved recommendation for those who enjoy historical fiction set in Italy. Your enjoyment of the book will surely be higher if you have some familiarity with 14th and 15th century Italian history and notable figures, as the author does a fine job of bringing them to life. If only the long-lived Luca Bastardo had been as memorable as the historic people whom he encountered throughout his many years…