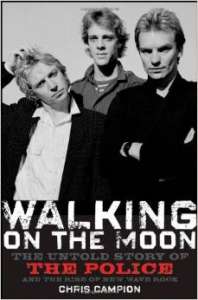 “Walking on the Moon” by Chris Campion. Available at Amazon.

As a die-hard fan of The Police, I was seriously looking forward to reading this new book about the band when it was first published in 2009.

Unfortunately, Chris Campion’s Walking on the Moon: The Untold Story of the Police and the Rise of New Wave Rock is, quite easily, the most negatively-toned rock “biography” – and I use that term very lightly in this case – I can recall ever reading. While there is some interesting information contained within the book’s 300 pages, each of those pages is so thoroughly laced with such glaring disdain on the author’s part for his subject matter, one is left truly puzzled over what motivated him to write the book in the first place.

Is it pure sour grapes over the success of a band whose music he clearly dislikes, a band whose popularity he can’t understand unless dismissed away as the result of clever, aggressive marketing and the political climate of the time? Is it just a cheap shot at trying to cash in on the band’s name before buzz over their reunion tour fades away?

I’m not sure. What I am sure of is that Campion has put considerable time into researching his subject, if only to make sure there is no negative comment ever made about the band or its members, nor any questionable or scandalous incident about them, that he misses including.

The negativity starts subtly, but begins to creep in through even the simplest word choices used to describe the band members, their associates and their actions. Andy Summers “fumes”, “whines” and “sneers” throughout the book, painted by Campion as an intensely bitter man of questionable skill as a guitarist, clinging desperately to The Police as his last chance at stardom after failing to make it earlier in his career. Stewart Copeland is portrayed as a spoiled youngest child, an immature “frat boy” type, a pothead whose drumming is only referred to by Campion when he can bring up criticisms of Copeland’s time-keeping. Sting is a cruel egotist who Campion spends considerable effort trying to psychoanalyze, repeatedly referring to his Catholic upbringing and mother’s infidelity as the root of his many problems. Miles Copeland III is focused on nearly much as the band members themselves, illustrated as the ruthless force behind their success through his promotion and marketing schemes – even as all of his problems with other acts and artists (and later the Police themselves) are thoroughly detailed. The only one who gets off relatively unscathed is Ian Copeland, “the only good one of the bunch”, supposedly. Oh, and of course any of the band or Miles’ associates through the years who were interviewed directly by Campion so that they could air their personal grievances, including Cherry Vanilla, Jayne Country, Nigel and Chis Gray, and members of the band Squeeze.

Those looking for any real analysis of the band’s music? Look elsewhere. Campion has little interest in doing so beyond taking shots at Sting’s lyric writing and discussing the struggles they had in the studio, recording. Those hoping for good details on the three band members’ post-Police careers? Not to be found here. Sting is given the greatest focus, but mostly so he can be taken to task for everything including his poor acting, profiting off of black music and musicians, his dubious charitable causes and also his financial and personal relationship woes. Stewart is mostly dismissed except for Campion going into great detail over criticism of Copeland’s opera “Holy Blood and Crescent Moon”. Andy’s solo years barely merit two pages of coverage, primarily devoted to Campion mocking his photography as “little more than nicely-composed snapshots printed in black and white to give them a semblance of artsiness.” 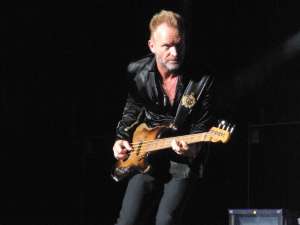 Sting on stage during the 2007-2008 Police reunion tour. Photograph by the author, sockii.

The band’s reunion tour is briefly covered in the last chapter, primarily rehashing details well-covered in the press already and here used to further Campion’s argument that the band had no real impact on music except as an extreme marketing success story. He repeats much of his earlier criticism of the entire new wave movement, which has been almost as central a subject of the book as the band it’s advertised as being about. What he seems completely unaware of – or chooses not to acknowledge – is the lasting influence the band’s music has had on generations of musicians who have followed them. The Police made solid pop-rock music that was well-crafted and featured musicianship that was inspired, and inspiring. Whether they were as groundbreaking or revolutionary as The Beatles or Elvis Presley is not and should not be the question, nor the only meter by which their merit as musicians should be measured.

Looking through the notes and sources at the end of the book leaves the impression that Campion was quite thorough in his research, as previously noted. But he was also careless and sloppy. He makes numerous small mistakes that devoted Police fans are sure to pick up on, and it leads one to cast doubt on the veracity of all matters presented in the book as a result. For example, he gives the wrong date for the band’s final concert of the reunion tour at Madison Square Garden (August 9, 2008 when in fact it was August 7, 2008). He also claims they came out on stage in Police uniforms for the show, which was untrue; Sting donned a Police hat at the beginning of the show but that was it. He makes mistakes about which songs were cut from the second leg of the reunion tour and which ones were added. All minor details, yes, but it adds up to contribute to this reader’s poor impression of the work as a whole.

He devotes little effort to covering the fandom for the band, except again where he can potentially derive the most scandal and shock value from it. For instance, he devotes a page to the “bizarre” phenomenon of “slash fiction” about the band, misrepresenting bandfiction‘s roots and showing his lack of understanding of the genre and its motivations as being something undertaken by “female groupies”. That said, he does seem rather taken by the work of sidewinder, one slash author, describing her fiction as “extraordinary” (in fact it seems to be one of the few things in the entire book he has any positive words for!) The only other times he talks about the fandom at all is when he can bring up kerfluffles and incidents such as Stewart’s infamous “Disaster Gig” blog post, and an incident involving a Police website set up by Miles Copeland that was accused of cheating money out of fans until the problem was addressed by Stewart and Andy. Perhaps given how little Campion seems to understand about the band’s popularity, it would have done him some good to actually interview some fans of the band to get their perspective, instead of trying to force his theories and hypothoses onto them.

Which in the end is all a shame, as a good book thoroughly covering the band’s complete history without an obvious agenda and bias would be much appreciated. This book simply isn’t it. One is much better off reading the respective autobiographies of each of the band members, and looking to find the truth somewhere in the middle of their individual recollections and points-of-view.