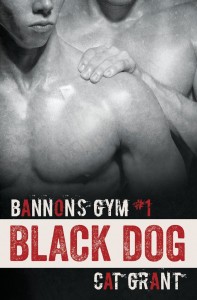 “Black Dog” by Cat Grant. Available in Kindle and print versions at Amazon.

One early morning, Eddie Roscoe shows up at the family diner where he works as a cook to find a young runaway fighting a drunk over his few meager possessions. Eddie offers the kid (named Tom) a cup of coffee, some breakfast, and a place to sleep for the night. Tom is cautious of the help at first but soon finds himself working in the diner’s kitchen cleaning dishes, waiting tables, and building up a relationship of cautious trust with Eddie and Eddie’s mother, Gloria. Tom also starts training in mixed martial arts at the local gym run by Danny Bannon, someone with whom Eddie has a bit of a (sexually) tense history.

Tom, who had left home to get away from an abusive father, shows real signs of promise in the ring—much like Eddie himself had, once, before he got out of competitive fighting. But can Tom reign in his anger and really build himself up so he can get over his difficult past? And can Eddie and Danny get beyond the tragedy in their own past which still haunts them and has kept them apart?

I received a copy of Black Dog from a friend who thought I would enjoy this somewhat unique book in the m/m romance genre. And there were a number of things I did like about it: there was certainly more story, dialog and action than graphic sex, at least as much as could be included in a quick-read novella of about 130 pages. I also liked that the book focused on somewhat older characters than we usually see in a lot of m/m romances, as Eddie and Danny seem to be at least in their 30s, and their history makes them more interesting characters to me than the twenty-somethings/late-teenagers that often seem to dominate the genre. Tom’s “found family” of Eddie, Gloria and Danny made for a unique combination, and each of these four main characters was overall likeable.

However, I can’t say the story really grabbed me the way I was hoping it would. The point of view switches between Eddie in the first-person voice and Tom and Danny in the third-person were awkward, confusing, and I simply don’t understand why the author would make such a bizarre choice. (Why not just stick with all three characters in limited third-person?) I’m not that big on boxing and MMA so the descriptions of fighting techniques and training just…weren’t all that exciting to me. But most of all, Black Dog just felt rushed and underdeveloped; there could have been a lot more explored here as far as Eddie and Danny’s back story, as well as making Tom more than just an angry kid with an abusive father. What was the real extent of Eddie and Danny’s relationship back in high school? Was the “tragic event” in their past what led Eddie to join the seminary, which he then left? There were hints of character development here but not enough to get me invested in their relationship, nor enough to make them feel and read like fully fleshed out characters with unique personalities (often I found myself having to back read to keep straight who was Eddie and who was Danny in their conversations.)

I know this title is just the first in a series of (so far) three books in the Bannon’s Gym series by author Cat Grant, so maybe we see more of that character development in the future titles. But there wasn’t really enough here to sell me on rushing out to buy and read those other titles to find out. I would have rather read one longer, better developed story than being made to feel like I was just getting a “teaser” of one here, and that I’d have to buy two more books to really get the full novel.