It is Ironic that a music so maligned critically by the stuffy jazz establishment, would get such love from modern contemporary soul and hip-hop artists by the end of the 20th Century.

Soul jazz, a music which has its roots in the hard-bop jazz music of the 50’s, and along with hard-bop added a sprinkling of the Southern Baptist Church to the sound.

In the 70’s this sound morphed into a jazz funk style that smoothed out the edges, but still had enough heat to remind you this is great black music.

Artists like Julian Cannonball Adderley added a little more soul without electronics, but The Hammond B-3 organ brought a earthiness to the music, organist Jimmy Smith especially.

The 1960’s ushered in an earthy jazz, fused with funk and Latin Sounds

By the late 60’s, Contemporary music as well as jazz made some incredible changes, James Brown and Sly and the Family Stone were champions of a new black music called Funk, this is where soul jazz made an even more commercial turn.

When combining these elements of funk and R&B, often times droning grooves, call and response were the main hook to the music, but done in a very creative way, with long jamming tenor or alto sax solos, the emphasis on a bass heavy grooves.

You can certainly see why those Hip-Hop artists look to this music for inspiration. Blue Note was Sold to liberty records in the mid 60’s, and as a result the label decided to go in a more commercial direction.

Many artists like Lou Donaldson and Donald Byrd embraced this with open arms, Organists like Reuben Wilson and Big John Patton were churning out high quality soul jazz throughout the late 60’s.

Personally I find this style of music irresistible, the earthiness and authentic sound mainly.

Soul Jazz is feel good music for sure, the type of music you jam driving down the road with the top down, or on a Saturday night out on the town.

If you can’t get into to this music, you just might not have a soul quite honestly. I have compiled a list of my favorite Blue Note Rare Grooves below, you can also check out some of the YouTube videos of the music and judge for yourself.

If ever there was an album for driving around with the top down on a hot summer night, Blacks and Blues is it. I can see no flaws in the music what so ever, if you take it for what it is, a contemporary jazz funk album.

Brother Jack McDuff was another of the long line of late 60’s jazz funk organists to cash in on the soul jazz craze. Also another album that has much more experimentation than you would think, but “Flat Backin” is the groove monster here, and worth the price of the album alone, Moon Rappin should not be missed.

Lou Donaldson was a Charlie Parker disciple early on his career, by the time Liberty bought out Blue Note, Donaldson discovered a winning formula of organ based soul jazz, with simple grooves and heavy bass and drum accents.

Almost all of his works in the late 60’s follow this formula, plenty of high quality solos, and enough variety to keep you interested. Alligator Boogaloo is one of his best, despite the weird and unrelated cover art.

Eddie Henderson was a very underrated trumpeter that came to fame with Herbie Hancock’s late 60’s early 70’s Mwandishi band. Eddie’s Blue Notes are a little more in the pocket groove wise, they are not as experimental as those Mwandishi albums are. Heritage is a definitely in the pocket jazz fusion with those funky breaks.

Reuben Wilson, another underrated Hammond player grooves like a mutha on Blue Mode. Serious Memphis style soul jazz. “Bambu” will shake your senses. I know this music is not exactly the most cerebral, but that is not the point; this is feel good music, the music you might hear at BB-Que joint in the south. This is music you want to get up and shake your booty to.

Big John Patton is one of the many Hammond organ players of the 1960’s, his music always has a nice down home groove, especially the stuff with guitarist Grant Green involved.

It is fairly obvious that Reuben Wilson is a seriously important figure within the realm of soul jazz, a highly influential Hammond organ player.

He’s someone who found a niche and rolled with it on through the 70’s. On Broadway was Reuben’s first dance with the new Liberty owned Blue Note. They were much more receptive to funkier element now, why not huh? Lot of money in them funk beats.

My Favorite Wilson track is “Ronnie’s Bonnie”, just an irresistible groove is set up here. The organ’s punchy soul strut sent shivers up my spine the first time I heard it. I knew this was a bad dude, and I most certainly had to find out more… hear for yourself.

I have now been collecting vinyl records for over 10 years, over that time I have notice the prices remaining static thankfully for these rare groove classics. 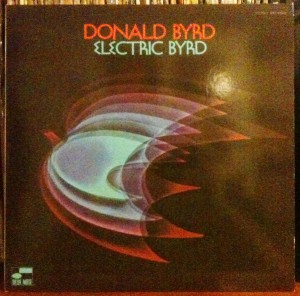 Blue Note records already are in such demand that I suspect eventually once people grow more frustrated at the prices the 50’s and 60’s Blue Note’s, they may focus their attention on these 60’s and 70’s organ jazz or other rare groove classics.

With people’s musical interests broadening during the iPod-happy 21st century,  that internet exposure of so many varieties of music variety give people so many options today.

Most of the albums talked about here can easily be had on vinyl in the 15-30 dollar range, even more cheaply if you are auction patient.

Most of these titles are now available either on download, or reissue vinyl of one type or another, perhaps your local library could be an option if you just want to get a taste of the genre?

Jimmy Smith: In a class by himself

Jimmy Smith revolutionized the clunky Hammond B-3 into a viable working machine for cranking out soul-jazz hit after hit. Jimmy probably should be considered the father of soul-jazz. Along with Ray Charles and Horace Silver, they combined the gospel style sound with hot r&b. 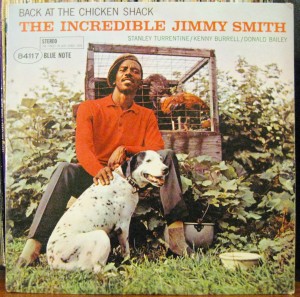 Tenor Man Stanley Turrentine’s sultry sax tone is also a mainstay of this early soul jazz, check out the duo of Turrentine and Smith below on “Minor Chant”

Smith really doesn’t fit neatly into the “rare groove” genre on Blue Note. Later on with Verve Records he created some pretty funky albums like the stellar Root Down. With Blue Note, we are talking straight ahead soul jazz that still leans to the hard-bop style.

Albums like Back at the Chicken Shack, and The Sermon are absolute jazz and soul jazz classics, they can be pointed to as the foundation of the funky more commercial styles that came later in the late 1960’s, and throughout the 1970’s.

*All vintage LP Cover Photos are my own*