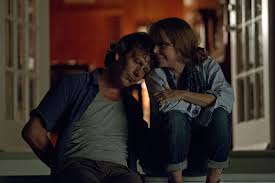 We are finally shown the story of Sarah.

The sister whose tragic death is what tore the Rayburn family apart.

Danny awakes from his dream of her, his sister who died so young, to the wailings of his mother on the beach. In her arms she cradles her husband who has collapsed, dead.

Now the family must come together to make the decisions they’d been putting off. Sitting around the kitchen table, they share their last memories of their father and Danny lies about his conversation with Robert, planting the idea in his siblings heads that things were okay between the two. In the meantime, a funeral must be planned.

The funeral brings people from the past, paying their respects. Among them is a retired detective whose presence upsets the family. Danny spots the man at a diner and has to leave, afraid to say anything, but runs to John to let him know the man is in town. John is not pleased by this news and it starts a whole new series of memories to share with us, letting us know that the story of Sarah isn’t as simple as we might have thought a few minutes before.

The detective becomes a sounding board for John to go over the details of his case involving the bodies that have washed up on his shores. It gives John a way to vent, connect and reminisce about his past that haunts him more than we’ve been led to believe.

In his investigation of the burned bodies, John ventures into the evidence locker and locates the box containing the investigation into the supposed car accident that severely injured Danny right after his sisters death.

What John discovers is that someone else has also explored the box and has taken the taped recordings of the interviews of each of the children. John has the transcripts and he remembers the stories. But now that detective Potts has given those tapes to Danny, he’s going to know how far his father went to hide this terrible secret.

Danny is shaken by the tapes and continues to rely on prescription medication and his strange attachment to a woman who appears to only exist in his mind for relief. His continued bizarre behavior makes this character even more fascinating to watch. His every move, every facial expression tells us more and more about what could be going on in his head. We think we know, but we don’t.

In the meantime we begin to see into Kevin’s messed up life. He’s going through a divorce, living at the marina and he’s angry about it, even though the couples problems seems to stem from his inability to grow up. His wife wants to be married to a man, not a baby. But Kevin keeps acting like a baby.

When Danny takes off for a weekend, we get a glimpse of the hard core life he’s been living. Or, we get to see what self destruction looks like; between the drugs, alcohol and his wild mouth, it seems this man has a death wish.

But based on what we’ve seen so far, Danny has more than a death wish for himself. He’s got a black cloud brewing for the whole family.