Blackwork Embroidery – As Easy as Cross-Stitch 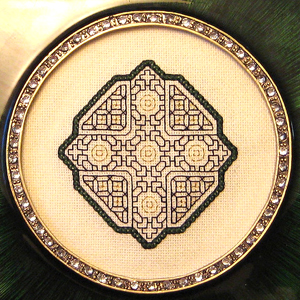 The enduring appeal of blackwork embroidery, first brought to Europe by men returning from 13th century Crusades, owes much to its simple elegance – black stitching on white or off-white fabric.

Even the most seemingly complicated designs are produced with simple stitches used to give light and shade, as well as pattern and symmetry to the work.

Historically, the most popular use for blackwork has been as embroidery on the clothes of royalty and the nobility and can be seen in many Elizabethan and Jacobean portraits.

Although not as popular today as cross-stitch, the craft of blackwork embroidery is growing in popularity because the stitches used are as easy as cross-stitch and the finished results are simply beautiful.

The Basics of Blackwork Embroidery

The commonly used stitches are easy and effective 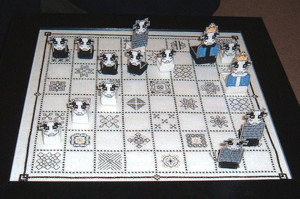 A blackwork embroidery chessboard – in the Public Domain from Wikipedia

Basically, blackwork is embroidery with black thread on white or off-white fabric. Usually, it’s done as counted thread work so an even weave fabric is ideal, if not essential.

Traditionally, this embroidery has also been done using red thread and, nowadays, people experiment with replacing black or red with other colours and sew onto black or other coloured fabric. What ever combination of colours is chosen, elegance of style and execution is the ideal outcome.

Most people use a simple back-stitch or running stitch. The latter is particularly popular for decorating collars or other items where both sides of the fabric can be seen. These two stitches are used in a variety of ways to create shapes, patterns and shading.

By using two strands of floss instead of one, a darker effect can be achieved to give a shadowed effect or more emphasis. You can see this in the picture below.

An Introduction to Blackwork Embroidery

Here’s a good guide for beginners. It shows you the absolute basics from how to start stitching to following a blackwork embroidery pattern.

Beginners to Blackwork by Lesley Wilkins 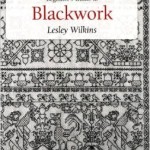 Online videos are a great help for beginners to a craft like blackwork embroidery but I think they are best used as an additional resource. In my experience nothing can beat a good book on the subject that is well-illustrated and written by an expert.

This book covers the basics stitches used in the embroidery and the basic techniques. Just as important, it also provides many photographs of blackwork and as well as charts to allow the reader to produce the patterns.

The charts range from simple motifs to advanced and more complicated patterns so taking the beginner through levels of difficulty as they progress and gain confidence in their embroidering techniques.

The book is also available from Amazon.co.uk

The History of Blackwork Embroidery

Most Popular in the 16th and 17th Centuries 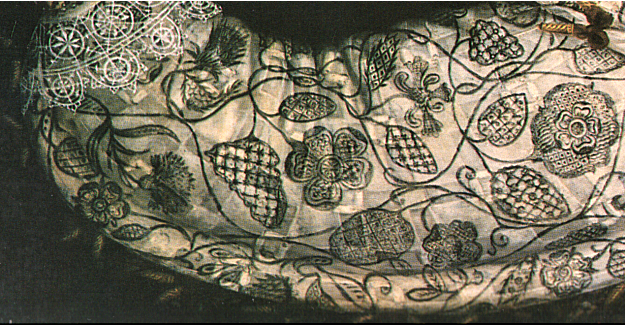 A dress sleeve decorated with blackwork embroidery dating from the 1590s. Picture in the Public Domain on Wikipedia

Looking at very early blackwork embroidery with its abstract but ordered designs, you can see the Arabic influence from tiles, stone tracery and other historic Islamic art. Although blackwork became most popular in the 16th and 17th centuries, it is believed that it originated in the Arabic and Moorish lands of North Africa and it was the Crusaders returning to Europe who introduced it to Europe.

Catherine of Aragon, first wife of King Henry VIII, made blackwork embroidery fashionable in 16th century England. She had a reputation as an expert needlewoman and is said to have stitched blackwork designs on some of the King’s own clothes.

Whether this is true or not, the Tudor portraits of the time show blackwork on the clothes of both men and women. Some have extensive embroidery such as the sleeve shown above, while on other garments, blackwork is used on details like collars and cuffs or perhaps the edge of a woman’s white cap.

During this period the style of blackwork changed. It became less stylised and more flowing with an emphasis on flowers, leaves, birds and many other motifs.

In the 17th century, the popularity of blackwork began to decline and has since been used by embroiderers who enjoy and appreciate the elegance achieved by working with black thread on white or off-white fabric.

Blackwork embroidery on a cuff of a dress from the 1530s. In the Public Domain on Wikipedia 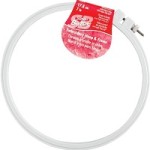 I always use either an embroidery hoop or frame depending on the size of the work and the fabric. Keeping the fabric taut and straight stops it twisting out of shape as you sew and also maintains an even tension in your stitching. It keeps the work cleaner too. Even with a hoop or frame, the natural oils on hands can give a distinctly grubby appearance to the finished work. Of course, washing it gently and pressing carefully, restore it to pristine condition.

Here’s a plastic embroidery hoop designed with a texture that stops fabric slipping as you sew. It’s just one of the many available online and in craft stores. If you prefer a more traditional material for your hoop, you can still find many wooden ones in all sizes from small to large.

Here you are shown how to use running stitch to produce different effects in blackwork. I’m sure you can see how very easy blackwork embroidery is to learn.

The Blackwork Archives
This is a well-established site that I first visited at least 5 or 6 years ago. It contains a wealth of free blackwork patterns including borders, filling patterns, leaves, fruit, flowers and much more. This is a must visit page.
16th Century Blackwork Sampler Patterns
Here are a few patterns suitable for blackwork samplers.
Pattern for Cuff Shown in Blackwork History above
If you liked the embroidery on the Tudor cuff shown at the bottom of the The History of Blackwork Embroidery section above, here’s the pattern for it. Just click on the pattern to get a larger picture to print.
PDFs of Blackwork Patterns to Download
There are links to four PDFs on this page containing more than 200 blackwork fill patterns which you can print off.
Six Sample Blackwork Patterns to Download
Here are six different complete blackwork patterns. Each will give you a complete work ready for framing when you finish it.

I've been writing about antiques, collecting and crafts for over 20 years. First I wrote for specialist magazines here in the UK, then I started writing online which I now do exclusively. I am a member of the Amazon.com and Amazon.co.uk affiliate advertising programs and can earn commission on items advertised on my pages here.