Grasshopper Jungle: Is it the must-read young adult novel of 2014?

Only if you don’t mind 400 tedious pages of sexism and male adolescent fantasies, in this reader’s opinion. 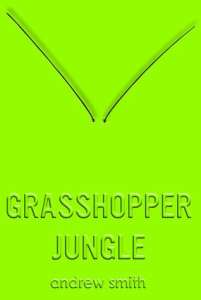 Grasshopper Jungle by Andrew Smith. Get it now at Amazon.

When the best-developed and most sympathetic female character in a novel is the narrator’s mute Golden Retriever, I don’t think it’s unreasonable to say a work may have some serious issues with sexism. The work in question here is Andrew Smith‘s Grasshopper Jungle, one of the most hyped and highly-praised young adult novels released so far in 2014. In fact it’s already been acquired by Sony Pictures after just being published in February.

That the book is labelled for young adult reading given some of its very mature content also gives me some pause, but I’ll get to that later. Mostly I am just left wondering how a book which starts out so strong, with such a unique apocalyptic storyline and promise of exploring bisexual identity, ended up disappointing and outright angering me on so many levels. Then again, I realize I’m probably not the target audience of this  novel as a 40-something woman tired of bisexual erasure in our society instead of a 16-year old boy in hormonal overdrive. Mine certainly seems to be the opposition opinion of the book, but I would still caution readers that it is likely a book you will either love unquestionably or hate with a passion. There seems to be little middle ground in opinions.

Not much ever happens in Ealing for 16-year old horny boys, and there doesn’t seem to be anything to do except smoke,  think about sex, go to the movies, and eat pizza. But one day Austin and Robby get beaten up by some kids from another school, in the parking lot where the boys go skateboarding. This incident sets off a series of events that leading to the hatching of 6-foot tall “Unstoppable Soldiers”—and the eventual end of the world. The Unstoppable Soldiers look like giant praying mantises and only have two objectives: to eat (humans, preferably) and to reproduce. It takes some time for Austin and Robby to figure out what is going on, and by the time they do they may be lucky to save themselves, never mind the rest of humanity.

“Robby called me Porcupine because of how I wore my hair. I didn’t mind. Everyone else called me Austin.
Austin Szerba.
It is Polish.”
― Andrew Smith, Grasshopper Jungle

Initially I was drawn into Smith’s writing and the bizarre story, the quirky elements and details that painted a colorful picture of small town life and the strange things that can happen beneath the surface of a rural community. There were elements that felt like a homage to Kurt Vonnegut (one of my favorite authors of all time), combining the surreal with the completely mundane. I wanted to see how the romantic triangle of Austin, Robby and Shann would play out, and there were some poignant moments like when Robby takes Austin with him one night to the only gay bar in a nearby town, a bleak place which Robby fears may be his future. But as Grasshopper Jungle dragged on (and boy it does drag, bogged down by too much repetition and detail that goes nowhere), I found myself getting bored and annoyed by these characters who were becoming less—not more—sympathetic to me.

I also had issue with Austin as a first-person narrator who at the same time seems to know exactly what other characters are doing and thinking at every point of the story, everyone from the Vice President of the United States to Robby’s mother and her sexual escapades with the Chinese cook from The Pancake House. While Austin sees himself as a “historian” and there is an explanation of how he supposedly knows all these things at the very end of the book, I still found it a difficult to explanation to accept—and an aspect of Smith’s style I did not care for and thought was sloppy and weak.

I was also bothered that for a story so much about a boy struggling with his sexual identity, and questioning his attraction to both his girlfriend and his best male friend, that it took 340 pages (over 85% of the novel) before the word “bisexual” was even mentioned as a possibility (by Robby, no less, and Austin immediately says he does not think he is bisexual.)

Um. (To use another word entirely over-used in Grasshopper Jungle.)

Okay then. Bisexual erasure is still such a problem today, it would be nice to see it actually discussed and not dismissed, especially in a book aimed at teen readers who may find themselves facing such identity issues themselves. And speaking of that teen audience, I was a bit surprised after finishing the book that it was actually categorized as Young Adult, given the foul language, strong sexual language and themes, and glorification of smoking. I get that these are issues that teenagers think about a lot and that some may act upon, but I might caution parents to preview the book before deciding if they feel it’s appropriate for their children to read (certainly younger teens.)

Truly, though, my biggest problem with Grasshopper Jungle was the author’s treatment of the female characters and the sexism that permeates just about every aspect of the story. But I warn that there are SPOILERS BELOW, so continue reading at your own risk…

Austin’s girlfriend Shann only serves two purposes in this entire book: to be a lust object for Austin, and to be “bred” so they can continue on the human race after the apocalypse. She is left unaware by Austin and Robby of what is going on in Ealing until absolutely necessary; Austin sees nothing wrong with lying by omission…certainly not to Shann.

Austin mainly seems fixated on figuring out how to get Shann to have sex with him throughout the entire novel. Eventually he succeeds, and of course that one time they have hurried sex is enough to get her pregnant, to give Austin the (male) child he (obviously) won’t be having with Robby. He also uses the child to reclaim his Polish name and heritage…how noble of him. Of course that sexual encounter is all about Austin’s enjoyment and needs, and he gets annoyed at Shann because she’s upset that it hurt and he didn’t use protection the way he’d always promised her he would.

But it gets odder. In the underground shelter where Austin, Robby, Shann and a few other characters end up living to escape the insect apocalypse, Austin takes care of their child seemingly on his own; the boy sleeps in Austin’s room (which he does not share with Shann.) Meanwhile, Robby and Austin go off on great adventures on their own, leaving Shann and everyone else behind while they go do “guy things” together and generally continue their bromance away from their responsibilities to the others.

The other female characters get no better treatment. Both Austin and Robby’s mothers are doped up on pills all the time. Robby’s mother is just another lust object for Austin (she opens the door in her underwear one day, which of course makes Austin horny)—and she is a good cook as well. What more could a teenage boy want? Ingrid, Austin’s pet dog, lost her voice due to a throat tumor years before, therefore she cannot bark or make any noise whatsoever. Somehow I get the feeling that that’s pretty much what Andrew Smith thinks makes for an ideal woman: someone who is just there to provide comfort but keeps her mouth shut.

I have not read any other books by Andrew Smith before, and I can pretty much say that after finishing Grasshopper Jungle I’m in no hurry to do so, either. I can get plenty of sexism and misogyny elsewhere, thanks muchly. I think I’d much more enjoy a re-read of Cat’s Cradle, Mother Night or Breakfast of Champions, three books which greatly shaped me and helped me through my young adult years.