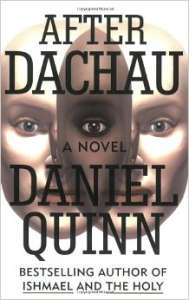 After Dachau by Daniel Quinn. Buy it now at Amazon.

“History is a set of lies agreed upon.”

Those famous words spoken by Napoleon summarize one of the major themes of Daniel Quinn’s After Dachau. Published in 2001, this novel is far from the first to propose an alternative history wherein the Germans were victorious during World War II. Nor is it the first novel to examine the idea of reincarnation and discovery of past life experiences, but it is certainly the first I’ve read to combine both of these ideas into one storyline.

Whether After Dachau succeeds or not in that combination is rather debatable, in my opinion, and the book is one readers either seem to love or hate. I found it extremely thought provoking and disturbing, and well worth the quick, page-turning read (at just a little over 200 pages, I finished the novel in a single day.)

The book centers on Jason Tull Jr., born to a wealthy family and living an extremely comfortable life free of any real responsibility. While his Uncle Harry would like to recruit Jason for work in “Intelligence”, Jason decides to pursue a more obscure search for knowledge at the “We Live Again” non-profit organization. Their goal is to find concrete evidence that reincarnation is real, to verify reports of individuals remembering past lives that cannot be explained away by any other explanations.

Jason thinks he may have finally come upon that “Golden Case” with Mallory Hastings, a young woman who awakens from a coma with no memory of her life and a completely different personality. Jason wants to find out who Mallory thinks she now is—who she was in a past life, if that is what she is remembering—but the answer is so shocking, it threatens to tear apart everything Jason knows about the seemingly perfect world around him.

To say too much more about the plot of After Dachau would be to give away some of the novel’s best twists and surprise revelations. At first, Jason’s world, which appears to be the late 1990s-early 2000s, seems confusingly lacking in the technology of the times. No one mentions computers or uses email, and the absence comes across as puzzling until all is explained of what exactly has happened in this alternative timeline. The story begins as a puzzle and a mystery, but then shifts gears as Jason seeks to learn more about “modern” history as Mallory recalls it and seeks to share his discoveries with others. But will anyone actually care that they have been fed “lies” about the past? Does any of it matter, when those events cannot be changed?

This book is one more about ideas than characters; indeed, neither Jason nor Mallory are particularly likeable or engaging protagonists, but I don’t think we are supposed to find them so. Jason is a product of his times, of his upbringing, and the world of this alternative timeline. Instead I was drawn into the world-building and the details of how history—nor just of World War II but all of Classical Antiquity onward—was reshaped to suit the victors’ point-of-view. How many times has this happened in our actual past? How much of the history we take as “truth” today is really how things happened, of Ancient Rome and the rise of Christianity; how much of Jesus Christ’s life story is real versus convenient fiction? These are the thoughtful questions I was left with at the end of After Dachau, and ones that I will continue to ponder for some time to come.

I think my biggest issue with the novel was the use of the reincarnation plot device. That element of the paranormal and fantastic did not seem necessary to me, and took away from the creepy believability of this alternative world. There are other ways Jason could have started to find out the truth—uncovering ancient writings and artifacts long believed destroyed or buried (as happens anyway in the story) or perhaps the discovery of a small group of people long thought “exterminated” who had somehow managed to survive in secret. It didn’t ruin the book for me, but I really didn’t think the reincarnation elements added much to it either.

I have not previously read any books by Daniel Quinn, who appears to be more well-known and liked for other works such as Ishmael and The Story of B, novels which similarly ask the reader to take a different look at mankind’s history and our beliefs. I will certainly be putting some of these titles on my “to-read” list for the future, and I do recommend After Dachau for anyone interested in dystopian fiction that truly challenges our perception of reality and today’s society.