Review of the Beatles Tribute Band Performance from December 18, 2010 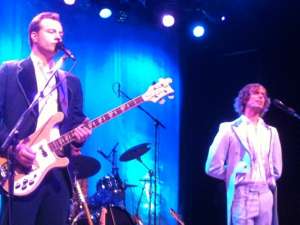 Abbey Road Live! At the Variety Playhouse in Atlanta, Georgia. Photograph by sockii.

Fans of The Beatles should grab the opportunity to see tribute band Abbey Road Live! if they ever get the chance. This group of four musicians from Athens, Georgia puts on a show that plays tribute to the Beatles’ music, while still keeping it fresh, exciting and completely relevant for today’s audiences. On December 18, 2010 at the Variety Playhouse in Atlanta, Georgia, Abbey Road Live! put on a rocking, nearly three-hour performance. Playing 36 much-beloved songs, the audience of young and old Beatles fans sang and danced along with enthusiasm the entire length of the show.

Whereas many other Beatles tribute acts concentrate on playing dress-up and trying to recreate the look of the band onstage, Abbey Road Live! instead concentrates solely on the music. They also focus on the “studio years” when the Beatles stopped touring, originally only performing the “Abbey Road” album but now having a repertoire of over 100 Beatles songs practiced and at their disposal. Abbey Road Live! consists of guitarist Tim Conley, bassist Dave Domizi, drummer Andrew Hamner and guitarist/keyboardist Michael Wegner. For some shows, as in Atlanta, they are backed by the “Magical Mystery Horns” and “Lonely Hearts Strings,” allowing them to perform some of the more elaborately orchestrated later Beatles songs.

Abbey Road Live! hit the stage a little after 8:00pm in Atlanta on December 18, starting off with the slow-rocking, groovy “Come Together.” By the second song, “Day Tripper,” the audience was getting to their feet and ready to rock and dance. The band showed off their impressive ability to harmonize like the Beatles on “Nowhere Man,” and then let drummer Andrew Hamner take the mike for Ringo Starr’s fun and campy “Octopus’s Garden.” Michael Wegner, the band’s “George Harrison,” switched between keyboards and guitar regularly, along with playing sitar on a fine version of “Norweigan Wood” and clarinet for “When I’m 64.” 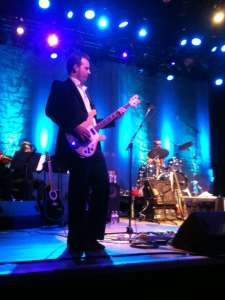 Abbey Road Live! At the Variety Playhouse in Atlanta, Georgia. Photograph by sockii.

Each member of Abbey Road Live! is clearly a talented musician in his own right – in fact most play in tribute acts for other bands, such as the Pink Floyd tribute “Pigs on the Wing.” Dave Domizi especially impressed with his bass work, which helped illustrate how important Paul McCartney’s basslines and style were to creating the Beatles sound. His vocals were not quite as nuanced as Paul’s, but he did well enough, especially on the more rocking numbers such as “I’ve Got a Feeling” and “Golden Slumbers.” Tim Conley was impressive as the “John Lennon” of the group, switching guitars regularly and amping up the energy of the solos, especially on their phenomenal version of “She’s So Heavy.” Again, his vocals weren’t spot-on in imitating Lennon’s, but he conveyed the spirit of those songs well, notably on “Lucy in the Sky with Diamonds” and “Strawberry Fields Forever.”

If there is one weak link in the band, it is perhaps drummer Andrew Hamner. While his playing is proficient enough, he seems to lack being able to nail that trademark “Ringo shuffle.” While many seem to believe Starr is not the best drummer in the world, his style is intimately important to the feel of the Beatles music, and on some numbers Hamner couldn’t quite get it. For instance, “Hello Goodbye” lacked the complex, melodic tom fills so integral to the song. That said, he brought a strong and driving beat to other numbers such as “Taxman” and “Hey Bulldog,” and had a chance to indulge in a crowd-pleasing extended solo for “The End.”

With only one brief intermission, the show did not finish until 11:00pm, treating the audience to nearly three hours solid of Beatles favorites. The night ended on a positive, upbeat note with “All You Need Is Love,” with horns and strings swelling to a joyous climax as audience and band joined together on the vocals. Abbey Road Live! primarily performs in small clubs around the southeastern United States and at large Beatles festivals, so seeing them in a wonderful venue such as Atlanta’s Variety Playhouse was a treat. Should Abbey Road Live! be coming to your area any time soon and you love the music of the Beatles, don’t miss the opportunity to check them out. Their performance may give you a new appreciation for the Beatles, or simply reaffirm the timeless power of their words and music. 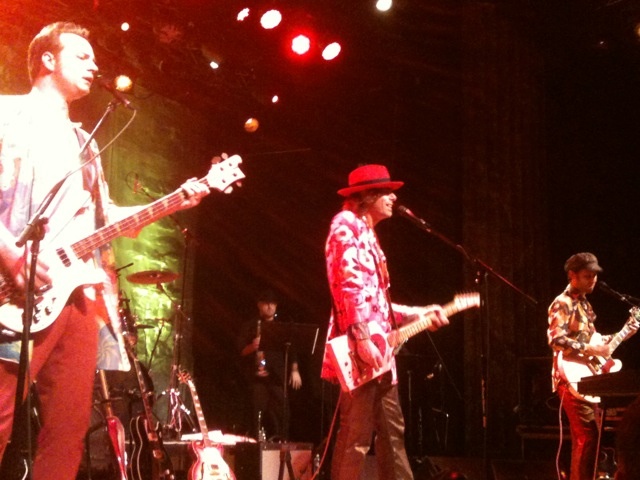 “Sgt. Pepper’s Lonely Hearts Club Band“
“With a Little Help From My Friends”
“Lucy in the Sky With Diamonds”
“Hello Goodbye”
“The Long and Winding Road”
“Magical Mystery Tour”
“I Am The Walrus”
“When I’m 64”
“Strawberry Fields Forever”
“Penny Lane”
“Help!”
“Taxman”
“Let It Be”
“Baby You’re a Rich Man”
“Sgt. Pepper Reprise”
“A Day in the Life”

“While My Guitar Gently Weeps”
“Yesterday”
“All You Need is Love”