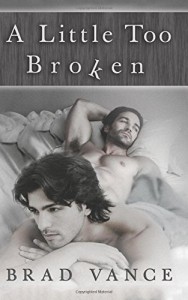 “A Little Too Broken” by Brad Vance. Available in print and ebook versions at Amazon.

Jamie and Tom are two “broken” individuals. Jamie hasn’t been with anyone since his last (drug-pushing, abusively dominating) boyfriend infected him with HIV—he’s convinced he’s now unlovable and destined to be forever alone. Tom, who is former military, lost both of his legs in Afghanistan. And while he’s now doing well on prosthetics and with his companion dog, he suffers from PTSD. He’s also completely in the closet to his family and feels both that and his disability means he’s destined to be forever alone as well.

Jamie and Tom cross paths one day at the Humane Society and both secretly feel immediate attraction to each other. But no, it can never be, right? So they both will just pine and fantasize about the other instead, even when Jamie offers to volunteer at the Canine Comrade Corps where Tom works, training shelter dogs to be companion animals for other vets. Will Tom and Jamie be able to get past the obstacles in front of them—both real and in more specifically in their minds—in order to find love at last?

That’s the plot of Brad Vance’s A Little Too Broken. Yes, basically, that’s all the plot there is: two supposedly adult men angsting like teenage girls over how unloveable they are while highly attracted to each other. True, they’re both affected by events which have forever changed their lives, but neither man is given much character development beyond their disabilities. Jamie has a cat, and a (so stereotypical for m/m fiction) straight girlfriend whom he sulks with about being alone. Tom has his companion dog, Harry, one friend from the military who knows he’s secretly gay (Ed) and a small family with a conservative dad who watches Fox News and constantly asks Tom’s sister when she’s getting married. It feels all very neat and cliched and with none of these characters sufficiently developed in the book’s short length to feel real.

There’s one moment of drama when a veteran comes in to the CCC and threatens violence, when I thought the book was going to finally kick into some more interesting gear, but nope. The incident is used only as a vehicle for Tom to fall back into depression, for Ed to meet Jamie and then become matchmaker. And the whole big angst over coming out to his family ends up being a whole lot of nothing.

Along the way, the reader also must endure being lectured to about the evils of the American health care system for both veterans and those dealing with pre-existing conditions like HIV. Real issues to be sure, but such heavy-handed moralizing was not worked well into the story here. Additionally, the writing is quite sloppy. There’s near constant head-hopping in the narrative point of view between Tom and Jamie, at times so quick as to leave my head spinning. Scenes shift from one paragraph to the next with no break; one moment we are at the CCC with Jamie and Tom talking, the next we are at Tom’s parents house for Sunday dinner. Wait, what?! This book could have definitely used some editorial assistance.

All in all, this was a disappointing read for what seemed like an interesting premise. I wish I could give A Little Too Broken a positive review, as half of the royalties from the book are being donated to Iraq and Afghanistan Veterans of America and the Wounded Warrior Project. But I can only give it * (1 out of 5 stars) because the writing just didn’t make for an enjoyable or memorable read for me.