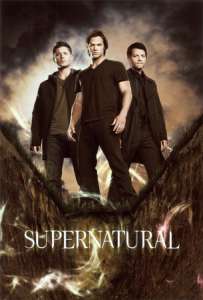 “Supernatural”: One of the more popular fan-fiction fandoms in recent years. Print available from AllPosters.com

You’ve probably heard about “fan fiction”, even if you have never read it or written it yourself. Fandom culture is becoming increasingly mainstream, and fan fiction is no longer something only enjoyed at private conventions and in secretive, mail-order fanzines and newsletters.

Today, fandom is all over the internet – and fan fiction in particular, as fans share stories continuing the adventures of their favorite characters on websites, archives and other forums.

But what do you really know about fan fiction and the people who write it, and enjoy reading it? There are a lot of misconceptions out there about fanfic – many more than I can take on in a single article or essay. However, I’m going to tackle five of the biggest, most common myths about fanfic and its fans in this article. Who knows, maybe by the end you’ll be curious enough to give some fanfic a try yourself!

“Fanfiction is a work of fiction written by fans for other fans, taking a source text or a famous person as a point of departure.”

That source text can be almost anything: a tv series, a movie, a comic book, a work of literature, a historical figure, even a modern day celebrity. Fan fiction is not a modern invention, as writers have taken inspiration from others texts and works for centuries. (See: “Writers University: A History of Fan Fiction”.) However with the advent of popular media culture, including television and pop music, “modern” fan fiction had really began to take the shape and cultural structure that it has today.

In any amateur field – be it writing, painting, crafting, you name it – you’re going to find a lot of inferior creations, no doubt about it. But then again, don’t forget Sturgeon’s Law: “Ninety percent of everything is crap.”  I would argue that there’s plenty of terrible professionally published fiction out there as well; the only difference between it and fanfic is that the pro-fic is generally better edited and proofread.

Fan fiction is something fans do for fun, and to share with like-minded fans. They (generally) don’t do it with aspirations of writing the “Next Great Novel” or winning any literary awards. That said, many writers do take pride in their work and attempt to make it the best they can. Beta-readers are often employed by fanfic authors to proofread, make suggestions, and check for overall story “flow” before submitting a story to an archive or other site.

If you’re struggling to find good fan fiction, then it might be worth checking out some of the recommendation sites and communities that are popular – they can often be a good starting place for finding better quality fan fiction. One of the biggest such communities is the LiveJournal group Crack Van, which has an extensive library of recs in all different fandoms.

Fan Fiction Myth #2: People who read and write fan fiction have no life

There’s a misconception that people who are into fan fic, either reading it or writing it, are just a bunch of geeky “nerds” or “losers” who have no life. They would rather hide in a dark room reading about the further adventures of Harry Potter than get out into the world and socialize with other people. Indeed, this misconception is often applied to people involved in organized “fandom” as a whole.

Obviously this is again untrue. Would you make the same assumption about someone who is an avid reader of professionally published literature? Or writes non-fiction as a hobby for a website (such as this one) or personal blog? Fan fiction is just another hobby and pastime that some people enjoy which many mainstream people don’t “get” – hence they think there must be something wrong with those people who do like it. Is being into fan fiction any weirder than, say, playing in a Fantasy Football League?

Of course there are those who take their interest in fanfiction too far; just like any hobby or activity it can be an addiction to some, a way to “escape” from responsibilities and difficulties in life by devoting too much time and attention to it. But to think that all fan fiction fans and writers fall under that description is completely untrue.

“If something exists, there will be p*rn about it somewhere on the internet.”

However, to assume or believe that such adult-oriented writing constitutes the bulk, or even a majority, of fan-fiction out there is completely untrue. The largest fanfic site on the internet, FanFiction.Net, specifically does not allow adult-oriented content (although some users do try to skirt that rule). Many people write romantic fan fic stories without explicit content, and there are many avid fans of “gen” (that is, no romance) stories as well. Gen fanfic is especially popular in science fiction fandoms, where writers enjoy continuing to explore the unique world-building of the source series, such as Star Trek, Babylon 5 or Star Wars. Crossover fiction, where perhaps characters from Buffy The Vampire Slayer meet up with Sherlock Holmes, are also often gen stories without any romantic, or erotic, content.

Fan Fiction Myth #4: You’ll never have a chance as a professional writer if you waste your time on fan fiction

Ever heard of “Fifty Shades of Grey”? Did you know that the entire series originally appeared on-line and started as a Twilight “alternative universe” fan fiction? Well, that author is certainly laughing her way to the bank right now. For an interesting look at the entire evolution of this phenomenon, I recommend the article “The Lost History of Fifty Shades of Grey”.

E L James is far from the first author who began in fan fiction and then became a successful “original fiction” author. Of course not all just tweaked or reworked their fan fiction for publication; many moved on to create entirely new worlds, characters and storylines, but certainly used their experience in fan fiction to practice their story-writing skills. Some of these authors even continue to publish fan-fiction for “fun” even after “going pro” – although they may be cautious about separating their professional publishing name and identity from their fannish one.

The point is, writing and enjoying fan fiction won’t destroy your chances of becoming a successful professional author, if that is your goal. And beyond that, many fan fiction writers have no interest in going professional. They simply enjoy writing as a hobby and wouldn’t want the pressure of submitting to deadlines, editing, and marketing their work.

Fan Fiction Myth #5: People write fan fiction because they have no imagination

“Why don’t you just come up with your own characters and stories? Why do you have to steal someone else’s work?”

I’ve heard the above statements numerous times in criticism of fanfic and fanfic authors. First off, I’d like to point out that there is a lot more to crafting a story than creating characters. You need to be able to come up with an interesting plot line; good dialogue; descriptive writing…these all require imagination and skill, whether you are writing fan fiction or original fiction.

It is also a unique challenge to try to capture another author or creator’s characters in your own work. Does your Harry Potter act and talk like JK Rowling’s? Is your Captain Kirk recognizable as the same character in the Star Trek tv series and movies? A sign of quality fan fiction is often when you can read it and say, “Wow, I can totally picture this happening on screen!” It’s just a different writing skill set than when you write completely original fiction.

Books on Fandom and Fanfiction

Learn more about the culture and history of fan fiction, and fandom culture

CHECK PRICEEnterprising Women: Television Fandom and the Creation of Popular Myth (Contemporary Ethnography)
This book was one of the first full-length academic studies of fandom and fan-fiction culture – and specifically that of women participants in media fandom. Published in 1991, it ends just as the internet was beginning to take shape as a forum for fannish interaction, however it gives an excellent overview of the “early days” of fanfiction in fanzines, the types of stories being written, and how this fannish culture split off from and developed away from more male-dominated science fiction fandom.    CHECK PRICETextual Poachers: Television Fans and Participatory Culture (Studies in Culture and Communication)
Jenkins’ 1992 work is considered an excellent study of fannish culture – especially as the author is a self-admitted fan himself! While much of the same ground is covered as in “Enterprising Women”, the viewpoint is a bit different and perhaps more “positive” about certain tropes and genres of fanfic, and why so many enjoy it.    CHECK PRICEFan Fiction and Fan Communities in the Age of the Internet: New Essays
This 2006 book bridges the gap and shows how fandom culture continued to evolve in the internet age. Now that fanfiction could be shared online in mailing lists, archives, forums and other communities, the entire fanfic culture itself changed in many ways.    CHECK PRICEThe Democratic Genre: Fan Fiction in a Literary Context
Sources as diverse as Jane Austen and Blakes 7 can inspire fan fiction…what is the draw and fascination for many? By looking at several different, specific fandoms the author examines fan fiction tropes, definitions, and how fan fiction is a worthy genre of literature in its own right.