During the introduction to the Cooking Channel’s popular program, My Grandmother’s Ravioli, we see a young Mo Rocca in photos as he shares a story about his grandmother, whom he calls Momma. She made elaborate Sunday dinners, but alas, he never learned to cook like she did…and now it is too late.

His mission is to visit grandparents across America and share not only their recipes, but the stories behind them.

This show is one of my family’s favorites. For me, it brings back many memories of being in the kitchen with my mom, my Nana, and my aunties during various holidays over the years. It was during Rosh Hashanah, (the Jewish New Year), Thanksgiving, and Passover that I learned how to peel carrots, make a kugel and make chopped liver amid the laughter and noise of the women in my family.

Unfortunately, my three children never got to experience what I did. With family scattered around the country and a grandmother who is disabled and unable to stand and cook, I am the one who has had to teach them how to make all of these foods, as well as favorites from their father’s Italian side.

My children and I discovered My Grandmother’s Ravioli by accident during a snow day as we were flipping the channels and looking for something to watch. It caught our eye and we have been hooked ever since.

Why do I love My Grandmother’s Ravioli?

1. The Grandparents and Their Stories

Over the past four seasons, Mo has introduced viewers to young grandparents in their early 50’s to one who was almost one hundred years old and still living on his own. The stories they share are both heartwarming and heartbreaking. We hear of great love in the long lasting marriages and the secrets that have kept them together. We also learn about great loss that still brings these seniors to tears decades later. There have been a few episodes where gay couples have shared their story, and it is amazing to hear what they had to overcome just to be together.

The grandparents do not intend to be funny, but they often are. Oftentimes, Mo uses a double entendre to make a joke, and the grandparent just looks at him quizzically. These create a lot of laugh out loud moments in my home. Other times they lose patience with his joking and sassiness and just want him to get down to the business at hand.

It is also surprising to see the older men cater to the women in their lives, especially since this was a generation who “wore the pants”, so to speak. It is apparent that many of them have mellowed over the years and defer to their wives-at least in the kitchen.

2. A First Hand View of the American Melting Pot

Various ethnicities and cultures have been showcased on My Grandmother’s Ravioli, such as:

In addition to learning how to make various kinds of foods with exotic sounding ingredients, we hear about their culture and their beliefs. It is through food that they not only show their love, but also pass down their heritage to the next generation…all without technology or a textbook.

Every culture has it’s own unique recipes. From Hungarian goulash (which s a soup and not a stew) to Greek spanakopita, these exotic sounding dishes are made in front of our eyes. While we may not want to try to make pig’s stomach at home, my son really wanted to make the homemade bread that Sonny, a grandfather from Vermont, made in a Season 2 episode.

Here is the result. 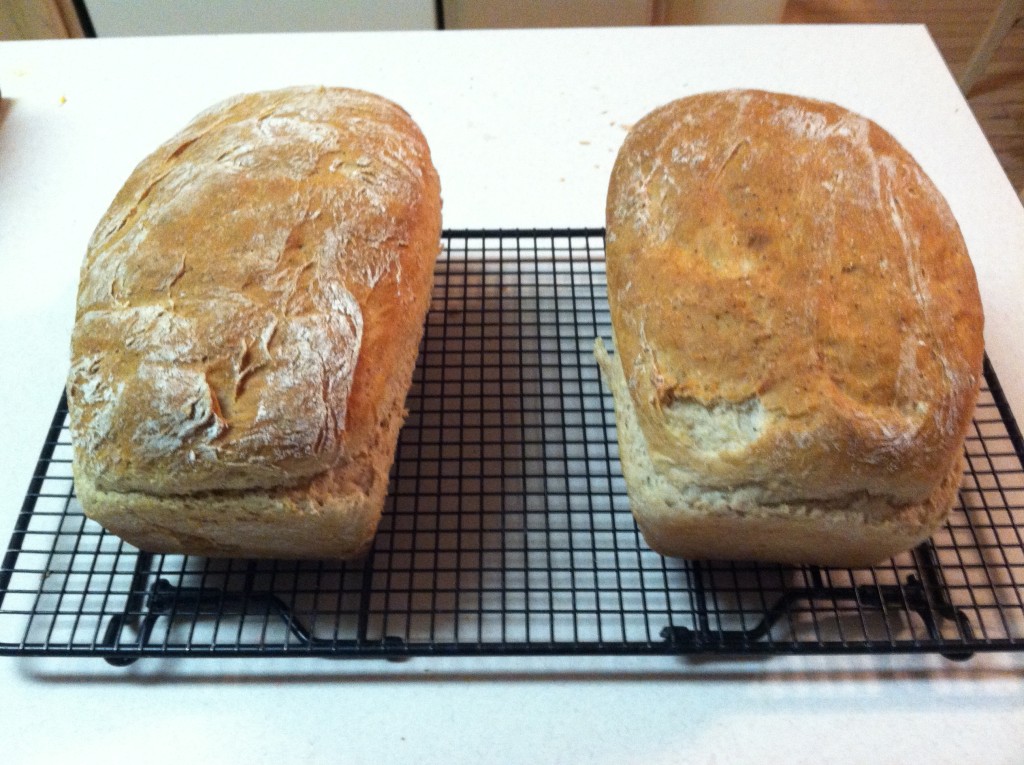 4. It Gives You a Warm and Fuzzy Feeling

If you were fortunate to be blessed with an able bodied grandparent who lived nearby or in your home, you know about that special kind of love between a grandparent and a grandchild.  I know that my kids get away with things that my mother would have scolded my brother and me for, but my kids do no wrong in her eyes.

During most of the episodes of My Grandmother’s Ravioli, grandchildren share how much they love their grandparents and how much they have learned from them. The final scene of the show, where family and friends gather around to eat what Mo helped prepare, is one of the most heartwarming things you will ever view on television.

I am fortunate to have many fond memories of my having my Nana in the kitchen when I was an adult. One of my favorite photos is of her, my twins, and my mom sitting around the table and peeling vegetables for her delicious vegetable soup. I actually videotaped her making my favorite things, often to her annoyance. She would have made a great episode of My Grandmother’s Ravioli.

If you have not had an opportunity to watch this show, I encourage you to do so. And if you are lucky enough to still have a grandma or grandpa who can cook, get them into the kitchen, cook alongside them, listen and learn.