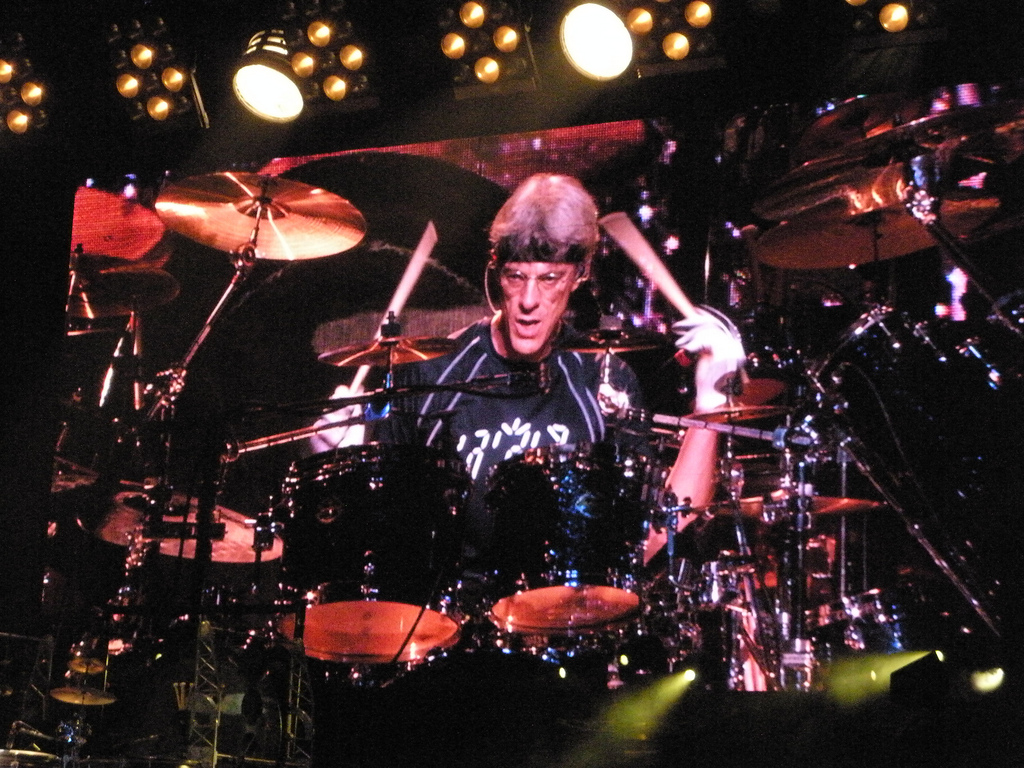 Stewart Copeland on stage with The Police, August 2008. Photograph by the author, sockii.

Stewart Copeland is one of the most influential drummers of the past several decades. To understand what makes his playing so powerful, check out these ten exceptional recordings.

This article was originally published at Associated Content on October 5, 2010.

Modern drummers quite frequently cite rock legend Stewart Copeland as one of their influences. His innovative, personality-filled approach to drumming was a large part of what made The Police one of the most successful bands of the late 1970s/early 1980s. He has continued to impress listeners and fellow drummers since then with his solo work and later band projects, including Animal Logic, Gizmo and Oysterhead. For those interested in hearing more of what exactly makes Stewart Copeland such a drum legend, listen closely to the ten tracks listed below. Each showcases Copeland’s unique skill and notable techniques in a different way, and overall these songs make for an impressive collection of percussion talent and ability.

“Synchronicity I” is the powerful, fast-paced opening track to The Police’s final studio album, Synchronicity. What is notable about the drumming here is that Stewart Copeland plays in 4/4 time against the song’s 7/4 time signature, his trick for keeping the song driving forward with impressive urgency despite the complex time. His tightly-tuned snare drum cuts through the rest of the instrumentation, in contrast to the fat, looser snare which had previously been favored by many drummers in the 1970s.

For the most part, Copeland took a straightforward, stripped down approach to his drumming for his recordings with the pop-rock trio Animal Logic after The Police. That said, “Stone In My Shoe”, from the band’s second album simply titled Animal Logic II, is a terrific example of many of Copeland’s trademarks, from the intricate high-hat work to his crisp snare attack. His playing here is a perfect complement to Stanley Clarke’s melodic bass guitar. One can also hear his preference for the deep, melodious sound of Tama’s Octobans over heavy tom-toms on drum fills.

During the Police’s early years, Copeland recorded a number of solo tracks under the alias Klark Kent. These tracks, such as the instrumental “Grandelinquent,” showcase Copeland pulling out all the stops, perhaps going into overplaying but still extremely enjoyable for drum enthusiasts. Splash, crash and high-hat cymbals all get a major workout on this track, which is also full of rapid-fire snare fills and other interesting percussive notes.

With his Orchestralli project, Copeland combined his modern approach to orchestral composition with more than a little touch of rock and roll rhythms and drumming. This track from the Orchestralli CD is a great example of his playing in such a context, full of complex rhythms and emotive cymbal-work. Yet he also does not dominate the music as he does with his rock band performances, taking a back seat here to the wind, brass and keyboard instruments. Some of his “three against four” style of play can be heard in the cymbal patterns also. As complicated as the music is, it maintains a driving beat throughout thanks to Copeland’s hard-hitting snare and tight high-hat work.

5. “Walking on the Moon” (from The Police album Reggatta de Blanc)

“Walking on the Moon” showcases another trick from Stewart Copeland’s repertoire, the use of trigger delays to create complex, echoing rhythms. By using a delayed echo, he is able to in effect “play against himself” and create a spacey, rich atmosphere out of an otherwise more simple drumbeat. The triggered echo can be heard strongly here on the rim shots at various parts of the song, such as the instrumental break at about 2:15. The song is also a good example of his playful, personality-filled high-hat work, with triplets and other fancy rhythms replacing the typical 8th and 16th note rhythms typically heard. In “Walking on the Moon,” the drums are almost the lead instrument in the arrangement, with the guitar and bass more in the background, holding the beat steady.

6. “Red Rain” (from the Peter Gabriel album So)

Anyone who doubts how well known Stewart Copeland is for his high-hat work alone needs to listen to “Red Rain” from Peter Gabriel’s highly successful album So. Copeland was brought in by Gabriel exclusively to play the high-hat on this track, and from the opening ten seconds of the song, there’s no doubt whose work we are hearing.

7. “Little Faces” (from the Oysterhead album The Grand Pecking Order)

For most of the 1990s, Copeland had virtually retired from playing the drums as he pursued a successful, high-demand career in television and film soundtrack work. In 2001, however, his return to the kit was announced with bravado on Oysterhead’s The Grand Pecking Order. The album’s opening track, “Little Faces,” starts with a complex rhythm of rudimentary patterns on the snare and cymbals and ends with a raging assault on snare and ride that leaves no doubt that Copeland is back in top form.

8. “Message in a Bottle” (from The Police album Reggatta de Blanc)

One of The Police’s most famous songs also features some of Stewart Copeland’s most notable drumwork. The high-hat triplets, fancy cymbal play (such as repeated crashes on the upbeats), and quick-fire drum fills make its sound distinctly his own. The only strike against this one is that Copeland himself admits that the drumming is heavily double-tracked, so there is no way for a single drummer to be able to capture all the rhythmic nuances of the song in a live performance. That said, he has also admitted he has at times taken great pleasure in watching and hearing other drummers try!

9. “Pseudo Suicide” (from the Oysterhead album The Grand Pecking Order)

The heaviest track on The Grand Pecking Order opens with an amazing barrage of flashy fills from Copeland, which continue throughout with hardly a break for air. This track also features some great double-bass pedal playing through the second half of the song, which was a new technique to hear in Copeland’s playing at the time, one he only started using with Oysterhead.

10. “Driven To Tears” (from The Police album Zenyatta Mondatta)

“Driven To Tears” is, in many ways, the quintessential Stewart Copeland drum track, showcasing his style and talents in many ways. In the song, his drumming sets the urgent mood, from the opening beats of the snare drum to the four-on-the-floor bass. His ride cymbal work has never sounded better than here as it propels the verses with character and flair. The atmosphere of each section of the song is changed by Copeland’s choices on the kit, from verse to chorus to instrumental break. It is a perfect example of how critical his playing was to the overall sound of The Police’s music.

So that’s my list…I’m sure if you are a Copeland fan you have your own favorite tracks which I’ve surely left off. Feel free to leave a comment about them below!